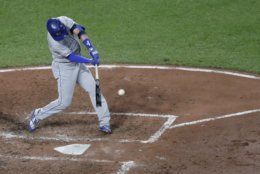 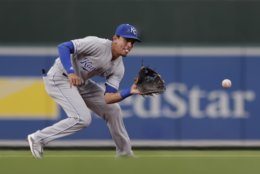 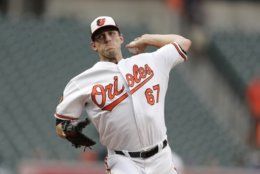 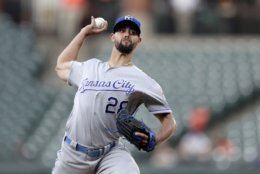 BALTIMORE (AP) — To most of the 11,659 fans in attendance and the rest of the baseball world, it was little more than a meaningless game between two teams long out of contention.

For Nick Dini, his family and friends, it was an unforgettable experience.

The 26-year-old Dini played high school ball in New Jersey, and when he learned he was going to be playing at Camden Yards, he had his family spread the word. Around 40 people, including his parents, grandparents and sister, showed up to watch the rookie catcher.

They did not go away disappointed. One pitch after Nicky Lopez went deep off Gabriel Ynoa, Dini sent a drive over the center-field wall to make it 5-2. Never mind that it ended an 0-for-10 skid; more importantly, it was his first long ball in 15 plate appearances as a major leaguer.

“It was a good moment. You dream about it, you think about it all the time coming up through the minor leagues then it happens and you’re just floating around the bases,” Dini said. “To be able to do it so close to home and have so many people here made it really special.”

“It is nice to see because they’ve worked so hard to get here and it’s been a lifelong dream to play in the big leagues,” Yost said. “It’s always a pleasure and a privilege to see a kid hit his first big league home run.

Kansas City (45-80) won for only the sixth time in its last 22 games, and Baltimore (39-86) absorbed its 13th loss in 14 games. The only team with fewer wins than these two struggling clubs is Detroit.

Orioles starter John Means (8-9) kept Kansas City hitless until Lopez led off the sixth inning with a single to spark a three-run uprising that wiped out a 1-0 deficit.

Jorge Lopez (2-7) allowed one run and two hits over five innings and Ian Kennedy, the last of five Kansas City relievers, gave up a home run to Rio Ruiz in the ninth before recording his 22nd save.

Jonathan Villar also homered for the Orioles, who have endured skids of five games (twice), six games and 10 games this season.

Royals 1B Chestor Cuthbert went 0 for 4 and is hitless in last 34 at-bats since Aug. 8.

Means and KC’s Bubba Starling, who played together at Gardner-Edgerton High in Kansas, faced each other in the big leagues for the first time. After their senior year, Starling signed with KC as the fifth overall pick in the 2011 draft and Means went to college after nixing a chance to sign with Atlanta.

Means got the better of his old friend in the reunion, retiring Starling on a grounder and strikeout.

“It was a cool experience,” Means said. “You never see two small-town Kansas kids go at it in the big leagues.”

Should the Orioles finish with the worst record in the majors, they will again get the No. 1 pick in the draft next June. That has absolutely no bearing on how they play over the final six weeks, manager Brandon Hyde said.

“We’re not going to stop fighting and competing,” Hyde said. “If you ask any player in (the clubhouse), they could care less about the No. 1 draft choice. It’s about trying to win every single night. Our coaching staff feels the same way.”

Royals: SS Adalberto Mondesi (shoulder) is slated to begin a rehab assignment with Triple-A Omaha on Tuesday. He’s been out since July 17 and has missed 30 games. “We’re in no hurry to rush him back. We need to make sure he’s good,” Yost said. … LHP Danny Duffy (right oblique strain) plans to continue his rehab stint Tuesday at Omaha. “He’s going to go four innings and limit his pitch count to around 15 per inning,” Yost said.

Orioles: C Chance Sisco was sore but available after being hit in the groin by a foul ball on Sunday in Boston. Earlier in the same inning, Sisco was struck on the left arm by a foul ball. … OF Dwight Smith Jr. (left calf strain) began a rehab assignment with Triple-A Norfolk as a DH and is poised to play the outfield on Tuesday.

Royals: RHP Brad Keller (7-13, 4.10 ERA) attempts to break a career-high, four-start losing streak in the second game of the series Tuesday night. In his last outing, Keller pitched six innings of no-hit ball before St. Louis tagged him in the seventh.