Now the pitching might be falling in line, too.

Rick Porcello held the Orioles to one run over six innings for his sixth win in eight starts and received plenty of support as Boston topped Baltimore 9-1 on Friday night.

Andrew Benintendi and Mitch Moreland sparked the offense with RBI triples to help out Porcello (11-9), who continued his newfound groove by matching a season-low with two hits allowed.

“It’s been four or five starts where I’ve felt like myself and felt pretty good throwing the ball,” Porcello said. “Our guys did a great job of swinging the bats and put up a bunch of runs, and it resulted in a big win for us.”

Boston’s bats have lived up to the championship billing this season, entering with baseball’s best average and the second-most runs scored in the majors.

It’s been the pitching that’s been most problematic, with Boston’s top three starters in Chris Sale, David Price, and Porcello combining for a 24-25 record.

With Sale and Porcello seemingly turning a corner and Price nearing a return from injury, the biggest question is whether or not the Red Sox have left themselves enough time to recover from a nearly year-long World Series hangover.

“If we do this for a month and a half, we’re playing in October,” said manager Alex Cora, whose team has won three straight and six of their last 10 to move to within 6 1/2 games of the second AL wild card.

Benintendi finished 3-for-4 with two RBIs, Mookie Betts hit a solo home run and Chris Owings drove in two for the Red Sox.

Trey Mancini drove in the only run for Baltimore in its fifth straight loss.

The Orioles have dropped nine of 10, with seven losses coming to the New York Yankees. Baltimore was coming off a four-game sweep that gave the Yankees 16 straight wins against the O’s and a decisive 17-2 season series victory.

“We’re just grinding,” Orioles starter Aaron Brooks said. “I think everyone is coming in every day with a clean slate and trying to do better than the day before, and frankly we haven’t been doing that well.”

Brooks (2-7) gave up five runs on eight hits in 5 1/3 innings. He has allowed 28 earned runs in 28 1/3 innings since Baltimore claimed him off waivers from Oakland on July 6.

“It’s been a tough year, but this is kind of a night where I can look back and say I got 6,000 outs in the big leagues, and (there are) not many people that can say they did that,” the 2016 AL Cy Young Award winner said.

Andrew Cashner’s solid start with Baltimore – he went 9-3 with a 3.83 ERA in 17 starts – earned him a midseason trade to contending Boston, but the former Orioles starter has since been demoted to the bullpen with a 1-4 record and 7.52 ERA for the Red Sox.

“Cash was wonderful for all of us here and (I) wish him the best after this series,” Baltimore manager Brandon Hyde said. “I’d like to see him do well.”

Orioles: RF DJ Stewart went 0-for-4 in his return after not playing since June 5 at Texas, where he suffered a concussion after taking a ball off the head on a missed catch. “He’s had obviously a tough couple months physically and just some bad breaks,” Hyde said. “We’re hoping he can stay healthy the rest of the year and get a lot of opportunity to play, prove what he can do.”

Red Sox: LHP David Price (left wrist cyst) played catch on flat ground before the game. Cora hopes Price will be able to throw off a mound in the coming week. Price went on the 10-day injured list last Thursday after receiving a shot of cortisone to treat the cyst. . 1B Steve Pearce (low back strain) has yet to resume running. He last played May 31 against the Yankees.

Orioles: RHP Asher Wojciechowski (2-5, 4.84 ERA) had a career-high 10 strikeouts while allowing one hit over 7 1/3 scoreless frames against Boston on July 21. 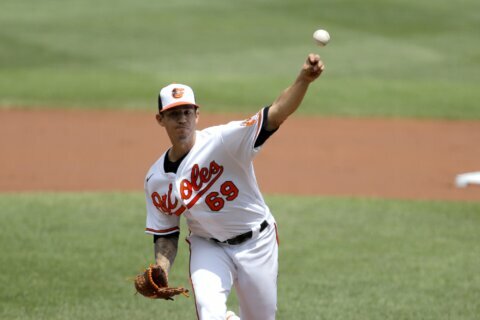 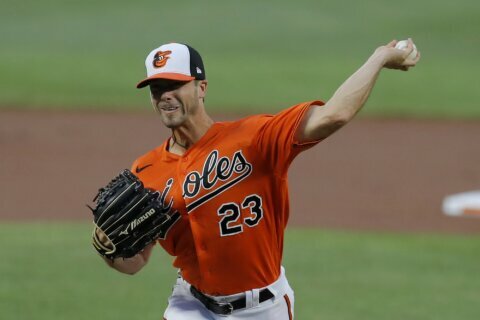