CANBERRA, Australia (AP) — A judge on Thursday discharged a jury in the high-profile trial of a former government advisor charged with raping a colleague in the Australian Parliament House because a juror had brought a research paper on sexual assaults into the jury room.

Australian Capital Territory Chief Justice Lucy McCallum said a juror had undertaken research in relation to the case and brought it into the room where a panel of 12 had been deciding their verdict.

“I have received evidence that at least one juror has had access to research material that was not provided to the jury during the trial,” McCallum said.

“It is beyond question the conduct of a juror is such to abort the trial,” she added.

A court official had discovered the research paper in the room late Wednesday. The jury was supposed to reach its verdict solely on the evidence presented during the 12-day trial.

Former ministerial advisor Bruce Lehrmann, 27, had pleaded not guilty in the Australian Capital Territory Supreme Court to a charge of sexual intercourse without consent in a minister’s office in March 2019 after a night of heavy drinking. He faced a potential 12-year prison sentence if convicted.

His alleged victim, then his 24-year-old junior colleague Brittany Higgins, reacted to the news of a mistrial with a searing attack on the justice system.

“Today’s outcome does not change that truth. But I did speak up, I never fully understood how asymmetrical (the) criminal justice system (is), but I do now,” she added.

She recounted how she was questioned for days in the witness box and forced to surrender her telephones, messages, photos and data to Lehrmann’s lawyers. Lehrmann exercised his right not to give evidence. His lawyers argued there had been no sexual contact.

“My life has been publicly scrutinized, open for the world to see. His was not,” Higgins added.

Lehrmann declined to speak to the media as he left the court. He has not been held in custody since he was charged and remains free on bail until Feb. 20 when a retrial could commence.

Prosecutors have yet to decide whether a retrial will go ahead.

The jury had been deliberating its verdict since the trial ended on Wednesday last week.

The jurors sent a message to the judge on Tuesday saying they could not reach a unanimous verdict, but she told them to continue deliberating.

Higgins has become a household name in Australia since she went to the media last year with her accusations that the former government had treated her rape allegation as a political problem and failed to adequately support her.

The case sparked nationwide protests as an example of a toxic work culture in Australian politics that is criticized as hostile toward women.

She quit her government job in January last year and then made a statement to police about the then-two-year-old incident.

Then-Prime Minister Scott Morrison responded in February last year by apologizing to Higgins in Parliament for the “terrible things” that she had endured in the building.

“The place that should have been a place of safety and contribution turned out to be a nightmare,” Morrison said.

McCallum revealed on Wednesday that defense lawyers had focused on this apology when they applied in March to have the prosecution postponed or discontinued on the grounds that Lehrmann could not receive a fair trial.

Morrison’s apology was “particularly egregious” and had elevated Higgins “to a status she should not have,” the lawyers argued, adding she “walks into court with an aura about her.”

McCallum rejected the application in March and on Wednesday published her reasons for that decision. 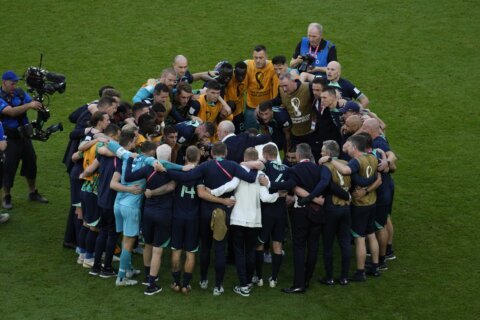