Top-ranked Australia was pushed to the brink by India, which was led superbly by captain Harmanpreet Kaur, before claiming seven wickets in the last five overs for victory.

There was drama midway through Australia’s innings when the team confirmed McGrath had tested positive for the coronavirus before the game.

Had the match been played in Australia, McGrath could not have played. But the Commonwealth Games rules for participation are more relaxed to match the regulations around coronovirus protocols in host nation England.

McGrath reported mild symptoms to team management before the final and returned a positive test but received clearance to play from the International Cricket Council and also the Commonwealth Games Foundation.

Australian team officials said medical staff “implemented a range of comprehensive protocols” during and after the match to minimize the risk of transmission.

That led to an unusual moment early in India’s innings as it chased Australia’s total of 161-8.

After taking an important catch in the third over, McGrath had to wave her teammates away from her as they were gathering to celebrate the moment. She had to isolate after the match as her teammates celebrated the victory.

With Harmanpreet at the crease, India appeared to have a strong chance of reaching Australia’s target.

But when she was out for 65, the momentum swung back to Australia and India was bowled out for 152.

Australian fast bowler Megan Schutt said the team knew about McGrath’s positive test and were all happy to play alongside her.

“She feels absolutely fine, so I think the positive result was an absolute shock to her,” Schutt said. “Probably the strangest part of all was not being able to celebrate with her.”

Australia became the first nation to reach 1,000 all-time gold medals at the Commonwealth Games — included 66 golds so in Birmingham — when the top-ranked Diamonds defeated Jamaica 55-51 in a tough netball final, avenging a loss in the group stage.

With one day of competition remaining, Australia had a decisive lead in the medal standings over second place England, which had 55 golds and 166 medals overall.

Also Sunday, and only a week after the England women’s soccer team won the European Championship, its women’s field hockey team won a Commonwealth Games title for the first time.

It was a case of seventh time lucky for England, which beat four-time champion Australia 2-1 in the final.

In the six previous editions where women’s hockey has been played in the Games, England had claimed either silver or bronze medals.

The crowd was already singing “Hockey’s coming home,” changing a popular chant usually associated with soccer, when Australia scored its only goal with 19 seconds remaining.

The 31-year-old Gate also won the individual and team pursuits, as well as the points race, and he is the first New Zealand cyclist to claim four gold medals in a Games.

“That’s a special thing, making history,” he said. “It gives a challenge to other Kiwis to go for that record in years to come.”

Australia’s double world champion javelin thrower Kelsey-Lee Barber again played the waiting game to perfection. After adding the 2022 world championship title in Oregon last month to her success in Doha in 2019, Barber was a hot favorite to claim her first Commonwealth gold medal.

But on the eve of the opening ceremony on July 28, she tested positive for COVID-19, putting her into isolation and casting doubt over her participation. She received clearance to compete on Thursday.

“Mentally, I coped,” she said. “I wasn’t going to let it affect my performance today.”

She saved her best throw for last.

Trailing her teammate Mackenzie Little, who threw a personal best of 64.27 meters, Barber responded with an effort of 64.43 meters to clinch the gold medal on her sixth and last attempt.

England won gold when the 4×100-meter men’s relay team sprinted to success over Trinidad and Tobago and Nigeria.

Zharnel Hughes backed up from his second in the 200-meters final on Saturday night to run a strong second leg when seizing the advantage for England, which clocked 38.35 seconds.

Nigeria claimed the women’s 4×100 relay gold medal, with Jamaican champion Elaine Thompson-Herah finishing strongly as the anchor to clinch bronze for her nation.

Pakistan’s Arshad Nadeem threw a meet record 90.18 meters to win the javelin gold medal, relegating two-time world champion Anderson Peters of Grenada to silver with a mark of 88.64 and Kenya’s Julius Yego into bronze. Olympic champion Neeraj Chopra of India missed the competition because of an injury sustained while earning a silver at the world championships last month.

Wins in the women’s 4×400 relay, after England was disqualified for a lane infringement, and in the women’s beach volleyball final helped lift Canada to 26 gold medals and 91 overall in third place in the standings after 11 days of competition. The Canadians were seven gold medals ahead of New Zealand and eight clear of fifth-place India. 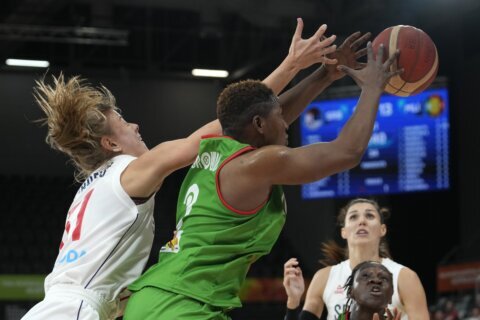