The 108 confirmed deaths and 2,742 new coronavirus cases were reported Saturday. Hospitalizations dropped below 2,000 for the first time in nearly three weeks, with 1,981 COVID-19 patients occupying hospital beds on Friday.

Phoenix officials say the city’s two mobile COVID-19 vans and other city testing locations will begin offering vaccines. The city will use federal pandemic relief money to pay for adding vaccinations to the testing program.

Arizona has reported a total of 1.06 million confirmed cases and 19,487 confirmed deaths since the start of the pandemic.

ROME — Italy is reporting up to a 40% increase in the number of people getting a first dose of the COVID-19 vaccine following a government decree requiring a health pass for all workers, public and private, starting Oct. 15.

The office of Italy’s coronavirus czar says there’s been a 35% one-week rise in first doses compared to last Saturday. Italian regions nationwide reported upticks of 20% to 40% for appointments this week to get the shot.

On Thursday, Italy became the first major European economy to require all workers to present a “Green Pass” to work next month. It requires proof of vaccination, a recent negative test, or contracting the virus in the past six months.

Health Minister Roberto Speranza says the requirement is aimed at boosting the vaccine campaign while creating safer workplaces. Italy, once the epicenter of the outbreak in Europe, has fully inoculated 75% of its population ages 12 and older. Italy has reported more than 130,000 confirmed deaths, the third-highest toll in Europe after Britain and Russia.

ORLANDO, Fla. — Florida reported 11,275 new daily cases on Friday, about half the number from last month.

Florida was averaging more than 21,000 cases a day in August.

Epidemiologists say the state’s rates of vaccination has outpaced the national average, but it hasn’t been enough to keep the highly contagious delta variant at bay because of the Florida’s large elderly population and low vaccination rates among younger groups.

AdventHealth’s Central Florida Division says the number of COVID-19 patients at its hospitals stands at 850 people, several hundred patients fewer than this summer.

A statement issued Friday says Newsom, his wife and two other children have since tested negative for the virus.

All four of the governor’s children are under 12, the age when children can be vaccinated.

“The Newsoms continue to support masking for unvaccinated individuals indoors to stop the spread and advocate for vaccinations as the most effective way to end this pandemic,” said a statement from Erin Mellon, spokesperson in the governor’s office.

The announcement comes only days after Newsom handily defeated an effort to recall him, partly driven by the impact of the pandemic.

UNITED NATIONS — The U.N. General Assembly is relying on a vaccine honor system for world leaders before they speak at next week’s meeting.

Presidents, premiers, monarchs and other dignitaries won’t have to show vaccination cards or other proof of inoculation. Assembly President Abdulla Shahid says they’ll simply attest to being vaccinated by swiping their ID badges.

The U.N. has been wrestling with how to implement a New York City vaccination requirement for convention centers. Russia has criticized the policy, and the first scheduled speaker, Brazilian President Jair Bolsonaro, says he doesn’t plan to get vaccinated anytime soon. He contracted the coronavirus in July 2020.

Shahid told members earlier this week he supported the New York City policy but didn’t give details on how it would work. Shahid, a 59-year-old Maldivian, was elected president of the U.N. General Assembly in June.

Next week, more than 100 heads of state and government and over 20 foreign ministers have signed up to speak in person. Other nations are participating by video for the speeches, where leaders discuss global issues, spotlight domestic ones and use the world stage to court allies or assail foes. The coronavirus pandemic forced the assembly’s top-level annual meeting to go mostly virtual last year.

ATLANTA — A disaster relief organization founded by actor Sean Penn is helping Georgia’s drive to vaccinate people against the coronavirus.

CORE, or Community Organized Relief Effort, has offered vaccines at hundreds of pop-up clinics around the state, including schools, farmers’ markets and meat plants.

Only 46% of the state is fully vaccinated, well below the national average of 54%. It’s a big factor in Georgia’s nearly three-month surge in COVID infections and hospitalizations.

CORE offers vaccines for free. Funding for community outreach comes from a foundation backed by the billionaire owner of the Atlanta Falcons, Arthur Blank, and the Community Foundation for Greater Atlanta. The group plans to spend more time offering vaccines to employees at work sites, where turnout is better, said Margaret Herro, CORE’s Georgia director.

Since ending South Carolina’s state of emergency on June 7, Republican Gov. Henry McMaster has maintained that parents alone should decide if children wear masks in schools, even as the state’s new cases soared from 150 a day on average to more than 5,000.

Now teachers, students and parents are struggling with the fallout as more young people contract the delta variant, forcing nearly two dozen schools and two entire districts back to online learning within a month of returning in person.

State health and education officials say the statewide mask ban in schools took away one of their best tools to stop the spread of COVID-19. The state hit nearly 2,600 COVID-19 patients hospitalized in early September, a record.

“We spiked the football too early. Instead of continuing to listen to medical professionals and interpreting the data, he has been guided by Republican Governors Association talking points,” Democratic state Sen. Marlon Kimpson of Charleston said.

Some lawmakers from both parties are pushing for a special session to repeal the rule and allow local governments to make decisions. The state Supreme Court is considering a lawsuit over whether the mask provision is legal.

DUBAI — The capital of the United Arab Emirates has ended a policy requiring those coming in from other emirates to have a recent negative coronavirus test.

Abu Dhabi made the announcement Saturday, saying that people from the UAE’s six other emirates could enter the capital from Sunday without getting a test.

For months, oil-rich Abu Dhabi had restricted travel, even as neighboring Dubai rapidly opened itself up to tourists.

Abu Dhabi also has implemented a requirement that people prove their vaccination status to enter some public places — a stricter requirement than the country’s other emirates.

Health Minister Mansukh Mandaviya called the feat “ a golden chapter … written in the history of the country and the world.”

Only China has administered more. The Chinese government said this week it had given more than 2.16 billion shots and that 1 billion Chinese people were fully vaccinated.

India, a country of nearly 1.4 billion people, has given at least one dose to more than 62% of eligible adults and two doses to about 21%. Health ministry officials say they plan to administer over a billion shots by mid-October.

India has reported more than 33 million coronavirus cases and 444,529 deaths. The country is recording over 30,000 new COVID-19 cases a day.

About 1,000 demonstrators gathered in the suburb of Richmond after the location of the protest was changed at the last minute to evade authorities.

There were minor scuffles as well as a violent confrontation involving a handful of protesters. Several protesters were arrested.

Most of the demonstrators defied regulations by failing to wear masks.

Some 2,000 police officers were deployed at road checkpoints and barricades, and on roving patrols, to try to stop the rally going ahead in breach of public health orders.

Melbourne’s sixth lockdown began on Aug. 5. Melbourne is the capital of Victoria state, which on Saturday reported 535 new infections and one COVID-19 death in the latest 24-hour period.

JOINT BASE ELMENDORF-RICHARDSON, Alaska — Military leaders on Joint Base Elmendorf-Richardson have declared a public health emergency in response to increasing COVID-19 cases in Alaska.

They also encouraged all personnel to avoid places that do not require masks or social distancing, officials said.

U.S. Air Force Col. Kirsten Aguilar said Friday that the declaration will remain in effect for 30 days, but could be shortened or extended based on cases and community transmission of COVID-19.

Hospitalizations and COVID-19 cases across the state have increased as a result of the highly contagious delta variant. Alaska on Friday reported more than 1,200 newly confirmed cases per 100,000 people over the past two weeks.

The U.S. territory’s acting governor and health officials said the islands’ first case of COVID-19 was of a resident who returned to American Samoa from Hawaii this week.

The infected traveler flew in on Monday, the first day of newly resumed commercial flights from Honolulu to Pago Pago. The route had been suspended since March 2020.

Officials say the resident was fully vaccinated and had traveled to Hawaii and the U.S. mainland. They say the traveler tested negative for COVID-19 before boarding the flight back to American Samoa.

American Samoa requires all travelers to be vaccinated and to quarantine.

BATON ROUGE, La. — A child is among the latest to die from COVID-19 in Louisiana, state health officials said Friday.

Heath department figures showed the state death toll from the illness grew by 52. One of the victims was a child between the ages of 5 and 11. Fifteen people younger than 18 have died in Louisiana since the pandemic began. And it’s the sixth pediatric death since a fourth surge began this summer.

Coronavirus hospitalizations continued to drop. They fell to 1,367 in Friday’s figures, 64 fewer than the previous day. Hospitalizations are down from a peak of more than 3,000 in August but still well above the pre-surge levels of mid-summer.

WASHINGTON — The White House says President Joe Biden will host a virtual summit next week aimed at “calling the world to account” on defeating the COVID-19 pandemic.

The meeting, to take place on the margins of the United Nations General Assembly, is meant to encourage more countries to do more to vaccinate the world against COVID-19 and improve coronavirus treatments.

Press secretary Jen Psaki says Biden “will be asking participants to commit to of a higher level of ambition” on global vaccinations and therapeutics, along with preparing for the next pandemic.

The U.S. has committed to donating the more COVID-19 vaccine doses than any other nation to the rest of the world, and Biden is expected to ask other well-off nations to make bolder vaccine sharing commitments.

WASHINGTON — After overwhelmingly rejecting a plan to give Pfizer booster shots against COVID-19 to most Americans, an influential federal advisory panel has approved the extra shots for those who are 65 or older or run a high risk of severe disease.

The decision was made by a committee of outside experts who advise the Food and Drug Administration.

The vote recommending the booster shots for older Americans and other high-risk groups helps salvage part of the White House’s plan but is still is less than the sweeping plan proposed by Biden administration to offer booster shots of the Pfizer and Moderna vaccines to nearly all Americans eight months after they get their second dose.

Members of the panel questioned the value of offering boosters to nearly everyone. The World Health Organization has encouraged wealthier nations to hold off on boosters, except for the most vulnerable people, until other countries have received their first shots. 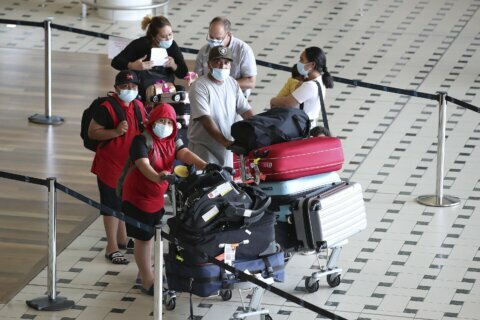