WELLINGTON, New Zealand (AP) — South Africa offered on Friday to host all remaining games in the southern hemisphere’s Rugby Championship after a community COVID-19 outbreak prompted a new lockdown in New Zealand and forced that country to cancel two home tests against the Springboks and put a trip by its team to Australia on hold.

The announcement by New Zealand Rugby left tournament organizer SANZAAR scrambling for alternative options with only one of six rounds of Rugby Championship matches completed so far.

In a statement, NZR said it had received government advice that the world champion Springboks will not be admitted to New Zealand for matches in Dunedin on Sept. 25 and Auckland on Oct. 1. The Dunedin match was to be the 100th test between New Zealand and South Africa.

Matches between the New Zealand women’s team and Australia also have been canceled.

NZR chief executive Mark Robinson said every effort had been made to keep the Springboks tests in New Zealand.

“We share the disappointment of our fans, players and other stakeholders, particularly those in Dunedin where the sold-out 100th test between the All Blacks and South Africa was shaping up as a very special occasion,” Robinson said. “However, after discussions with government, it is clear that the COVID-19 travel restrictions meant there was no way of bringing the South African and Wallaroos squads into New Zealand.”

SA Rugby CEO Jurie Roux said South Africa was “well-versed” in holding rugby tests “within the prevailing COVID restrictions” after hosting the British and Irish Lions for a three-test series, which ended earlier this month.

However, that Lions tour was marked by numerous virus outbreaks in the South African squad and changes to the match schedule because of the virus. South Africa is still in the midst of a winter wave of coronavirus cases and is regularly recording more than 10,000 new infections daily.

Argentina, the fourth country in the southern hemisphere tournament, is currently in South Africa and will play a second game against the Springboks on Saturday in the second round of Rugby Championship games. That match was unaffected by the issues in New Zealand, SANZAAR said.

In another option for the remaining matches, reports from Britain suggested they might be moved to Europe, where they could be played with crowds in attendance. SANZAAR would make an announcement on the dates and venues for the remaining games “when appropriate,” it said.

The All Blacks were due to leave for Perth on Sunday for a test against Australia on Aug. 28 but Robinson said their departure has been delayed.

“Without complete certainty on the team’s next movements around the Rugby Championship we felt it was prudent for the team to stay put in New Zealand,” he said.

The Perth test already was in doubt because the West Australian state government had paused quarantine-free travel from New Zealand, meaning the All Blacks likely would have to isolate for 14 days on arrival.

Rugby Australia said in a statement it was continuing to work with SANZAAR in an attempt to keep the Rugby Championship alive this season after similar turmoil last year, when South Africa withdrew from the tournament completely because of the pandemic.

But Wallabies coach Dave Rennie said he was angry at how the New Zealanders announced the decision.

“It’s disappointing how it’s been communicated,” Rennie said. “Our boys all found out through social media. NZ Rugby didn’t even have the respect to consult RA about their decision, so that’s hugely disappointing.”

Rugby Australia chief executive Andy Marinos said the announcement was made despite ongoing discussions with Robinson.

“It’s incredibly disappointing to be informed of this decision via the media, despite having a conversation with the CEO moments before and there (was) no mention that this was the intention,” Marinos said in a statement.

South Africa joined in the criticism of New Zealand Rugby, saying it had acted “unilaterally” without informing its “SANZAAR partners.”

The discovery of community cases of COVID-19 in Auckland last week caused the government to place all of New Zealand at Alert Level 4, the strictest lockdown, which prohibits sports events or any public gatherings. So far 31 community cases have been detected, including three in Wellington that were announced Friday.

France lobbies EU as trust in US, UK and Australia wanes 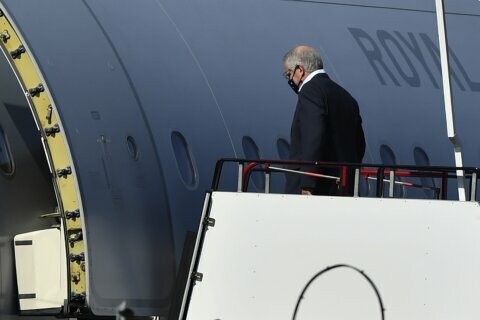