SYDNEY (AP) — Ben Simmons has withdrawn from Australia’s Olympic squad in order to spend time working on his individual skill development following a disappointing NBA post-season for the Philadelphia 76ers.

Basketball Australia issued a statement early Tuesday local time to confirm Simmons’ decision to pull out of selection for the Tokyo Olympics.

“It is a pretty rough time for him right now,” Australia’s head coach Brian Goorjian said. Going to the Olympics “is something that he wanted to do, but the timing just hasn’t worked.

“The best thing for everybody right now is for him to go on and develop that skill package and improve in a couple of areas for his next season in the NBA.”

“The Boomers are always here for him,” he said. “We wanted him to know that in his time of need, the culture and the guys here are behind him and support him.”

The 24-year-old Simmons shot 25 for 73 (34%) from the free-throw line in the NBA playoffs and missed 27 alone against the Atlanta Hawks.

He pinned his playoff failures on a mental block more than shot mechanics.

The three-time All-Star is a 5 for 34 career 3-point shooter over four NBA seasons and shot at least 60% from the foul line each of the last three regular seasons.

Philadelphia 76ers Team President Daryl Morey refused to commit to bringing Simmons back next season, saying only that he was always open to a deal that could improve the team.

Morey last week said he thought Simmons could benefit from playing in the Olympics.

“I think it could, frankly, enhance” his game, Morey said. “There’s skill work, but then playing games is helpful.”

Amid a barrage of criticism following Philly’s early exit, Simmons said he needed to “clear my mind and get my mental (health) right.”

The Boomers squad is in Los Angeles preparing for exhibition games against the U.S., Nigeria and Argentina in Las Vegas before heading to Japan for the Olympics, which open July 23.

NBA veteran Patty Mills said Simmons would be welcome back in the Boomers squad whenever he was ready.

“This place right here, and the program we have developed, and how strong our culture is, this is one place for him that is always going to be here with open arms because we are mates,” Mills said. “We are teammates, we are a brotherhood and to be able to represent the green and gold, that is the culture that we have.” 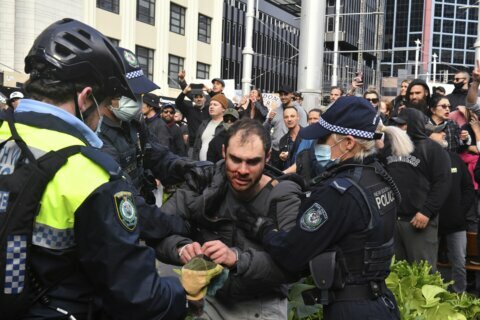