Pablo Matera was stripped of the Argentina captaincy and suspended with two teammates on Tuesday for historical social media posts deemed to be “discriminatory and xenophobic.”

The sanctions were announced a day after backlash in Argentina for the low-key way the team responded to the death last week of soccer great Diego Maradona.

Matera became a national hero when he led the Pumas to their first win over New Zealand in November in the ongoing Tri Nations series in Australia. Now he, veteran lock Guido Petti and hooker Santiago Socino will miss their final Tri Nations match against Australia on Saturday in Sydney.

The UAR said it “repudiates the discriminatory and xenophobic comments published by members of the Los Pumas team on social networks” from 2011 to 2013.

The statement added the social media posts didn’t reflect the personalities of the trio while they have been playing for the Pumas, but “the Argentine Rugby Union condemns all kinds of hate speech and consider unacceptable that those who conveyed them represent our country.”

The posts, mostly tweets, reportedly were aimed at Black people and Bolivian and Paraguayan domestic workers.

“Today I have to take (responsibility) for what I said nine years ago,” Matera said. “I am very ashamed. Apologies to all those who were offended by the atrocities I wrote. At that moment I did not imagine who I was going to become.

“I’m also sorry to my team and my family for the moment they are going through … and thanks to the people who love me for their support.”

Socino added in a statement: “I want to apologize to those who I may have offended with what I said at the time, and what I absolutely repudiate. I never realized what it could cause, and I do not seek to justify it with the immaturity with which I handled myself.”

The Pumas have gone from stars to villains at home within weeks.

The players wore black armbands in the Tri Nations test against the All Blacks, the only gesture they made after Maradona’s death last Wednesday.

That tribute contrasted poorly with that of the New Zealanders, who offered an All Blacks jersey with Maradona’s name and playing number 10 to the Argentina squad on the halfway line before their match last weekend.

The backlash forced the Argentine squad to make a public apology on Monday, before the controversial old social media posts emerged.

Matera admitted “the tribute we chose to pay Diego caused pain and disappointment in many people and we wanted to (say) that in no way was that our intention.”

“Diego was an extremely important person for us, he always supported us,” Matera said, adding that “for Argentine athletes, Diego Maradona is the greatest thing there is and he marked us all.” 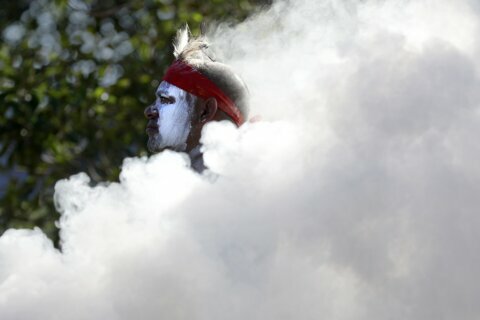