SYDNEY (AP) — New Zealand inflicted on Australia a record 43-5 beating to retain the Bledisloe Cup in the Tri Nations opener on Saturday.

The margin was a record as the All Blacks earned an unassailable 2-0 lead in the four-match series and kept the cup for an 18th successive year.

The All Blacks scored six tries to one, two of them by flyhalf and man-of-the-match Richie Mo’unga who tallied 23 points.

“Probably one of the best managed games I’ve seen him play for us in a while,” New Zealand coach Ian Foster said.

Wallabies counterpart Dave Rennie handed test debuts to flyhalf Noah Lolesio and inside center Irae Simone, marking the first time in 73 years they started rookies at those positions against the All Blacks.

But the move didn’t go well, with Mo’unga overwhelming Lolesio as the All Blacks had the match and cup in hand leading 26-0 at halftime in the rain.

“We’re hurting a lot from that,” Wallabies captain Michael Hooper said. “It’s a hit to the confidence.

“They were very clinical. They played the conditions really well, jumped on a lot of loose ball. I just don’t think we were accurate. So, again, giving away possession too easily and then we didn’t kick smart.”

It didn’t help when right wing Filipo Daugunu was yellow-carded in the third minute for tackling airborne opposite Caleb Clarke. Within two minutes, the missing defender was exploited when All Blacks prop Karl Tu’inukuafe slid over the tryline.

All Blacks winger Jordie Barrett was then sin-binned for elbowing Dane Haylett-Petty, and New Zealand bombed two tries when Dane Coles knocked on in goal, and Clarke was prevented from touching down by the sliding knees of Marika Koroibete.

But New Zealand was relentless, as Mo’unga scored after switching inside and beating hooker Brandon Paenga-Amosa, then Nic White and Lolesio for pace.

Six minutes later, Mo’unga was in again when he collected a çhip kick from Beauden Barrett, who had slotted in at flyhalf.

Coles was carried over by his dominant pack for New Zealand to lead 26-0 at the break.

Australia scored quickly from the restart, Jordan Petaia surging and White putting Lolesio into space for the try.

The All Blacks were kept quiet for 20 more minutes until a Mo’unga penalty kick. In the last 10 minutes they added tries from skilful passing to Rieko Ioane and Jordie Barrett to help eclipse their previous biggest winning margin of 43-6 on another wet day in 1996 in Wellington.

“For us to play that well over here is something we’re pretty proud of,” Foster said. ”You saw the feeling from our guys on the field afterwards just how much the Bledisloe means to us.”

The teams meet again next Saturday in Brisbane in the second match of the Tri Nations, which also features Argentina. 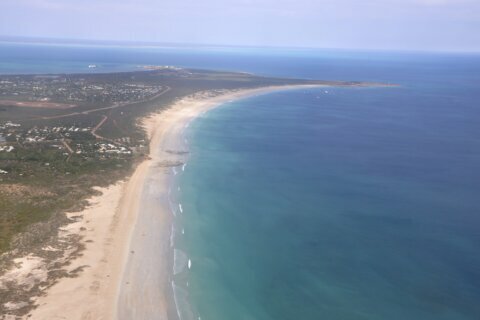 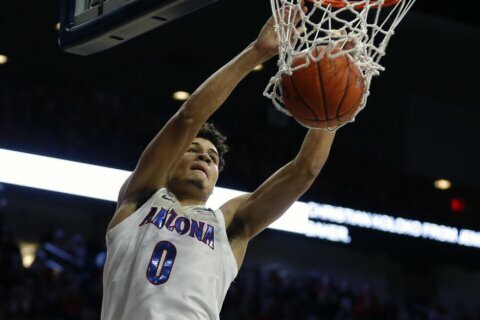