LOS ANGELES (AP) — Adam Scott has another victory at Riviera, and this time it counts.

Scott survived a calamitous Sunday with just enough clutch putts — for birdie, par, even a bogey — and closed with 1-under 70 for a two-shot victory in the Genesis Invitational.

The victory comes 15 years after Scott won a playoff at Riviera that didn’t count as official because rain shortened the tournament to 36 holes. He earned every bit of this victory, his 14th on the PGA Tour and 29th worldwide.

Scott made double bogey and Rory McIlroy made triple bogey on the fifth hole to fall out of the lead. Scott recovered with a birdie on the next hole to regain a share of the lead, and he never trailed again. McIlroy shot 73 and tied for fifth.

Tiger Woods was 4 under through eight holes of the tournament and in a downward spiral the rest of the week. He shot 77 in the final round and finished last among the 68 players who made the cut. It was the first time Woods had finished last on the PGA Tour since the Memorial in 2015.

With the victory, Scott goes back to among the top 10 in the world.

ADELAIDE, Australia (AP) — Inbee Park captured her 20th career LPGA Tour victory on Sunday by closing with a 1-over 74 for a three-shot victory in the Women’s Australian Open.

Park led by as many seven shots on the back nine at Royal Adelaide Golf Club before dropping shots at the 14th and 16th holes as Amy Olsen made a late charge. Olsen shot 70.

Park birdied the par-5 17th to restore a three-shot lead and closed with a par to finish on 14-under 278. It was her first victory in nearly two years and pushed her in the right direction as the seven-time major champion seeks a coveted spot for South Korea in the Olympics at Rio.

Park won the gold medal in Rio four years ago.

NAPLES, Fla. (AP) — Scott Parel overcame a three-shot deficit Sunday and closed with an 8-under 63 to win the Chubb Classic by two shots over Bob Estes, his third career victory on the PGA Tour Champions to surpass $5 million for his career.

Parel moved atop the Charles Schwab Cup standings for the first time in his career.

Parel seized control around the turn on The Classic at Lely Resort with a birdie on No. 1. Behind him, Langer dropped shots on the eighth and nine holes, giving Parel a two-shot lead. No one caught him the rest of the way.

He finished at 17-under 196, tying a tournament record.

Parel has rallied on the final day in all three of his PGA Tour Champions victories. His bogey-free 64 extended his streak of 21 straight rounds under par dating to the second round of the SAS Championship last year. That’s the longest active streak on the tour.

LONGWOOD RANCH, Fla. (AP) — Andrew Novak birdied his last two holes for a 6-under 66 and a one-shot victory over John Chin in the Lecom Suncoast Classic.

Novak won for the first time in his third season on the Korn Ferry Tour and moved to No. 3 in the points list.

Chin, who closed with a 64, began the back nine at Longwood National with three straight birdies, and picked up two more through the 16th hole. But he had to settle for par on the final two holes and a runner-up finish.

Taylor Montgomery was 7 under in a nine-hole stretch through the 17th hole, only to make bogey on the final hole for a 64 to finish two shots behind.

Peter Uihlein, the former U.S. Amateur champion who had a one-shot lead going into the final round, had six bogeys in his round of 74 and tied for 20th.

GEORGE, South Africa (AP) — Christiaan Bezuidenhout finished off his big week at the Dimension Data Pro-Am by closing with a 5-under 67, making an eagle on the final hole at Fancourt for a one-shot victory over George Coetzee.

Bezuidenhout, who lost in a playoff at the Dubai Desert Classic three weeks ago, cracked the top 50 in the world for the first time in his career with the victory. He already is in the World Golf Championship next week in Mexico City, and this might be enough for him to qualify for the Match Play.

The top 50 in the world after the Match Play are invited to the Masters.

Coetzee had to settle for a par on the 18th and finished one shot behind. Bezuidenhout won for the third time in his career, and second time on the Sunshine Tour.

Michael Sim close with an even-par 70 and beat Scott Arnold in a playoff to win the Coca-Cola Queensland PGA Championship on the PGA Tour of Australasia. Sim, who 10 years ago was among the top 50 in the world, won for the first time since 2017. 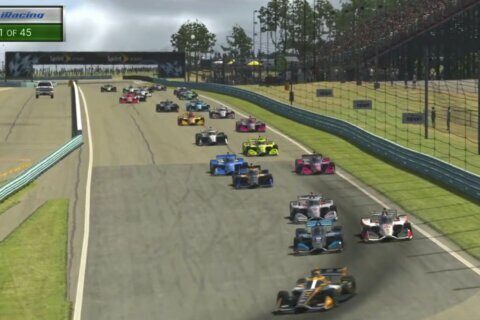