The air was considered hazardous for outdoor workers, and described as among the worst in the world. For professional tennis…

The air was considered hazardous for outdoor workers, and described as among the worst in the world. For professional tennis players, though, it was deemed to be OK for business.

A thick haze enveloped Melbourne as smoke from devastating wildfires drifted over Australia’s southeast. Fine particles in the air early Tuesday hit the worst of six levels on a scale from good to hazardous, before dropping into the second-worst category, “very poor.”

While public health warnings were regularly being broadcast, some players preparing for the Australian Open were outdoors trying to qualify for the first Grand Slam event of the decade.

There’s long been policies in place for tournament organizers to mitigate for the brutal heat that can be a factor in the Australian summer, and for rain. But problems with air quality are new, and Australian Open organizers are scrambling to deal with it amid the bush fire crisis.

“This is a new experience for all of us in how we manage air quality, so we have to listen to the experts,” Australian Open tournament director Craig Tiley said.

Victoria state’s Chief Health Officer, Brett Sutton, said “overnight for Melbourne it did reach the worst in the world.”

The noxious haze triggered false alarms from hundreds of smoke detectors. Conditions improved as the temperature increased. Predictions are for air quality to remain poor until Wednesday night.

Monitoring equipment has been installed at various locations within Melbourne Park, and Australian Open organizers have devised an air quality policy for players. They’ll consult with medical experts, the weather bureau and scientists from the Environment Protection Authority about whether it’s unsafe to play, Tiley said. Matches would be stopped if conditions became unsafe on medical advice.

“Absolutely. It’s very serious at the moment in Melbourne,” Guo told the Associated Press in a telephone interview. “A low level of air pollution is a real hazard for human health … so, such high levels in Melbourne is very serious for personal health.

“In general, Melbourne has very good air quality,” Guo added, but at “this stage, air pollution is very serious — terrible.”

Players have previously raised concerns about the health impacts of playing tournaments in parts of China, India and other venues where air quality is at hazardous levels.

“I think the air pollution here because of the bush fires is much worse than Beijing, Mumbai or Delhi,” Guo said.

Novak Djokovic, who has won a record seven Australian Open men’s titles, expressed concerns about the conditions in Melbourne while he was playing at the ATP Cup further north in Brisbane and Sydney last week His Serbia team won the ATP Cup, beating Rafael Nadal’s Spain in the final. Both top-ranked players are part of the men’s player council, which will meet this week to discuss air quality issues.

The Australian Open starts on Monday, and play in the qualifying tournament can potentially continue until Sunday. There are contingencies for all extremes.

But players have already been affected. At the Kooyong Classic exhibition event, former No. 1 Maria Sharapova struggled in the heat and smoke before her match against Laura Siegemund was called off in the second set.

In Australian Open qualifiers, Dalila Jakupovic was leading against Stefanie Voegele when she dropped to her knees with a coughing spell. She had breathing difficulties and had to retire from the match.

“I was really scared that I would collapse,” Jakupovic told Australian Associated Press. “I never had breathing problems. I actually like heat. But … I just couldn’t breathe anymore and I just fell on the floor.”

Jakupovic said it was “not fair” she’d been asked to play.

Other players, including Alize Cornet, took to social media to say it was a bad idea to be playing.

Eugenie Bouchard, the 2014 Wimbledon finalist, needed medical assistance during her first qualifying match before beating You Xiaodi in almost three hours. Bernard Tomic was rubbing his eyes before his match and needed a medical timeout for breathing issues before losing to Denis Kudla.

Guo advises people to stay indoors, and use air-conditioning and purifiers if accessible. When going outdoors, he recommends people wear appropriate masks.

Melbourne has three stadium courts with retractable roofs and air-conditioning. There are eight indoor courts at the National Tennis Centre, adjacent to the Melbourne Park site.

Those could be used for the Australian Open in extreme circumstances, and are already heavily booked for practice. Organizers are concerned, but not in a panic about the impact of the air quality on the tournament.

Fires have raged in large parts of Australia, but the metropolitan areas of Sydney and Melbourne have been relatively fire free. The air quality problem is caused by the wind, which has even spread the smoke across the Tasman Sea to New Zealand.

Sports events have been postponed or moved — including an Australian Open tuneup event in Canberra that had to be moved from the capital last week because of air quality issues.

Guo said sports organizers Down Under should be considering long-term strategies for dealing with it.

“Maybe they need to make a plan for the future — Plan B or Plan C,” he said. “Some studies have already been done that show because of climate change, the bush fires will be more and more frequent, last longer and (be) more intense. So the bush fire air pollution will be a very serious problem.”

At least 27 people are dead, including four firefighters, from the fires in four states which have destroyed more than 2,000 homes, killed millions of animals, and scorched an area larger than the U.S. state of Indiana since September. Tennis stars including Serena Williams and other athletes and celebrities have contributed to the fundraising effort for victims of the fires and the volunteers fighting the blazes.

From Monday, there’ll be 128 players in each of the men’s and women’s singles draws, plus others in doubles, juniors and wheelchair events. And a small army of volunteers, ballkids, umpires and line judges, and catering staff.

Then, of course, there’s the fans. The 2019 Australian Open hit a record 796,435 for attendance, including more than a half-million in the first week. So there’s more than a match schedule to consider. 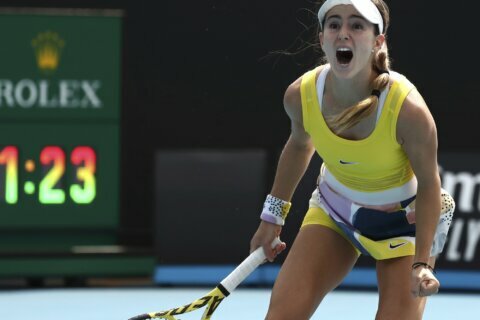 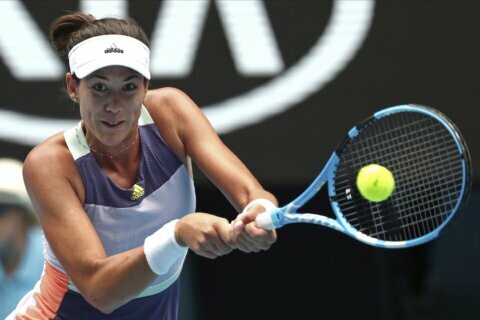 Kyrgios barks, mocks his way to Australian Open’s 3rd round 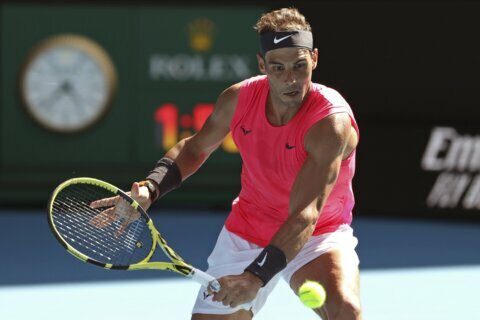 The Latest: Ballkid is OK, Rafa into 3rd round in Australia