Rafael Nadal plays his first-round match against Hugo Dellien and if he needed any reminder of his advancing age, the 33-year-old Spaniard was asked if he had any secret to be able to have the top ranking in three decades — including the oldest man to finish a year No. 1. “No secret at all,” he said, smiling.” He then became more serious, adding: “Well, I can’t say I have been lucky with injuries, because I have not. There is only about passion, about love for the game, and about being able to stay positive in the tough moments.” Chances are Nadal won’t have too many tough moments with Dellien, whose highest ranking has been 74 and who has never gone past the second round in four previous Grand Slam tournaments. He’s never played at Melbourne Park. Nick Kyrgios is aiming to improve on his 11-6 record in his home major when he plays Lorenzo Sonego. The last Australian man to win the national championship was Mark Edmondson in 1976. Kyrgios hasn’t reached the quarterfinals of a major in five years. He’s under probation for outspoken comments and his on-court behavior. He helped lead fund-raising efforts for the wild fires that have devastated parts of Australia in the past month, and says he’s been humbled by the response and saddened by the destruction. Stay tuned for match day. In women’s play, second-seeded Karolina Pliskova plays Kristina Mladenovic and No. 4 Simona Halep plays Jennifer Brady. Amanda Anisimova has a tough opener against Zarina Diyas.

Heavy rain in the afternoon suspended play on outside courts, although matches continued on the three covered arenas. More than two dozen matches were postponed to Tuesday.

STAT OF THE DAY: 21: record number of times Federer has won his first-round match at the Australian Open, in 21 attempts.

QUOTE OF THE DAY: “Margaret Court was a wonderful, great champion. And now how great is Serena Williams?”: 23-time major winner Williams on her pursuit of Court’s all-time record 24 Grand Slam singles titles. 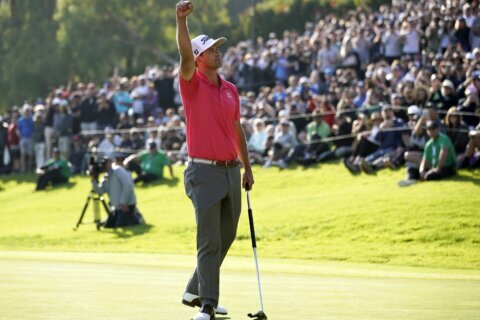