Hundreds of thousands of protesters in Australia, many of them children who skipped school, kicked off a day of demonstrations around the world against climate change in the run-up to a U.N. summit in New York.
Listen now to WTOP News WTOP.com | Alexa | Google Home | WTOP App | 103.5 FM
(1/12) 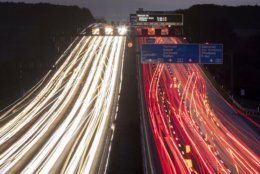 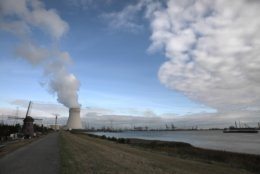 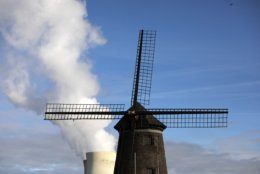 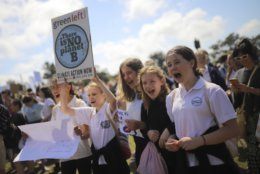 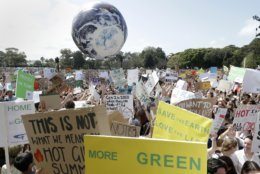 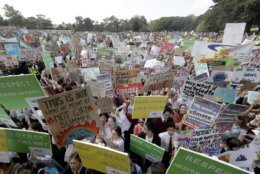 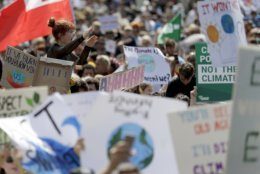 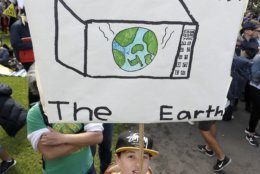 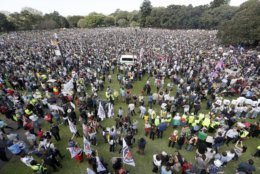 NEW YORK (AP) — Young people afraid for their futures protested around the globe Friday to implore leaders to tackle climate change, turning out by the hundreds of thousands to insist that the warming world can’t wait any longer.

Marches, rallies and demonstrations were held from Canberra to Kabul and Cape Town to New York. More than 100,000 turned out in Berlin.

Days before a U.N. climate summit of world leaders, the “Global Climate Strike” events were as small as two dozen activists in Seoul using LED flashlights to send Morse code messages and as large as mass demonstrations in Australia that organizers estimated were the country’s largest since the Iraq War began in 2003.

“You are leading the way in the urgent race against the climate crisis,” U.N. Secretary General António Guterres wrote in a message to the young protesters on Twitter. “You are on the right side of history. Keep pushing us to do the right thing.”

“Basically, our earth is dying, and if we don’t do something about it, we die,” Conermann said.

Thousands packed the streets around Seattle’s City Hall, following a march where tech workers from Amazon and Google joined students demanding an end to fossil fuel use.

Demonstrations came in smaller cities as well. Washington Gov. Jay Inslee, who recently abandoned his climate-focused presidential run, addressed a rally in Spokane, and a crowd chanted inside the rotunda of the state Capitol in Madison, Wisconsin.

“It’s really unbelievable and really startling to know how little time we have to reverse the damage,” said Maris Maslow-Shields, a high school student from Santa Rosa, California, who marched in San Francisco.

In Paris, teenagers and kids as young as 10 traded classrooms for the streets. Marie-Lou Sahai, 15, skipped school because “the only way to make people listen is to protest.”

The demonstrations were partly inspired by the activism of Swedish teenager Greta Thunberg, who has staged weekly “Fridays for Future” demonstrations for a year, urging world leaders to step up efforts against climate change.

“It’s such a victory,” Thunberg told The Associated Press in an interview in New York. “I would never have predicted or believed that this was going to happen, and so fast — and only in 15 months.”

Thunberg spoke at a rally later Friday and was expected to participate in a U.N. Youth Climate Summit on Saturday and speak at the U.N. Climate Action Summit with global leaders on Monday.

“They have this opportunity to do something, and they should take that,” she said. “And otherwise, they should feel ashamed.”

The world has warmed about 1 degree Celsius (1.8 Fahrenheit) since before the Industrial Revolution, and scientists have attributed more than 90 percent of the increase to emissions of heat-trapping gases from fuel-burning and other human activity.

Scientists have warned that global warming will subject Earth to rising seas and more heat waves, droughts, storms and flooding, some of which have already manifested themselves.

Climate change has made record-breaking heat twice as likely as record-setting cold temperatures over the past two decades in the contiguous U.S., according to National Oceanic and Atmospheric Administration data.

Nations around the world recommitted at a 2015 summit in Paris to hold warming to less than 2 degrees Celsius (3.6 Fahrenheit) more than pre-industrial-era levels by the end of this century, and they added a more ambitious goal of limiting the increase to 1.5 C (2.7F).

But U.S. President Donald Trump subsequently announced that he would withdraw the U.S. from the agreement, which he said benefited other nations at the expense of American businesses and taxpayers.

Trump called global warming a “hoax” before becoming president. He has since said he’s “not denying climate change” but is not convinced it’s man-made or permanent.

New York protester Pearl Seidman, 13, hoped the demonstration would tell the Trump administration “that if they can’t be adults, we’re going to be adults. Because someone needs to do it.” At least one Trump supporter waved a large “Trump 2020” flag as the demonstrators marched in Manhattan.

In Florida, high school students shouted “Miami is under attack” in Miami Beach, where some worried about losing their homes to rising water. On the West Coast, student-led protests drew in some Google and Amazon employees.

Amazon, which ships more than 10 billion items a year, vowed Thursday to cut its use of fossil fuels, and Google CEO Sundar Pichai told the Financial Times in a story published Friday that eliminating the company’s carbon emissions by 2030 did not seem “unreasonable.”

Friday’s demonstrations started in Australia, where organizers estimated 300,000 protesters marched in 110 towns and cities, including Sydney and the national capital, Canberra. Demonstrators called for their country, the world’s largest exporter of coal and liquid natural gas, to take more drastic action to reduce greenhouse gas emissions.

Acting Prime Minister Michael McCormack — filling in while Prime Minister Scott Morrison was on a state visit to the United States — said Australia was already taking action to cut emissions. McCormack called the climate rallies “a disruption” that should have been held on a weekend to avoid inconveniences.

Many middle schools in largely coal-reliant Poland gave students the day off so they could participate in the rallies in Warsaw and other cities. President Andrzej Duda joined school students picking up trash in a forest. German police said more than 100,000 people gathered in front of Berlin’s landmark Brandenburg Gate, near where Chancellor Angela Merkel’s Cabinet thrashed out the final details of a 54 billion euro ($60 billion) plan to curb Germany’s greenhouse gas emissions .

Thousands of schoolchildren and their adult supporters demonstrated in London outside the British Parliament. The British government said it endorsed the protesters’ message but did not condone skipping school — a stance that did not sit well with some of the young protesters.

“If politicians were taking the appropriate action we need and had been taking this action a long time ago when it was recognized the world was changing in a negative way, then I would not have to be skipping school,” said Jessica Ahmed, a 16-year-old London student.

In Helsinki, the Finnish capital, a man dressed as Santa Claus stood outside parliament holding a sign: “My house is on fire, my reindeer can’t swim.”

Smaller protests took place in Asia, including in Japan, South Korea, the Philippines, Hong Kong and India. In the Afghan capital of Kabul, an armored personnel carrier was deployed to protect about 100 young people as they marched, led by a group of several young women carrying a banner emblazoned with “Fridays for Future.”

“We know war can kill a group of people,” said Fardeen Barakzai, one of the organizers. “The problem in Afghanistan is our leaders are fighting for power, but the real power is in nature.” 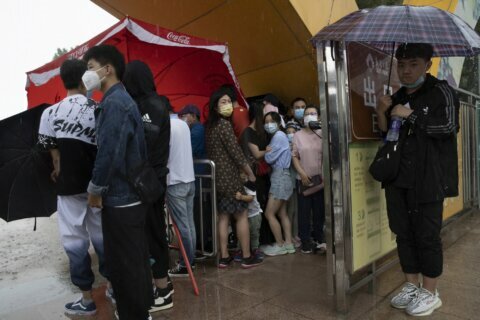 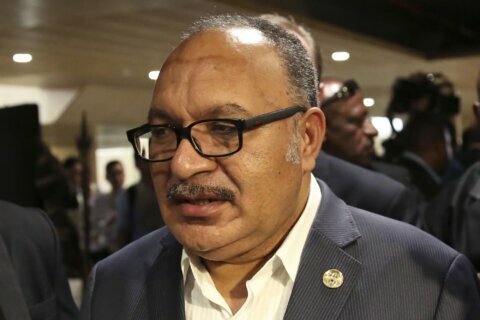 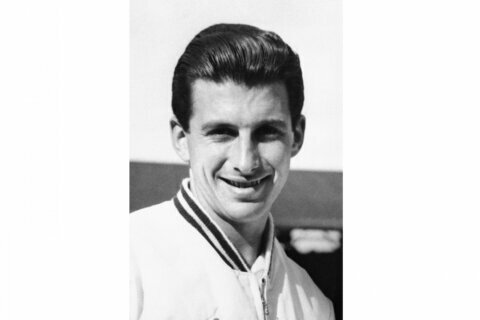