GOLD COAST, Australia (AP) — Olympic sports leaders criticized Tokyo Games organizers on Tuesday for cutting spending on how events will be presented at venues next year.

Tokyo’s latest plans for sports presentation — branding and dressing venues, plus informing and entertaining spectators — were “shockingly poor” in judo, a senior official from that governing body said.

International Judo Federation official Larisa Kiss cautioned Tokyo’s delegation against a repeat of the 2016 Rio de Janeiro Olympics “where the look was quite cheap.”

“It would be a pity to have a yearly IJF event look better than the Olympics,” Kiss said.

Under pressure from the IOC to control spending, Tokyo has maintained an operating budget of $5.6 billion with cuts in some areas offsetting increased costs in others.

Tokyo official Hide Nakamura acknowledged that some of his colleagues did not see sports presentation as a spending priority.

“Some of the organizing committee think of it as just a decoration,” the games delivery director told the audience.

“I would urge you not to look at this as a cost,” Fairweather said, adding such last-minute cuts were “not going to help you showcase the games, your country and your city.”

Tokyo officials were urged to be more creative and not impose a “one size fits all” policy for how to stage the 33 different sports.

“I know each sports has a different essence,” Tokyo sports director Koji Murofushi insisted. “We will be happy to collaborate with you to customize each sport.”

“These matters need to be urgently addressed and rethought as they really are very basic athlete services,” Hunt said.

“However, we will learn through trial and error at the test events,” he said. 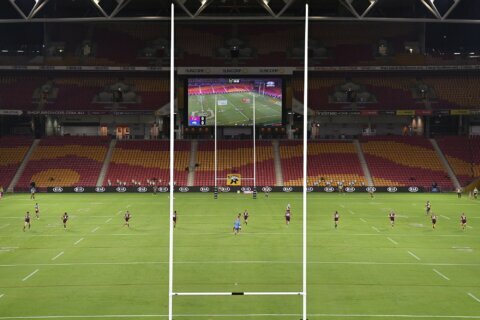