SHARM el-SHEIKH, Egypt (AP) — A day before UN climate talks were supposed to wrap up, negotiators appeared to be far apart on all the major issues being discussed.

Will countries get behind a proposal to phase down all fossil fuels? Will the demands of developing nations that rich countries compensate them for climate impacts be part of a final deal? What about calls to lower interest rates and overhaul how world financing works so that developing nations can invest in green energies?

The resounding answer to all of these questions appeared to be “no” for most of Thursday, at least if one carefully parses rhetoric and readouts from closed-door meetings. That was not to say that a significant deal couldn’t be reached, however. There would be another round of talks on Friday with extensions into the weekend a possibility.

A look at where thing stand late Thursday.

From the start of the climate conference, the dominating issue, both from many leaders and protesters, has been the question of whether rich nations should provide compensation to developing nations. Rich, high-carbon producing countries like the United States have historically done most to create global warming while developing nations have contributed little but are often most impacted by extreme weather events. While the idea has been around for years, until this year it was mostly on the fringes. For the first time, it made the official agenda.

Negotiators from countries that support the idea, called “loss and damage” in climate negotiations, have said some industrialized nations are blocking efforts at a deal.

But late Thursday, the European Union surprised everyone by proposing a pot of money for poorer nations more vulnerable to climate change. The EU executive vice president also put forward an extra push to cut down carbon dioxide emissions by all countries.

The move was welcomed by many developing countries, but its prospects were unclear.

Earlier on Thursday, Lia Nicholson of the delegation of Antigua and Barbuda, speaking on behalf of the Association of Small Island States, said the issue of loss and damage wasn’t getting serious consideration. She said there was no text on it that delegates could haggle over.

“Mr. President, where is the text?” she said to Shoukry, Egypt’s foreign minister the president of COP27. Shoukry, presiding over the session, told Nicholson she was mistaken and that there were informal discussions about the issue.

Despite the setbacks, leaders of many developing nations say they won’t give up, threatening to refuse to sign any document that doesn’t include progress on the issue.

Amid many happenings in the world — the war in Ukraine, recent U.S. elections, the Group of 20 summit in Bali, among other things — trying to build consensus between so many nations was always going to be tough. That said, many long-time observers of the annual climate conference said negotiations shouldn’t have been in such a poor state at this juncture.

Longtime negotiations analyst Alden Meyer of E3G told The Associated Press that unlike in previous years, the president of the conference, Egyptian Foreign Minister Sameh Shoukry, delayed putting together special teams of ministers to push through solutions on big issues, except loss and damage, and that’s putting everything behind. Several other analysts and negotiators laid blame at the feet of the COP27 presidency.

U.N. Secretary General Antonio Guterres, arriving in Sharm el-Sheikh, Egypt, from the G20 meeting in Bali, issued a statement calling for calm and a willingness to work together to confront climate change.

“This is no time for finger pointing,” said the statement. “The blame game is a recipe for mutually assured destruction.”

Adding to a feeling of confusion and chaos among negotiators was an Egyptian draft that had ideas which hadn’t been discussed during the summit, which began Nov. 6.

The lengthy document released early Thursday included a call for developed countries to achieve “net-negative carbon emissions by 2030.” That target goes further than any major nation has so far committed to and which would be very hard to achieve. The EU and U.S., for example, have said they aim to reach net zero emissions by 2050, China by 2060.

Negotiators were quick to make clear it was just a draft, both criticizing it and making clear it wasn’t their guide.

The head of the European Parliament at the U.N. climate conference, Bas Eirkhout, described it as “a bit of wish list” with “all the topics” thrown in.

It was “too broad, too many topics, too vague language and too many items, which I don’t think have to be in a cover decision,” said Eirkhout.

Up to this point, arguably the two most important developments to limiting climate change have come from outside developments. First, the victory of Brazilian President-elect Luiz Inacio Lula da Silva in last month’s election gave hope that his administration would crack down on illegal deforestation in the Amazon, the world’s largest rainforest. Da Silva, president between 2003 and 2010, has promised as much. On Tuesday and Wednesday, da Silva got rockstar treatment as he met with Indigenous groups, climate activists and several ministers, including U.S. Climate Envoy John Kerry.

Speaking of Kerry, he began talks with his Chinese counterpart Xie Zhenhua during the conference. Relations between the U.S. and China have been tense because of several things, most recently the visit by House Speaker Nancy Pelosi to Taiwan. As such, talks between Xie and Kerry had broken down.

U.S. President Joe Biden and Chinese President Xi Jinping met at the G20 meetings in Bali on Monday. They both said they were committed to having high-level officials from their administrations resume talks on several issues, including climate change.

China and the U.S. are the world’s No. 1 and 2 climate polluters. Climate experts say cooperation between the two nations is critical if major cuts to global emissions can happen.

Nepal’s main party leading in poll results but no majority 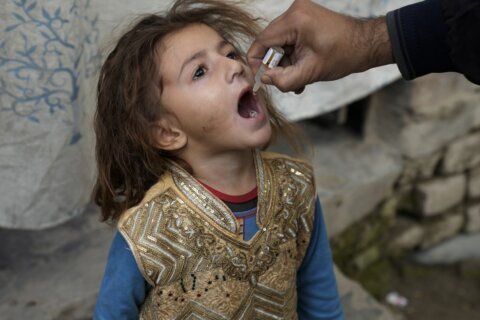