Holidays: 'Enchant' shines with millions of lights in Nats Park | Where to see holiday lights | Send in photos of decorations | How to give greener this season
Home » Asia News » Climate Migration: Filipino families…

“I keep helping other people, but then at the end, you find out that all of your family is gone,” Garing said, recalling those terrible times in 2013. “It’s so painful.”

He and his wife Hyancinth Charm Garing lost seven relatives to the typhoon, including parents, siblings and their 1-year-old daughter. Holding up a cell phone photo of her smiling daughter Hywin, the 28-year-old mother still finds it hard to believe she is gone.

Part of the wave of 5 million people displaced by the typhoon, the couple now lives in an inland community about 12 kilometers (7.5 miles) from the coast in a community that was created by the government in response to the death and devastation of Haiyan.

Days after the powerful typhoon, officials knew rebuilding wasn’t an option because the historic storm wouldn’t be the last. They announced a $3.79 billion reconstruction plan that included housing for tens of thousands of storm survivors. They also announced plans to construct a protective dike to shield 33,000 residents from future storms and a 40-meter (130-foot) buffer zone from the shoreline where development is banned.

“Remember because we are talking about climate change, our priority is really moving people away from the danger zone,” he said, adding that the island nation is seeing more frequent typhoons.

Rebuilding after the typhoon was a colossal undertaking for an impoverished country that’s seen more than its share of disasters. When the typhoon hit, the country was still recovering from a recent earthquake that struck a nearby island and from a Muslim rebel attack that razed houses.

For months, families lived in tents or homemade shacks as the government struggled to build housing. But over time, authorities built dwellings for up to 16,000 families in several locations, including the Tacloban North community. Nestled in what was once a forested valley, the tidy homes with brick-colored roofs are proving popular with storm survivors.

But many people still pine for their old lives and mourn the loss of loved ones.

Some keep photos of deceased relatives on their phones and are forced to pass a mass grave with rows upon rows of white crosses. A sign at the entrance reads in memory of “the men, women and children who perished and those still missing and … the countless people whose lives were changed forever.”

“Every Friday, I visit the cemetery to light a candle for my wife and don’t forget to pray to the Lord to help us with our daily chores,” said Reinfredo Celis, whose wife and brother died in the typhoon that hit on his birthday. “What is painful is I’m now alone.”

Being forced by climate change to move, within borders or beyond, is a growing reality expected to accelerate in the decades ahead. Over the next 30 years, 143 million people are likely to be uprooted by rising seas, drought, searing temperatures and other climate catastrophes, according to an Intergovernmental Panel on Climate Change report published earlier this year by the United Nations.

Though an individual storm cannot be blamed on climate change, studies have found that typhoons are becoming stronger and wetter. In its State of the Climate in Asia 2021 report on Monday, the World Meteorological Organization concluded economic losses from drought, floods and landslides have risen sharply in Asia. Weather- and water-related disasters, the U.N. agency found, affected 50 million people and caused $35.6 billion in damages.

“Weather, climate and water extremes are becoming more frequent and intense in many parts of the world as a result of climate change,” Petteri Taalas, secretary-general of the WMO, said in a statement. “We have more water vapor in the atmosphere, which leads to extreme rainfall and deadly flooding. The warming of the ocean fuels more powerful tropical storms, and rising sea levels increase the impacts.”

In coastal villages hit hardest by Typhoon Haiyan, known locally as Super Typhoon Yolanda, the damage is still on full display — damaged homes with roofs and walls caved in, foundations of others with only toilets remaining. The government has moved to demolish many of the remaining homes, though a few residents are refusing to relocate.

A cargo ship that washed ashore has become a popular tourist attraction. But Emelita Abillille, a fish vendor in the village of Anibong with her husband and five children, said she cries whenever she sees the ship.

While she would love to move from the disaster zone, she fears she couldn’t make a living in North Tacloban, which has few shops and jobs.

“We are willing to move there,” said Abillille, whose family has been offered a home in the new community. “Our problem is where will we get money for our food? We have to buy water there, food and our transportation. Where will I get the money?”

Jeremy Garing, too, has frustrations with the new community. The 35-year-old hair dresser must make the expensive daily commute to his job in Tacloban, although he bought a motorcycle to make it easier.

The consolation is that he knows his family — including a newborn daughter — will be there when he gets home.

“I really like it here. We will not move anymore. It’s better here,” said Garing, looking over at his sleeping daughter Chiara Mae. “It’s safe.” 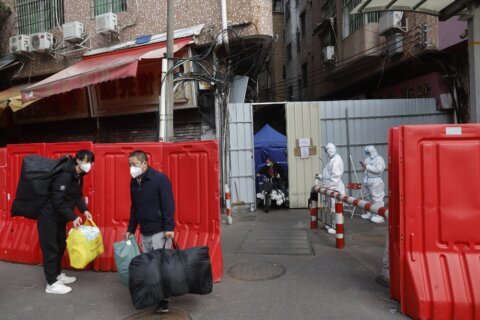 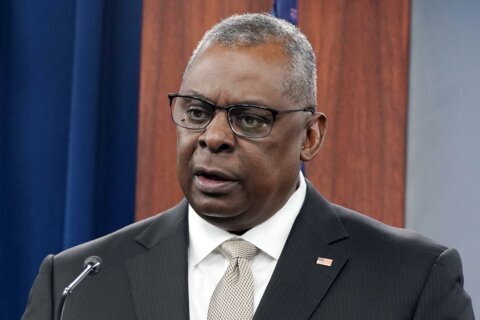