China is a big investor in wind and solar, but jittery Communist Party leaders called for more coal-fired power after economic growth slumped last year and shortages caused blackouts. That prompted warnings that carbon emissions will rise faster through 2030, when they government says they should peak.

The ruling party aims for annual coal production to rise to 4.6 billion tons in 2025, a deputy director of the Cabinet’s National Energy Administration, Ren Jingdong, said at a news conference held during a ruling party congress. That would be a 12% increase over last year’s 4.1 billion tons.

Ensuring an adequate power supply is especially sensitive after economic growth slid to 2.2% over a year earlier in the first six months of this year, less than half the official target of 5.5%. The ruling party earlier called for this year’s production to rise by 300 million tons, or about 7% of last year’s output.

The challenges of relying on renewable sources were highlighted by a dry summer that left reservoirs in China’s southwest too low to generate hydropower. That forced power cuts in Sichuan province and the major city of Chongqing.

Beijing will “give full play to the ‘ballast role’ of coal and the basic regulating role of coal power,” Ren said. He said the country will “vigorously enhance oil and gas exploration and development.”

Ren said officials are trying to ensure China meets targets in the ruling party’s latest five-year development plan for non-fossil fuel sources to supply 20% of power by 2025 and 25% by 2030. He said that includes wind, solar, hydro, nuclear and geothermal.

Another official, Zhao Chenxin, deputy director of the Cabinet’s planning agency, the National Development and Reform Commission, said plans include building 450 million kilowatts of “large-scale wind and solar bases” in the Gobi Desert in China’s north.

Beijing has spent tens of billions of dollars on solar and wind farms to reduce reliance on imported oil and gas and clean up its smog-choked cities. China accounted for about half of global investment in wind and solar in 2020.

Still, coal is expected to supply 60% of its power in the near future.

Authorities say they are shrinking carbon emissions per unit of economic output. The government reported a reduction of 3.8% last year, an improvement over 2020′s 1% gain but down from a 5.1% cut in 2017.

Last year’s total energy use increased 5.2% over 2020 after a revival of global demand for Chinese exports propelled a manufacturing boom, according to the National Bureau of Statistics. 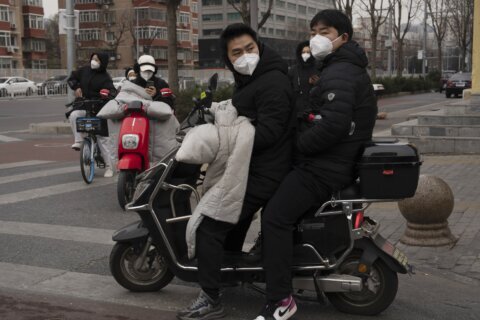