A look at suspension bridge that collapsed in India

NEW DELHI (AP) — The 143-year-old cable suspension bridge that collapsed Sunday in the western Indian state of Gujarat in one of the country’s worst disasters in years was built using the latest technology available in Europe at the time.

Its cables snapped and its walkway gave way under the weight of hundreds of sightseers, sending hundreds plunging into the water. As of late Monday, at least 133 people had died, 177 were injured and many others were missing.

Here’s a brief look at the bridge and Morbi, the town where it’s located:

Many in India are openly disdainful of the colonial past, but the Morbi bridge, which spans a wide section of the Machchu river, seems to have been an exception.

Gujarat’s official tourism website calls it “a nostalgic reminder of Victorian London” and “an artistic and technological marvel of that period.”

In March, the company that holds the contract for maintaining and managing the bridge, Oreva Group, closed it for repairs. It reopened on Oct. 26. That’s the first day of the Gujarati New Year, which coincides with the Hindu festival season. The newly reopened attraction was packed with people.

Based in Morbi, Oreva is a group of companies known mainly for making clocks, mosquito zappers and electric bikes. Local news reports said the company reopened the bridge to the public without first obtaining a “fitness certificate.”

That claim could not immediately be verified. But local officials said there would be an investigation.

Morbi city, home to about 200,000 people, has suffered other calamities.

In 1979, an upstream dam on the Machchu river burst, sending walls of water through the city and killing hundreds of people in one of India’s biggest dam disasters.

In 2001, thousands of people died in an earthquake in Gujarat. Morbi town, 150 kilometers (90 miles) from the epicenter at Bhuj, suffered widespread damage. According to a report in the newspaper Times of India, the bridge also was severely damaged. 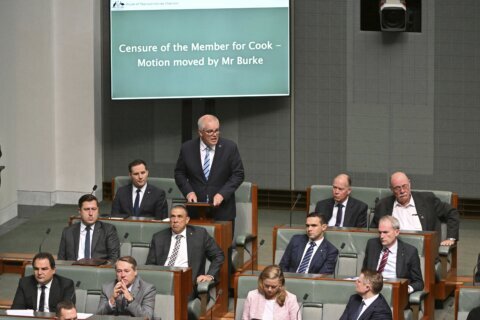