ISLAMABAD (AP) — Pakistan deployed thousands more doctors and medics to battle the outbreak of disease as the death toll from the unprecedented floods that have gripped the country this summer surpassed 1,600 on Friday, officials said.

The disaster management agency said 10 more people had died from the floods in the past 24 hours — four in Sindh, the worst-hit province in the deluge, and six in Baluchistan province — bringing the overall number of fatalities to 1,606 across Pakistan.

In Sindh, where thousands of makeshift medical camps for flood survivors have been set up, the National Disaster Management Authority said outbreaks of a spate of illnesses such as typhoid, malaria and dengue fever have killed at least 300 of the flood victims.

Some of the doctors who refused to work in Sindh province have been fired by the government, according to the provincial health department. Floods have killed 728 people, including 313 children and 134 women in the province since July.

The monsoon rains and flooding, which many experts say are fueled by climate change, have also affected 33 million people and destroyed or damaged 2 million homes across Pakistan. About half a million flood survivors are homeless, living in tents and makeshift structures.

Over the past two months, Pakistan sent nearly 10,000 doctors, nurses and other medical staff to tend to survivors in across Sindh. About 18,000 doctors and nearly 38,000 paramedics are treating survivors in the province, according to the latest data from the health department.

Floods have also damaged more than 1,000 health facilities in Sindh, forcing some survivors to travel to other areas to seek medical help.

Waterborne and other diseases in the past two months have killed 334 flood victims, authorities said. The death toll prompted the World Health Organization last week to raise the alarm about a “second disaster,” with doctors on the ground racing to battle outbreaks.

Some floodwaters in Pakistan have receded, but many districts in Sindh are still submerged, and displaced people living in tents and makeshift camps face the threat of gastrointestinal infections, dengue fever and malaria, which are on the rise amid stagnant waters.

Also Friday in Sindh, teams of fumigators fanned out across flood-hit areas, spraying in an effort to keep mosquitos at bay and prevent further outbreaks of dengue fever and malaria. Over 134,000 cases of diarrhea and 44,000 cases of malaria were reported in the hardest-hit areas of Sindh this past week.

Dengue fever is also on the rise, especially in Karachi, the provincial capital, where health teams were spraying insecticide onto puddles of water in the streets.

The devastation has led the United Nations to consider sending more money than it committed during its flash appeal for $160 million to support Pakistan’s flood response.

Pakistani Prime Minister Shahbaz Sharif, who is in New York, spoke Friday at the U.N. General Assembly, detailing the level of the devastation in his country and seeking more help from the international community. Sharif’s office said he met earlier with President Joe Biden at a reception for the world leaders gathering in New York.

On Thursday, Sharif tweeted his thanks to Biden for highlighting the plight of flood victims and urging the world community to help Pakistan as it was still underwater and needed help. Washington is a key supporter for Pakistan’s response to floods.

Pakistan’s Foreign Ministry says 123 flights carrying aid from various countries and U.N. agencies have ferried in desperately needed help. Local authorities are distributing these supplies, which include tents, food items, kitchen sets and bottles of drinking water, among flood survivors across the country.

On Wednesday, Julien Harneis, the U.N. resident coordinator in Pakistan, said the humanitarian situation remains dire, with widespread damage to physical infrastructure and ongoing harm to people and livestock. Outbreaks of diarrhea, typhoid and malaria are increasing rapidly as millions of people sleep in temporary shelters or in the open, he said. 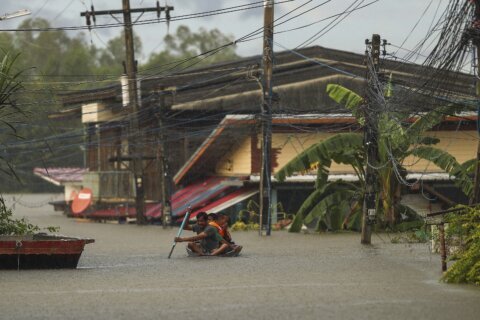 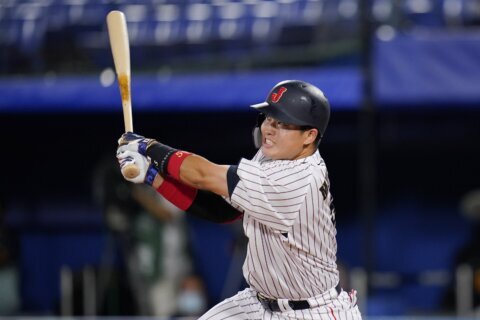