TOKYO (AP) — Defending champion Naomi Osaka withdrew from the Pan Pacific Open ahead of her second-round match due to illness on Thursday.

“I am really sorry that I am not able to compete today,” Osaka said in a statement. “It’s an honor to be able to play at the Toray Pan Pacific Open in front of the amazing fans here in Japan. This has and always will be a special tournament for me and I wish I could have stepped on court, but my body won’t let me. I will see you next year.”

Osaka didn’t specify the illness and said before the tournament she was fit and healthy. She was champion of the previous Pan Pacific in 2019 and advanced to the second round this week after Daria Saville retired with a knee injury in their first-round match.

Fifth-seeded Beatriz Haddad Maia of Brazil benefited by a walkover from Osaka’s withdrawal and has a quarterfinal against fourth-seeded Veronika Kudermetova, who dominated Mexican qualifier Fernanda Contreras Gomez 6-0, 6-1.

Martic kept her nerve as 2018 champion Pliskova lost hers. The former world No. 1 was not at her best, while Martic played steadily throughout, breaking twice in each set, including the final games of each set. Pliskova handed the win to her fellow tall baseliner with her fifth double fault.

“Karolina is a great player and she’s beaten me many times in the past, so I expected a tough match,” Martic said. “So I was just happy to win it.”

She won it in the nick of time as it started to rain right at the end of the second set. A third set would have been under the roof of Ariake Coliseum.

“I was hoping we would play outdoors because it’s an outdoor tournament, but at match point it started to rain really hard, so I was really happy to win that point,” Martic said.

Samsonova out-slugged Wang Xinyu as both players stayed aggressive throughout. Samsonova hit three aces to wrap up the first-set tiebreak. In the second set, her high-pressure play broke Wang in the eighth game and she rounded off the match with a 13th ace.

“She was playing amazing,” Samsonova said. “She’s a great player already but my serves were enough to maintain my game.”

Contreras Gomez had no answer for Kudermetova’s clinical efficiency as the good parts of her game that saw her defeat 2020 Australian Open champion Sofia Kenin in the first round deserted her. Fourth-seeded Kudermetova didn’t put a foot wrong but should face far sterner opposition from Haddad Maia in the quarterfinals. 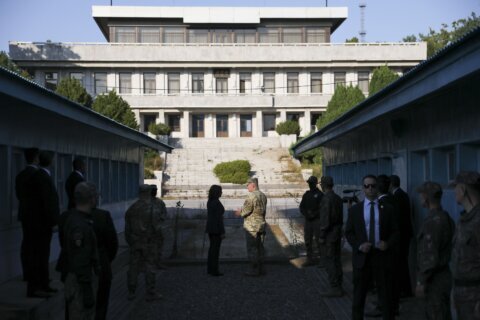