BANGKOK (AP) — Shares were mixed Friday in Asia after a muddled day on Wall Street, where benchmarks meandered following another encouraging report about inflation.

Tokyo’s Nikkei 225 surged 2.5%, catching up on gains after being closed Thursday for a holiday. Hong Kong and Seoul also advanced, while Shanghai and Sydney declined. U.S. futures edged higher and oil prices fell.

Markets got a boost Thursday after a report showed inflation at the wholesale level slowed more than economists expected last month. That came a day after a cooler-than-expected reading on inflation at the consumer level which raised hopes among investors that inflation may be close to a peak and that the Federal Reserve will be less aggressive about raising interest rates than feared.

Inflation is still painfully high and the economy has given false signals before that relief was on the way only for investors to have the rug pulled out from underneath them. Some Fed officials also made comments after Wednesday’s inflation report suggesting their battle against rising prices is far from over.

“Stocks were unable to hold onto robust gains following back-to-back reports that suggest inflation has peaked. After a little pushback from the Fed, Wall Street is starting to second guess how soon the Fed will be in a position to pivot” to slowing rate hikes, Edward Moya of OANDA said in a commentary.

Enough hope for a peak in inflation and Fed aggressiveness has built that the S&P 500 has roughly halved its losses from earlier in the year. It’s up more than 14% from its bottom in mid-June.

Technology stocks and other investments beaten down the most earlier in the year by the Fed’s aggressive rate hikes have been among the strongest, and the Nasdaq has climbed more than 20% from its low in June.

Technology and health care stocks were among the biggest weights on the S&P 500, keeping gains by energy companies, banks and other sectors in check.

The Walt Disney Co. jumped 4.7% after the entertainment company reported stronger profit for its latest quarter than analysts expected.

Worries about a possible recession still loom over the market, as the Federal Reserve continues to raise interest rates to fight inflation.

A report on Thursday showed fewer U.S. workers filed for jobless claims last week than expected, a potentially encouraging sign about layoffs. But it was nevertheless the highest number since November.

Traders are now betting on the Fed to raise overnight interest rates by half a percentage point at its meeting next month, down from Fed’s last two increases of 0.75 percentage points. Even if the Fed can manage to slow the economy enough to stamp out inflation without causing a recession, higher interest rates pull downward on prices for all kinds of investments regardless.

It’s still below the two-year yield, which sits at 3.21%. That’s a relatively unusual occurrence that some investors see as a fairly reliable signal of a pending recession, though the gap between the two has narrowed somewhat.

In other trading Friday, U.S. benchmark crude oil shed 46 cents to $93.88 per barrel in electronic trading on the New York Mercantile Exchange. It jumped $2.41 to $94.34 per barrel on Thursday.

Brent crude oil, the basis for pricing for international trading, declined 43 cents to $99.17 per barrel. 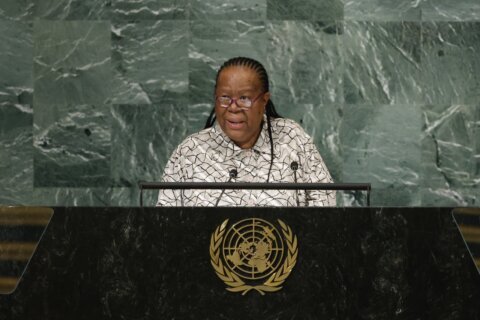 As Ukraine worries UN, some leaders rue what’s pushed aside