BANGKOK (AP) — International outrage over Myanmar’s execution of four political prisoners intensified Tuesday with grassroots protests and strong condemnation from world governments, as well as fears the hangings could derail nascent attempts to bring an end to the violence and unrest that has beset the Southeast Asian nation since the military seized power last year.

Myanmar’s military-led government that seized power from elected leader Aung San Suu Kyi in February 2021 has been accused of thousands of extrajudicial killings since then, but the hangings announced Monday were the country’s first official executions in decades.

“We feel that this is a crime against humanity,” said Malaysian Foreign Minister Saifuddin Abdullah, speaking at the side of the United Nations’ Special Envoy on Myanmar Noeleen Heyzer at a press conference in Kuala Lumpur.

He said the executions would be a focus of the upcoming meetings of the Association of Southeast Asian Nations foreign ministers, which begin in Cambodia in a week.

Myanmar is a member of the influential ASEAN group, which has been trying to implement a five-point consensus it reached on Myanmar last year calling for dialogue among all concerned parties, provision of humanitarian assistance, an immediate cessation of violence and a visit by a special envoy to meet all parties.

With the executions, he said, “we look at it as if the junta is making a mockery of the five point process.”

Heyzer said that the U.N. sees the executions as a “blatant violation” of a person’s “right to life, liberty and security.”

In Bangkok, hundreds of pro-democracy demonstrators protested outside neighboring Myanmar’s embassy, waving flags and chanting slogans amid a heavy downpour.

“The dictators used their power arbitrarily,” yelled a young man through a bullhorn to the crowd, some of whom waved pictures of Suu Kyi or the four executed men. “We can’t tolerate this any more.”

Myanmar’s government spokesperson, Maj. Gen. Zaw Min Tun, firmly rejected the criticism, saying the executions were carried out in line with the country’s law and not for “personal” reasons.

“We knew that there may be criticism when the death penalties were handed down and conducted in line with domestic law,” he told reporters. “However, we did it for reasons of domestic stability, for the rule of law and order, and security.”

He said the executed men were convicted of crimes involving supporting violent “terrorists” and acts — allegations denied by their defenders — and said their punishment was “appropriate.”

“If we considered leniency for those who committed such crimes it would have been cruel and without sympathy for the victims,” he said.

Among the four executed was Phyo Zeya Thaw, a 41-year-old former lawmaker from Suu Kyi’s party, and Kyaw Min Yu, a 53-year-old democracy activist better known as Ko Jimmy. All were tried, convicted and sentenced by a military tribunal with no possibility of appeal.

The executions were carried out over the weekend, and came as a surprise even to family members.

Phyo Zeya Thaw’s mother Khin Win May told The Associated Press she had just spoken with her son via video conference on Friday and he had asked her for reading glasses, books and some spending money.

“I was a little shocked when I heard about the execution, I think it will take some time,” she said.

She said she hoped her son and the others would be seen as martyrs for their cause.

“I’m proud of all of them as they sacrificed their lives for the country,” she said.

The execution of the four activists prompted immediate calls from around the world for a moratorium on carrying out any further sentences, and condemnation for what was broadly seen as a politically motivated move.

Myanmar, formerly known as Burma, announced in June that it was going to resume executing prisoners and has 113 others who have been sentenced to death, although 41 of those were convicted in absentia, according to the Assistance Association for Political Prisoners, a non-governmental organization that tracks killing and arrests. At the same time, 2,120 civilians have been killed by security forces since the military takeover.

“This was a barbaric act by Myanmar’s military regime,” said New Zealand’s Foreign Minister Nanaia Mahuta of the four executions carried out. “New Zealand condemns these actions in the strongest possible terms.”

Australia’s Foreign Minister Penny Wong said she was “appalled” by the executions.

“Australia opposes the death penalty in all circumstances for all people,” she said.

Earlier, Australia and New Zealand had joined the European Union, Japan, the United Kingdom, the United States, Canada, Norway and South Korea in a joint statement condemning the executions.

It said the move represented a setback to the group’s efforts to facilitate a dialogue between the military leadership and opponents.

“We strongly and urgently call on all parties concerned to desist from taking actions that would only further aggravate the crisis, hinder peaceful dialogue among all parties concerned, and endanger peace, security and stability, not only in Myanmar, but the whole region,” the group said in a statement.

The military’s seizure of power from Suu Kyi’s elected government triggered peaceful protests that soon escalated to armed resistance and then to widespread fighting that some U.N. experts characterize as a civil war.

News of the executions prompted a flash-demonstration Monday in Myanmar’s largest city, Yangon, where about a dozen protesters took to the streets marching behind a banner saying “we are never afraid,” then quickly slipping away before authorities could confront them.

Similar demonstrations broke out in more rural areas across Myanmar on both Monday and Tuesday.

The last judicial execution to be carried out in Myanmar is generally believed to have been of another political offender, student leader Salai Tin Maung Oo, in 1976 under a previous military government led by dictator Ne Win. 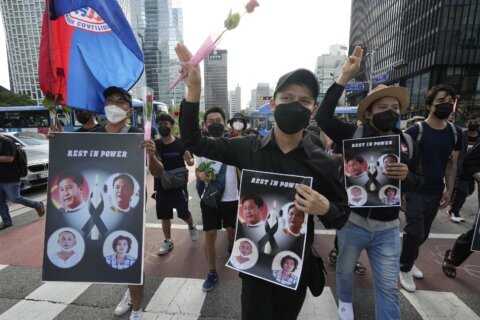