US official warns Asian aggressors will face Western might

MANILA, Philippines (AP) — Any Asian aggressor who violates the sovereignty of other countries in the region risks punitive counter actions, just like what Russia is confronting now for its invasion of Ukraine, the U.S. secretary of the Navy said in a veiled warning to China’s increasingly assertive behavior.

Carlos Del Toro told The Associated Press in an interview Tuesday night in Manila that the U.S. military focus in the Asia-Pacific region, particularly in the disputed South China Sea, would never slacken and in fact has intensified despite the war in Ukraine.

He did not name China but underscored that Beijing has encroached in sovereign waters of its Asian neighbors and violated international law with impunity.

He renewed assurances by President Joe Biden that the U.S. would honor its obligations under a 1951 Mutual Defense Treaty in case Philippine forces, ships and aircraft come under attack in the disputed South China Sea, where Manila and Beijing have had increasingly tense territorial spats in the last decade.

Vietnam, Malaysia, Taiwan and Brunei also lay claim to the strategic waterway, one of the world’s busiest, which China claims virtually in its entirety on historical grounds. Beijing rejected a 2016 international arbitration ruling that invalidated its claims and continues to defy the landmark decision.

“As President Biden has said, if one country violates one inch of Filipino sovereignty, whether it be at sea or on shore or an offshore island, we will be there to support the Filipino nation and the Filipino people in every possible way,” Del Toro said.

China’s move to transform seven disputed reefs into missile-protected island bases in the Spratlys, the most hotly contested section of the South China Sea, “is very concerning” and prompted the U.S. and other Western nations to press on with freedom of navigation patrols around the Chinese-claimed territories to underscore “that they are not in the possession of the PRC,” he said, referring to the People’s Republic of China.

Chinese officials were not immediately available for comment on Del Toro’s remarks but they have repeatedly warned the U.S. to stay away from they say is a purely Asian dispute. Chinese forces have at times responded to U.S. and Australian aerial and sea patrols by firing flares and using jamming equipment to warn them to move away. Some U.S. Navy ships have been chased closely, according to U.S. military officials.

The Chinese actions increase the risk of miscalculations and U.S. forces have been trained “to be very disciplined” and to stick to long-established rules of engagement to avoid confrontations, Del Toro said.

“It’s important to videotape all of these illegal actions that these countries are actually doing so the entire world can see exactly how they are behaving,” he said.

Del Toro said potential Asian aggressors should learn from the current troubles of Russian President Vladimir Putin, who has faced sanctions from Western nations and their allies, which also provide weapons and humanitarian support to Ukrainians.

“I think that’s a tremendous lesson that countries who were free, democratic and principled will work together against adversaries who were not,” he said.

If such level of aggression is ever committed in the Asia-Pacific, “I’m convinced that allies and partners will come together to do the same thing here in the Pacific,” Del Toro said.

After meetings in Singapore and Thailand, Del Toro flew to the Philippines this week to meet top military and defense officials and hold, he said, “some classified discussions about additional capabilities that we could actually continue to help provide to the Philippines, a call for greater cooperation for more … complicated exercises.”

He cited the expansion of American combat exercises with Filipino forces and an ongoing 26-nation exercise in Hawaii involving 38 warships, four submarines and thousands of military personnel. Called the Rim of the Pacific Exercise, the drills are the world’s largest held biennially.

America’s military engagement with the Philippines ran into difficulties under former President Rodrigo Duterte, who threatened to end the presence of visiting American forces and a key defense pact that allowed thousands of U.S. Marines and troops to train in the country, Washington’s oldest treaty in Asia. But the alliance held up.

The brash-talking populist had often criticized U.S. security policy while nurturing cozy ties with Chinese President Xi Jinping and Putin. His tirades against Washington eased after it provided millions of doses of coronavirus vaccine at the height of the pandemic in the Philippines.

Del Toro was behind a recent decision to name a future U.S. Navy destroyer the USS Telesforo Trinidad, in honor of a Filipino-American sailor who rescued two crew members when their ship caught fire more than a century ago.

“It’s symbolic of the bonds between our two nations, our commitment to the shared values … to freedom, and democracy,” he said. 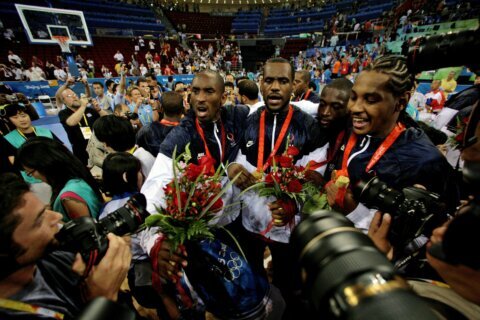