China accuses US of ‘navigation bullying’ in South China Sea

The Chinese Embassy in Manila said it strongly deplored U.S. Secretary of the Navy Carlos Del Toro’s remarks, which were “unfounded accusations against and maliciously smeared China” and inflated the “China threat.”

In an interview Tuesday with The Associated Press while on a visit to Manila, Del Toro underscored how Beijing has encroached in sovereign waters of its Asian neighbors in violation of international law.

U.S. military focus in the Asia-Pacific region, particularly in the disputed South China Sea, would never slacken and, in fact, has intensified despite the war in Ukraine, he said in an assurance to Asian allies, including the Philippines.

China has had increasingly tense territorial spats in recent years with the Philippines, Vietnam and Malaysia in the South China Sea, which China claims virtually in its entirety on historical grounds. Brunei and Taiwan also have claims in the contested waters.

Washington lays no claims to the strategic waters but has said the peaceful resolution of the disputes — along with freedom of navigation and overflight in the waterway where a bulk of world trade transits — are in the U.S. national interest.

Beijing rejected a 2016 international arbitration ruling that invalidated its claims and continues to defy the landmark decision on a case brought up by the Philippine government.

Del Toro renewed assurances by President Joe Biden that the U.S. would honor its obligations under a 1951 Mutual Defense Treaty in case Philippine forces, ships and aircraft come under attack in the contested waters.

“As President Biden has said, if one country violates one inch of Filipino sovereignty, whether it be at sea or on shore or an offshore island, we will be there to support the Filipino nation and the Filipino people in every possible way,” Del Toro said.

China’s move to transform seven disputed reefs into missile-protected island bases in the Spratlys, the most hotly contested section of the South China Sea, “is very concerning” and prompted the U.S. and other Western nations to press on with freedom of navigation patrols around the Chinese-claimed territories.

But the Chinese Embassy said the U.S. military deployments “from half a globe away” aimed to “to flex muscles, make military provocations and create maritime and air tensions,” conducting “navigation bullying” in the name of freedom of navigation.

“In an attempt to preserve its hegemony, the U.S. keeps intensifying power projection in this region, and deliberately seeks to widen differences and provoke tensions,” it said.

China and other rival claimants “have exercised restraint, kept their differences and disputes in a proper place, and got them on the track of consultation and management,” the embassy said.

However, rival claimant states, including the Philippines and Vietnam, have filed numerous diplomatic protests over the years amid China’s increasingly assertive actions, including its transformation of seven disputed reefs into what are now missile-protected island bases.

Diplomatic talks have eased occasional confrontation but not ended them.

“The South China Sea is not a ‘hunting ground’ for countries outside the region, still less should it be a ‘wrestling ground’ for big powers,” the Chinese statement said. “We staunchly support all efforts that are conducive to peaceful settlement and management of disputes, and unequivocally reject words and actions that aim to stoke tension and confrontation in the region.”

Del Toro told the AP that potential aggressors in the region should learn from the current troubles of Russian President Vladimir Putin, who has faced sanctions from Western nations and their allies, which also provide weapons and humanitarian support to Ukrainians battling Russia’s invasion forces.

If such level of aggression is ever committed in the Asia-Pacific, “I’m convinced that allies and partners will come together to do the same thing here in the Pacific,” Del Toro said. 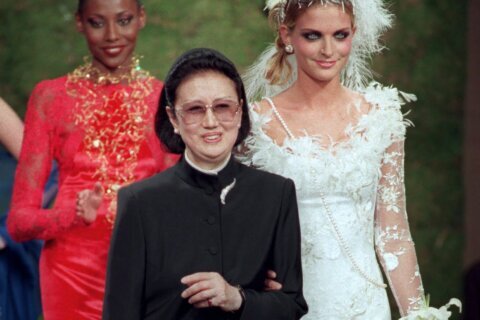