Investors appear to have grown more convinced that the Federal Reserve may temper its aggressive interest rate hikes aimed at taming inflation after the Commerce Department reported the U.S. economy contracted at a 0.9% annual pace in the last quarter. That followed a 1.6% year-on-year drop in the first quarter.

Investors were cautiously eyeing regional tensions over China’s stance on Taiwan after President Joe Biden and China’s Xi Jinping spoke for more than two hours on Thursday. China left no doubt it blames the U.S. for a deteriorating relationship, but the White House said call’s aim was to “responsibly manage our differences and work together where our interests align.”

The announcement after a planning meeting of the ruling Communist Party said Thursday that Beijing will try to prop up sagging consumer demand but will stick to strict anti-COVID-19 tactics that have disrupted manufacturing and trade. It underscores the high cost Xi’s government is willing to incur to stop the virus in a politically sensitive year when he is widely expected to try to extend his term in power.

“On the economic data front, easing China’s restrictions also drove a stronger-than-expected June output for Japan, with China’s reopening potentially having a positive knock-on impact across the region as well into the second half of the year,” said Yeap Jun Rong, market strategist at IG in Singapore.

A surge in COVID-19 infections to record levels in many parts of Japan has raised concern. But Robert Carnell, regional head of research Asia-Pacific at ING believes that Japan’s second quarter GDP, or gross domestic product, will rebound marginally from the first quarter’s contraction.

Consecutive quarters of falling GDP are an informal, though not definitive, indicator of what economists call a technical recession.

The Federal Reserve has made slowing the U.S. economy to tame the highest inflation in 40 years its goal by raising interest rates, most recently on Wednesday. The latest GDP report, along with other recent weak economic data, could be giving some investors confidence that the central bank will be able to ease up on the size of any further rate hikes.

In a research note Thursday, Jonathan Golub, chief U.S. equity strategist at Credit Suisse Securities, said “Whether or not we are in a recession will be debated by academics in the months ahead. However, today’s report unequivocally reflects a substantial weakening in economic activity, and raises the likelihood of a dovish pivot by the Fed.”

The central bank raised its key short-term interest rate by 0.75 percentage points on Wednesday, lifting it to the highest level since 2018. The move sparked a broad market rally led by technology stocks that helped give the Nasdaq its biggest gain in over two years. The major indexes are now all on pace for a weekly gain, extending Wall Street’s strong July rally.

In a busy week of corporate earnings reports investors have focused on what companies are saying about inflation and the impact rising interest rates are having on their business and customers.

Communication services stocks were the only laggards. Meta Platforms fell 5.2% after the social media giant said its revenue fell last quarter for the first time ever, dragged down by a drop in ad spending.

In energy trading, benchmark U.S. crude gained 25 cents to $97.28 a barrel in electronic trading on the New York Mercantile Exchange. It lost 84 cents to $96.42 on Thursday. 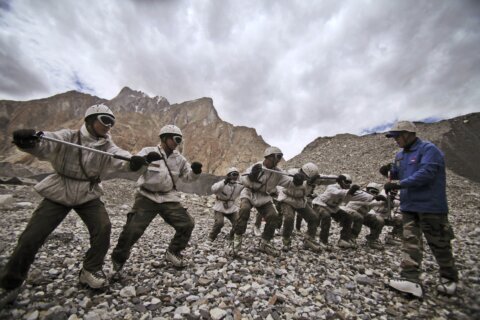