China defends ‘zero-COVID’ after US envoy warns of costs

BEIJING (AP) — China on Friday defended its tough “zero-COVID” policy after the U.S. ambassador said it was causing serious damage to the global economy and foreign business sentiment.

Foreign Ministry spokesperson Wang Wenbin said the Chinese economy is recovering from the effects of the pandemic and “facts prove” the policy mandating lockdowns, quarantines and mass testing is “suitable for China’s national conditions and has stood the test of history.”

“We have full confidence that (we can) contain the epidemic, steady the economy and achieve the goal of safe economic development,” Wang said at a daily briefing.

China has sought to completely eliminate outbreaks of COVID-19 with tough restrictions, while most other countries are relaxing their anti-coronavirus measures to “live with” the disease.

Ambassador Nicholas Burns said on Thursday that the “zero-COVID” policy has “had a major impact” on business sentiment, singling out as especially damaging a two-month lockdown in Shanghai, China’s largest city and key financial hub.

Most of Shanghai’s 25 million people were confined to their homes or immediate neighborhoods, and hundreds of thousands continue to remain under restrictions. Rolling lockdowns have also continued to Beijing and other cities.

Critics say the policy is disrupting global supply chains and hurting employment and consumption in China. The U.N.’s World Health Organization has called it unsustainable. China denounced the remarks as irresponsible.

Burns said in a virtual address to the Brookings Institution think tank that there were 40,000 American citizens in the Shanghai area before the pandemic, but that “lots and lots of those people have gone home.” Diplomats from Europe, Japan and other countries report similar declines, he said.

He said few American companies are leaving China completely because of its continuing importance, “but from the results that I’ve read, and the conversations I’ve had with lots of business leaders here, I think there is a hesitancy to invest in future obligations until they can see the end of this.”

The U.S. and China recorded $650 billion in trade last year, and around 1,100 American companies are operating in China.

Chinese restrictions have all but ended visits by U.S. government officials and business leaders, while the number of American students has dropped sharply since China suspended issuing student visas.

“It’s difficult to convince any of my colleagues in Washington to come here if I tell them that when they do it, they’ve to quarantine for 14 days before they can have a single meeting,” Burns said. “And I understand their unwillingness to do that.”

Burns said the Chinese government is signaling that the “zero-COVID” policy will probably be extended at least into the beginning months of 2023.

Burns, who has declared that relations between Washington and Beijing are at their lowest point since former President Richard Nixon visited in 1972, said China’s aggressive foreign policy has intensified competition between the countries. But he said they still have multiple areas in which they can engage constructively, including on climate change, anti-narcotics measures and agricultural trade.

Burns said much of his job is focused on outreach to the Chinese public, a task made more difficult by COVID-19 restrictions and the government’s strict censorship.

A recent speech on China by U.S. Secretary of State Antony Blinken that the embassy posted on China’s Twitter-like Weibo social media platform was taken down within about 2 1/2 hours, but drew large numbers of views while it was up, he said.

A second attempt to post it three days later resulted in it being censored within 20 minutes, Burns said.

“So that’s the game that they play,” he said. 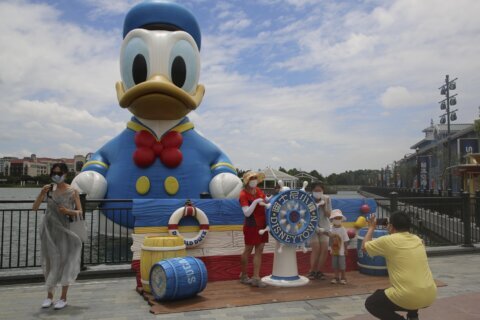