JAKARTA, Indonesia (AP) — Australian Prime Minister Anthony Albanese on Monday looked to move beyond regional issues that have been key in his trips abroad by promoting the importance of building stronger economic ties with neighboring Indonesia.

The visit was only Albanese’s second overseas trip since his inauguration two weeks ago.

After meeting with Widodo, Albanese said in a joint news conference that Indonesia, Australia’s closest major neighbor, is on track to be one of the world’s five largest economies.

He also offered Australian assistance to help with the design and construction of Indonesia’s capital — which is being relocated from Jakarta to the island of Borneo — and pledged to deliver an additional $470 million within four years to support bilateral and regional development assistance programs in Southeast Asia.

But Albanese did not bring up the thorny issue of the trilateral security agreement between Australia, the United Kingdom and the United States that Indonesian President Joko Widodo, at a virtual meeting with leaders of the Association of Southeast Asian Nations last October, said could spark an arms race.

Under the agreement, dubbed AUKUS, Australia would acquire nuclear-powered submarines. Some ASEAN nations fear the pact could escalate tensions in hot spots such as the disputed South China Sea, which China claims most of and warned the pact would threaten regional stability.

As Russia’s invasion of Ukraine brought renewed concerns over China’s assertiveness in the Indo-Pacific in March, Quad group countries Australia, Japan, the U.S., and India said they opposed any unilateral use of force to change the status quo in their region.

Santo Darmosumarto, director of East Asia and Pacific Affairs for Indonesia’s Foreign Ministry, said in a briefing ahead of the visit that his government recognizes the range of its partnership with Australia, including economic cooperation and people-to-people relations, which “appear to dominate cooperation between the two countries.”

“IA-CEPA, which came into force in 2020, had not been implemented effectively due to the COVID-19 pandemic despite trade between the countries increasing by around 70% last year,” Darmosumarto said.

Indonesia is the chair of the Group of 20 biggest economies this year and ASEAN next year.

People questioned whether Albanese would still attend the G-20 summit after Russian President Vladimir Putin announced he will be in attendance.

Albanese confirmed he would, adding, “I will work closely with President Widodo to help deliver a successful summit.”

In a separate news conference at the Australian embassy in Jakarta, Albanese reiterated his commitment to attending the G-20 meeting this year, saying it would be the most effective way to navigate the post-COVID-19 global economic recovery.

One expert said that for some in Australia, Indonesia’s strategic importance goes beyond the G-20 and ASEAN chairmanships.

“Indonesia has always been seen as Australia’s strategic gateway — for better or worse,” said Evan A. Laksmana, senior researcher at the Center for Strategic and International Studies in Jakarta, adding that the quality of Australia’s relationships with Asia and beyond has, to a large extent, depended on its relationship with Indonesia.

“Other Southeast Asian states even occasionally measure Australia’s regional engagement by how well it manages ties with Indonesia,” Laksmana said.

During the visit, Albanese is scheduled to meet with ASEAN Secretary General Lim Jock Hoi on Monday to discuss Australia’s commitment to Southeast Asia and ASEAN. Before returning to Canberra on Tuesday, Albanese plans to visit Makassar, the capital city of Indonesia’s South Sulawesi province.

Although Indonesia, a vast archipelago nation of 270 million people, is often presented as one of Australia’s most important neighbors and strategic allies, the relationship has undergone various ups and downs. Recent disagreements include allegations of wiretapping by Australian Signals Directorate to monitor the private phone calls of Indonesia’s then-President Susilo Bambang Yudhoyono, his wife and other senior officials, Indonesia’s use of capital punishment on Australian drug smugglers, and cases of people smuggling. 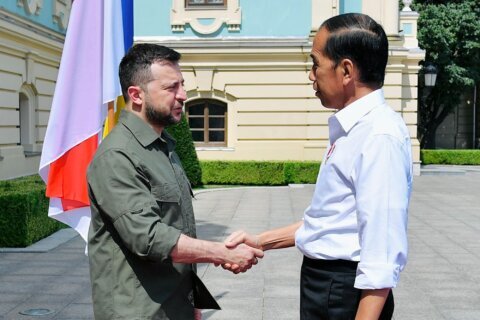