UNITED NATIONS (AP) — The United States called an emergency meeting of the U.N. Security Council on Wednesday following North Korea’s latest test of a ballistic missile that was likely fired from a submarine.

The test was the latest sign of North Korean leader Kim Jong Un carrying out a recent vow to speed up development of nuclear weapons.

The United States holds the rotating presidency of the council this month and called the meeting to discuss the North’s latest launches, a spokesperson for the U.S. Mission to the U.N. said, speaking on condition of anonymity ahead of an official announcement.

The meeting is expected to take place Wednesday afternoon and would be open.

So far this year, North Korea has fired missiles 15 times. They include the country’s first test of an intercontinental ballistic missile since 2017 in March that demonstrated a potential range to reach the entirety of the U.S. mainland.

The launch on Saturday was apparently North Korea’s first demonstration of a submarine-launched ballistic missile system since October 2021, when it fired a new short-range missile.

The latest launch came just ahead of the inauguration on Tuesday of South Korean President-elect Yoon Suk Yeol, who has vowed to take a tougher approach over the North’s nuclear ambitions.

U.N. deputy spokesman Farhan Haq said Monday that the United Nations has expressed concern at all missile tests and “we want to call, once again for a return to dialogue among all the parties on the Korean Peninsula so that we can proceed with the peaceful denuclearization of the Korean Peninsula.”

The United States has circulated a draft resolution to the Security Council seeking additional sanctions on North Korea for its spate of tests this year. U.S. Ambassador Linda Thomas-Greenfield told reporters last Tuesday that “it is our plan to move forward with that resolution during this month” while the U.S. holds the council presidency.

But diplomats, speaking on condition of anonymity because discussions have been private, said the resolution faces an uphill struggle because Russia and China, which have veto power in the council, want to see sanctions on North Korea eased — not increased.

The council originally imposed sanctions after the North’s first nuclear test explosion in 2006 and tightened them over the years. But last fall China and Russia called for lifting various sanctions on their neighbor, and in January they blocked the Security Council from imposing sanctions on five North Korean officials.

Observers say North Korea’s unusually fast pace in weapons development this year is aimed at advancing its dual goals of modernizing its missile programs and applying pressure on the United States over a deepening freeze in nuclear negotiations.

They say Kim eventually aims to use his expanded arsenal to win an international recognition of North Korea as a nuclear state that he believes would help force the United States to relax international economic sanctions on his country.

There are signs that North Korea is preparing for a nuclear test at its remote northeastern testing facility. If a test is conducted it would be the seventh explosion of a nuclear weapon by North Korea and the first since 2017.

Kim warned again in late April that he will continue to develop North Korea’s nuclear-armed military so it could “preemptively and thoroughly contain and frustrate all dangerous attempts and threatening moves, including ever-escalating nuclear threats from hostile forces, if necessary,” according to the North’s official Korean Central News Agency. 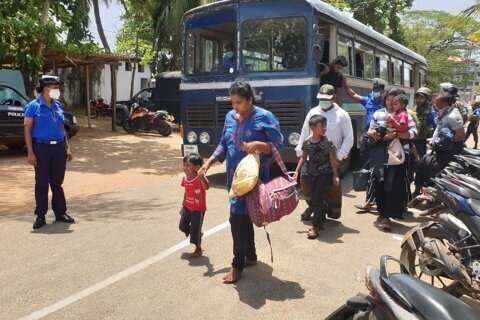