PALU, Indonesia (AP) — Indonesian police said Wednesday they arrested 24 suspected militants believed to have links to extremists accused of beheadings in remote mountain jungles and who pledged allegiance to the Islamic State group.

The suspects are active supporters of the East Indonesia Mujahideen, Sufahriadi said. The extremist network has claimed responsibility for the killings of police officers and minority Christians in Central Sulawesi, some by beheading, and pledged allegiance to the Islamic State group.

The group has been weakened over the past decade by a sustained crackdown on militants by joint military and police forces. More than 40 of its remaining members have plotted and launched attacks from the mountainous jungles of Poso district.

Security operations in the area killed the group’s leader, Abu Wardah Santoso, in 2016. Dozens of other leaders and members of the group have been killed or captured since then, including Ali Kalora, another leader, who was killed by security forces last year. Police are pursuing two other members of the group who remain at large in the jungle.

The suspects arrested over the weekend attended military-style jihadi training in Central Sulawesi, Sufahriadi said. They also supplied weapons and food to militants in the jungle and have hidden information about them from the authorities.

Police seized a revolver, 10 air guns, an arrow and 26 machetes in the raids and were interrogating the suspects, Sufahriadi said.

Indonesia, the world’s most populous Muslim-majority nation, launched a crackdown on militants following bombings on the resort island of Bali in 2002 killed 202 people, mostly Western and Asian tourists.

Militant attacks on foreigners in Indonesia have been largely replaced in recent years by smaller, less deadly strikes targeting the government, mainly police and anti-terrorism forces, and people militants consider to be infidels, inspired by Islamic State group tactics abroad. 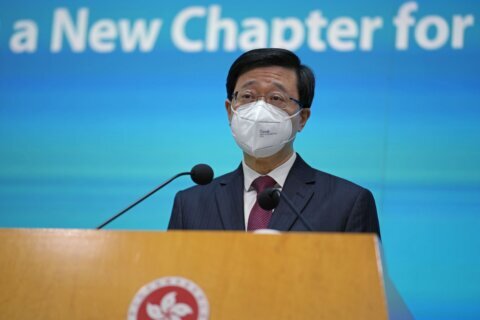