GENEVA (AP) — A Russian official was among the candidates announced Wednesday for the International Skating Union’s elections in June, if he is allowed to stand to retain his place as a vice president.

Alexander Kakernik would be up against opponents from Canada, Finland and Japan if he is allowed to run. Member federations at the meetings from June 6-10 are expected to vote to bar candidates from Russia and Belarus because of the war in Ukraine.

Two members of the ISU’s ruling council, Patricia St. Peter of the United States and Kim Jae-youl of South Korea, are running to replace president Jan Dijkema of the Netherlands, who is standing down after six years. The other candidates are Slobodan Delic of Serbia, a former international speedskater, and Susanna Rahkamo of Finland. Rahkamo is also a candidate to be vice president.

The ISU elections are the first since a Russian doping scandal overshadowed the figure skating competition at the Beijing Olympics in February, followed by more controversy regarding how teenage athletes are treated by their coaches.

The federation, which oversees figure skating and speedskating, has suspended all athletes and hosting rights from Russia and Belarus in international competitions because of the war in Ukraine. It could go further than the IOC and most Olympic sports which have let Russian officials continue in senior positions.

The ISU congress, which is scheduled to be held in Phuket, Thailand, is also expected to raise the age limit to 17 for international figure skating competitions.

A move to raise the age limit was already in place because of technical skating reasons before the Olympics fueled concerns about how the Russian team, and coach Eteri Tutberidze, treated their teenage athletes.

Kamila Valieva, the 15-year-old pre-Olympic favorite, competed under a cloud following a positive doping test belatedly revealed during the Beijing Games. She failed to get a medal after a mistake-filled program and was greeted with little sympathy by her coach.

Later in Beijing, IOC president Thomas Bach criticized Valieva’s entourage for “a tremendous coldness, it was chilling to see this.”

The ISU is not managing the doping case. It is being investigated in Russia.

In the ISU presidential election, St. Peter said this week she would promote policies to create “an environment that encourages and protects athlete safety and well-being” if elected.

Kim is an executive at Olympic sponsor Samsung who had a senior role in the organizing committee for the 2018 Winter Games in Pyeongchang. 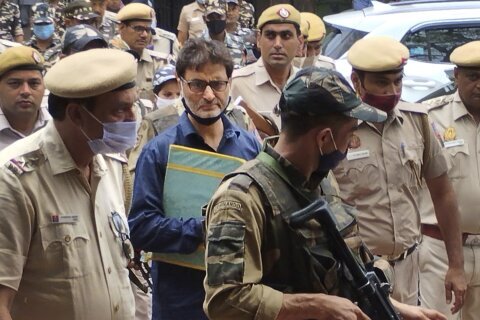