BANGKOK (AP) — Myanmar officials sought Thursday to counter worries over sanctions, energy shortages and currency controls that are adding to the military-led government’s challenges in managing the economy.

Foreign governments and business groups had vehemently protested the Bank of Myanmar’s announcement that foreign currency bank holdings must be converted to kyats within one day of their receipt.

The policy, which added to the formidable risks investors face in doing business in the country, appears aimed at alleviating a shortfall in hard currency following the Feb. 1, 2021, military takeover that ousted the elected government of Aung San Suu Kyi.

The officials also dismissed as a “myth” reports and social media postings suggesting the country may be short of fuel, with long lines of vehicles forming outside service stations in recent days.

However, Aung Naing Oo, the army-installed government’s minister for Investment and Foreign Economic Relations, and Minister of Information Maung Maung Ohn said in a joint statement that recent power outages were caused by surging costs for liquefied natural gas, Myanmar’s weakening currency and by damage to power lines by “terrorist forces” — a reference to armed groups fighting the Myanmar military.

After the army’s takeover, the U.S. and other mostly Western countries imposed targeted sanctions on the military, its leaders and families and army-affiliated businesses, and froze their assets held in those countries.

It’s unclear how severely those measures have impacted the military leadership and its finances.

Myanmar’s economy has slumped amid widespread public resistance to the military takeover and the pandemic. That has in turn kept away tourists, whose spending accounts for a large share of foreign exchange earnings needed to pay for imports of fuel, food and other necessities and to repay foreign debts.

Aung Naing Oo said the central bank’s rule was intended to stabilize the exchange rate after the kyat fell to more than 2,000 to the U.S. dollar. He said the military administration was drawing up “standard operating procedures” on banking transactions but that foreign companies and others qualifying would be given an automatic exemption. That includes businesses operating in Myanmar’s only special economic zone, Thilawa, south of the biggest city, Yangon, he said.

“We are in a transitional period and we are improving ourselves. There will be no more additional burden on foreign companies” due to the new rules, he said.

It’s unclear if the exemptions for foreign entities might provoke an outcry among purely domestic businesses that earn foreign currency.

Earlier the American Chamber of Commerce and British, French and Australian chambers and similar groups said the requirement to swap all dollars and other foreign currencies for kyats would discourage foreign business activity and investment and cause trade tensions.

“Implementation of these measures and the associated lack of clear exemptions for foreign investments creates significant, and for some, insurmountable challenges to all businesses operating in Myanmar,” they said in a joint statement.

Myanmar has been ruled by the military for most of the time since it gained independence from the British in 1948. But for about a decade beginning in 2011, the country began a faltering transition toward democracy and its economy began to take off as it opened further to foreign investment.

Many major foreign businesses have opted to leave, or suspended operations in Myanmar, since the military seized power last year, citing rising risks and a deteriorating business environment, as well as the sanctions.

The statement issued by the ministers said Myanmar had attracted 18 investment projects from China and six from Hong Kong in the first half of the fiscal year that began in October.

“Myanmar is committed to providing a secure, accessible and conducive investment environment. We do not wish to see investment withdrawals,” it said.

This is a “transitional period,” Aung Naing Oo said, “and there will be some difficulties but hopefully all these difficulties and inconveniences will be resolved.”

“We are ready to cooperate with any company from any country,” he said. 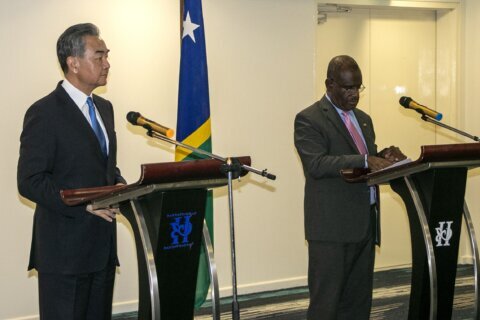