Director of ‘Drive My Car’ surprised by Oscar, popularity

TOKYO (AP) — Japanese director Ryusuke Hamaguchi says he was surprised by the international popularity of his Oscar-winning film “Drive My Car,” but attributes it to the universality of the short story by Haruki Murakami on which it is based.

The movie centers on an actor played by Hidetoshi Nishijima who is directing a multilingual production of Chekhov’s “Uncle Vanya.” Still mourning the sudden loss of his wife, the actor, Kafuku, leads the cast in rehearsals in which they sit and read their lines flatly, ingesting the language for days before acting them out.

“Actually I was surprised by how widely this film has been accepted,” Hamaguchi said at a news conference in Tokyo on Tuesday, his first major event since the Oscar.

While attributing its popularity to the universality of Murakami’s story, Hamaguchi said the actors “put it on the screen in a very convincing way, even though I’m sure it was an extremely challenging task for them to embody Haruki Murakami’s worldview.”

On his part, he tried to “show some sort of hope, as Mr. Haruki Murakami does in his novels, so we can feel this character is now OK — the process of loss and coming to terms with it to move on — if not quite a full recovery,” Hamaguchi said.

The “inner reality” of the characters in the story is both the charm and difficulty of turning Murakami’s story into visuals, Hamaguchi said.

“Describing inner reality … is something movies are not very good at,” Hamaguchi said. So he decided not to trace the written language of the original story. “The more attractive a story is, the harder it is for visuals to surpass the images already formed in the minds of readers,” he said.

Hamaguchi said he decided to visualize the core of the story — the relationship between Kafuku and his much younger driver Misaki — who has also suffered the loss of her mother in a mudslide — which gradually deepens through their conversations in his beloved red Saab, one of few colorful items in the movie.

The film combines the inner worlds of Murakami and Chekhov and reflects their similarities, Hamaguchi said.

Conversations between Kafuku and Misaki contrast with those of Vanya and Sonya in “Uncle Vanya,” and when Kafuku acts as Vanya during the performance, he comes to realize his own inner words toward recovery.

“So I found ‘Drive My Car’ and ‘Uncle Vanya’ wonderfully intertwined as if they translated each other,” Hamaguchi said.

Hamaguchi said he wanted to thank Murakami at the Oscar awards ceremony but missed the chance because his “thank you” after giving a long list of actors’ names was misunderstood as the end of his speech.

“I still wanted to thank Murakami-san and my staff,” he said.

Hamaguchi’s films, which include the anthology “Wheel of Fortune and Fantasy” released last year, are acclaimed, but he was not widely known in Hollywood before an award for best screenplay at last year’s Cannes Film Festival brought attention to “Drive My Car.”

Hamaguchi said international audiences now see Asia as a source of interesting films, and he hopes his fellow filmmakers can create movies that can “pierce through the hearts of audiences” and live up to their expectations.

His goals for his next film? “I just want to be able to say I made one that is a little better than my previous one,” Hamaguchi said. 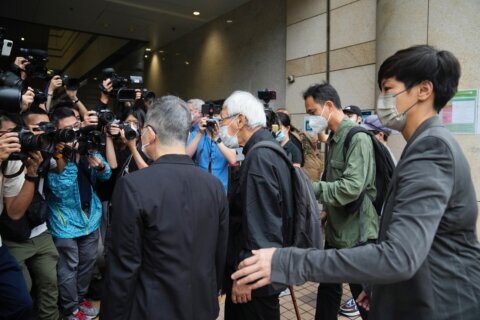