NEW YORK (AP) — Stocks tumbled on Wall Street Friday, leaving the S&P 500 with its biggest one-day loss in almost seven weeks, as worries deepen about a surge in interest rates and the U.S. central bank’s efforts to fight inflation.

The S&P 500 sank 2.8% and marked its third losing week in a row. The Dow Jones Industrial Average slumped 2.8%, its biggest drop in 18 months, after briefly skidding more than 1,000 points. The Nasdaq also had its worst day in nearly seven weeks, closing 2.6% lower.

A day earlier, Wall Street seemed set for healthy gains for the week after American Airlines, Tesla and other big companies reported strong profits or better forecasts for future earnings than analysts expected. Such corporate optimism has helped stocks remain relatively resilient, even as worries swirl about the highest inflation in decades, the war in Ukraine and the coronavirus.

But markets buckled as the chair of the Federal Reserve indicated the central bank may indeed hike short-term interest rates by double the usual amount at upcoming meetings, starting in two weeks.

The Fed has already raised its key overnight rate once, the first such increase since 2018, as it aggressively removes the tremendous aid thrown at the economy through the pandemic. It’s also preparing other moves to put upward pressure on longer-term rates.

By making it more expensive for businesses and households to borrow, the higher rates are meant to slow the economy, which should hopefully halt the worst inflation in generations. But they can also trigger a recession, all while putting downward pressure on most kinds of investments.

“After years of being very accommodative, the Fed has made it clear that policy is going to be tighter for the foreseeable future,” said Brian Price, head of investment management for Commonwealth Financial Network. “Their hawkish stance is giving investors pause as many are left to evaluate the impact on profit margins and (stock) multiples moving forward.”

A preliminary report on Friday indicated the U.S. services industry’s growth is slowing, hurt in particular by surging costs for fuel, wages and other expenses.

Treasury yields have soared as investors prepare for a more aggressive Fed, and stocks have often moved in the opposite direction of them. The yield on the 10-year Treasury slipped to 2.90% from 2.91% late Thursday, but remains close to its highest level since 2018. It began the year at 1.51%.

The two-year Treasury yield, which moves more on expectations for Fed action on short-term rates, has zoomed even more. It was at 2.69% late Friday after more than tripling from 0.73% at the start of the year.

Markets around the world are feeling similar pressure on rates and inflation, particularly in Europe as the war in Ukraine pushes up oil, gas and food costs.

On Wall Street, most stocks fell, including more than 95% of the companies in the S&P 500. Technology and health care companies were among the biggest weights. Apple fell 2.8% and Microsoft dropped 2.4%.

HCA Healthcare slumped 21.8% for the biggest decline in the S&P 500 after reporting weaker earnings per share for the latest quarter than analysts expected. The hospital operator also cut its forecasted ranges for revenue and earnings this year.

Verizon Communications slid 5.6% after it said it expects earnings for the year to fall at the lower end of the range it had previously forecast. The company also reported slightly weaker revenue than expected for the first three months of the year.

Retailer Gap sank 18% after it cut its forecast for sales for the current fiscal quarter and said the CEO of its Old Navy business will leave the company.

The disappointing company earnings and outlooks, plus Powell’s remarks Thursday, have ratcheted up worries for investors already trying to navigate economic uncertainty over the lingering global supply chain issues, the pandemic and the war in Ukraine, said Greg Bassuk, CEO of AXS Investments.

“Looking ahead, that’s putting a sour taste in investors’ mouths around the likelihood of corporate earnings being stronger for the balance of 2022,” he said. 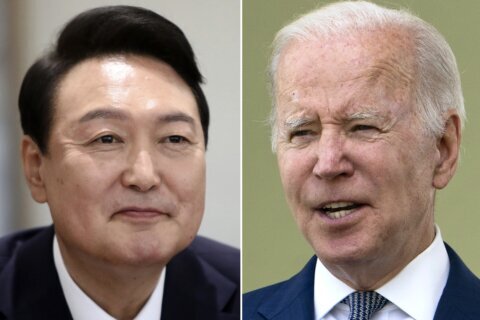 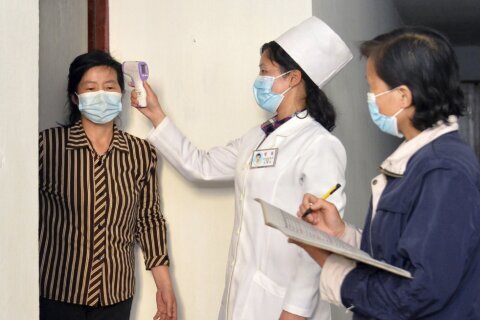