ISLAMABAD (AP) — A rare video has appeared of al-Qaida’s chief praising an Indian Muslim woman who in February defied a ban on wearing the traditional headscarf, or hijab. The footage is the first proof in months that the man who was once Osama bin Laden’s No. 2 is still alive.

Rumors of the death of Ayman al-Zawahri have persistently circulated, but in a video released Tuesday and translated by the SITE Intelligence Group, the reclusive al-Qaida chief praises Muskan Khan who defied a ban on the wearing of the hijab in schools in India’s southwestern state of Karnataka.

Two months ago, Khan garnered attention when she publicly shouted “God Is Great” as Hindu radical students jeered at her over the Islamic headscarf. In March, the court in India’s Karnataka state upheld the ban, outraging civil activists and Muslim groups in India and elsewhere.

A previous video of al-Zawahri, which circulated on the anniversary last year of 9/11, did not reference the Taliban takeover of Afghanistan in mid-August. It did mention the Jan. 1, 2021 attack that targeted Russian troops on the edge of the northern Syrian city of Raqqa.

“He could still be dead, though if so, it would have been at some point in or after Jan 2021,” SITE director Rita Katz tweeted following al-Zawahri’s 9/11 anniversary video.

There was no clear indication from Tuesday’s video of the location of al-Zawahri. He is shown in a traditional white headscarf beside a poster praising “the noble woman of India.”

However, it raises the specter of al-Qaida having a presence in Afghanistan, and highlights concerns over the commitment of the ruling Taliban to fight terror groups and deny them space in Afghanistan.

Al-Zawahri took over as al-Qaida leader after the 2011 killing of bin Laden by U.S. Navy SEALs during a daring nighttime raid deep inside Pakistan where he was hiding. Bin Laden, who masterminded the 9/11 attacks in the United States, was found in the Pakistani garrison town of Abbottabad, barely 100 kilometers (60 miles) from the capital of Islamabad.

Al-Zawahri has been rumored to be in Afghanistan’s northwestern Kunar and Badakhshan provinces on the border with Pakistan. The border region between Pakistan and Afghanistan is lined with inhospitable mountain ranges that have served as redoubts for a number of militant groups.

Amir Rana, executive director of the Pakistan Institute for Peace Studies think tank said that al-Zawahri was also rumored to be in Pakistan’s southern port city of Karachi, where many Taliban leaders long maintained homes during Afghanistan’s 20-year war.

“He was even rumored to have died in Karachi,” said Rana, adding that regardless of his location, al-Zawahri’s video is certain to cause headaches for Afghanistan’s ruling Taliban with the international community.

The Taliban were ousted by a U.S.-led coalition in 2001 for harboring bin Laden. They captured power again in mid-August, during the chaotic last weeks of the U.S. and NATO withdrawal from Afghanistan.

The Taliban say they are adhering to an agreement they signed with the United States in 2020 — before taking power — in which they promised to fight terrorists. And since their takeover, they have repeatedly said Afghanistan would not be used as a launching pad for attacks against other countries. 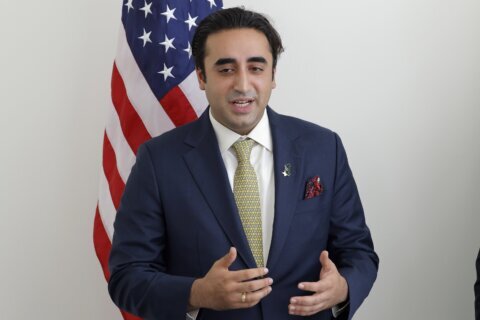