As they adjust to their new communities, Afghan families evacuated to the United States as the Taliban regained power last summer are celebrating Ramadan with gratitude for their safety.
Listen now to WTOP News WTOP.com | Alexa | Google Home | WTOP App | 103.5 FM
(1/14) 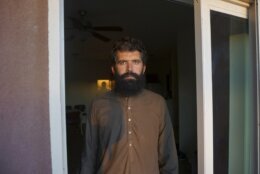 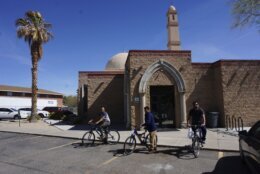 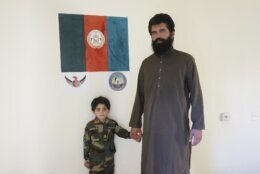 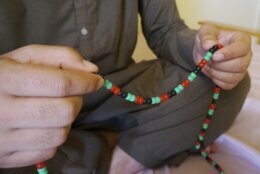 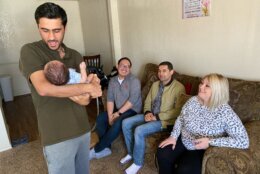 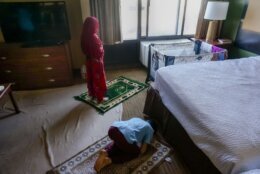 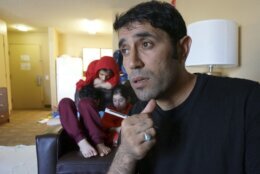 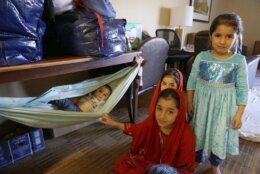 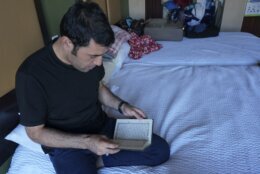 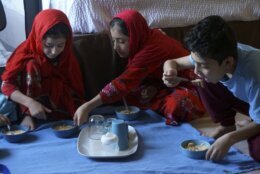 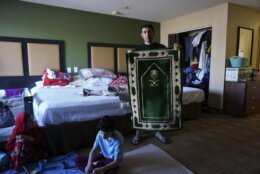 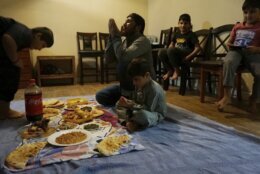 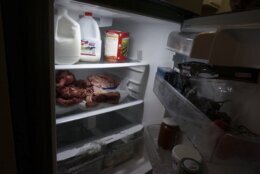 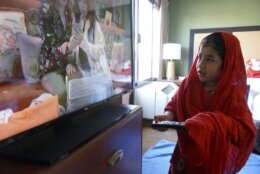 LAS CRUCES, New Mexico (AP) — Sitting cross-legged on the floor as his wife and six children laid plates of fruit on a red cloth in front of him, Wolayat Khan Samadzoi watched through the open balcony door for the sliver of new moon to appear in the cloudless New Mexico sky, where the sun had set beyond a desert mountain.

Then, munching on a date, the bushy-bearded former Afghan soldier broke his first Ramadan fast in the United States – far from the Taliban threat, but also the three dozen relatives he would be marking the start of the Muslim holy month with if he was still home in Khost, Afghanistan.

A few minutes after naan was dipped into bowls of stewed okra and beans, Samadzoi, his wife and the two oldest children retired to worship on their prayer rugs. On Saturday evening, the two-bedroom apartment filled with the murmurs of their invocations.

“I pray for them, and they pray for me, they miss me,” he said of his relatives back home. His cousin Noor Rahman Faqir, who is also now in Las Cruces, translated from Pashto to the simple English he learned working with American forces in Afghanistan.

As they adjust to their new communities, Afghan families evacuated to the United States as the Taliban regained power last summer are celebrating Ramadan with gratitude for their safety. Yet there’s also the agony of being away from loved ones who they fear are in danger under a Taliban leadership crafting increasingly repressive orders.

From metropolitan areas with flourishing Afghan diasporas to this desert university community less than 40 miles (64 kilometers) from the Mexican border, tens of thousands of newly arrived Afghans share one predominant concern that’s amplified in what should be a celebratory time: With only temporary immigration status and low-paying jobs, they feel helpless to take care of their families here and back home.

Abdul Amir Qarizada repeats several times the exact moment, 4:30 p.m., when he was ordered to take off from Kabul’s airport during the chaos of the evacuation – with no time to get his wife and five children, who are still in Afghanistan more than seven months later.

“My concern is the aircraft is safe, but my family is not safe,” the former flight engineer says after Friday prayer at Las Cruces’ only mosque, where he goes by bike to find some “peace.”

So does Qais Sharifi, 28, who says he can’t sleep with worry for his kids left behind, including a daughter born two months after he fled Afghanistan alone.

Both men break into smiles when the mosque’s education director, Rajaa Shindi, an Iraqi-born professor at nearby New Mexico State University, invites them to register for the free iftar dinners held nightly in the meeting hall decorated with gold balloons spelling “Ramadan kareem” — an Arabic greeting often used to wish people a happy Ramadan.

Local congregations like the mosque and El Calvario United Methodist Church in Las Cruces, as well as the Jewish and Christian-based organizations that resettle refugees across their national networks, have been helping Afghans find housing, jobs, English-language classes, and schools for their children.

They decry the fact that most displaced Afghan families don’t have permanent legal status in the United States, despite their services for the U.S. government, military or their Afghan allies during the post-9/11 Afghanistan war. That would give them access to many government benefits and an easier path to work and family reunification.

While Afghanistan’s decades of war and current food shortage mean far less extravagant feasts than in many countries where Ramadan is celebrated, the familiar tastes of home are top of mind for many displaced this year. Qarizada recalls his mother’s signature festive dish of bolani, a stuffed fried bread like a giant samosa.

The mother of Shirkhan Nejat still cries every time the 27-year-old makes a WhatsApp video call home from Oklahoma City, where he was resettled with his wife and the couple’s baby was born. Missing his close-knit extended family at Ramadan brings “bad emotions,” Nejat said, despite his gratitude for being safe.

It’s such bonds, the warmth of large family gatherings around the iftar meal and the cacophony of familiar sights, sounds and smells marking the end of a day’s fast that many are yearning for in America.

In Texas, Dawood Formuli misses his family’s typical pre-iftar routine: His hungry father irritably asking for his food. His mother asking her husband to calm down, and Formuli, 34, telling a joke to lighten the mood and make his father laugh. His children, in another room with their many cousins, sometimes playing, sometimes fighting. “Allahu akbar,” the call to prayer, spilling over from the mosque down the street.

“Every day, it’s like Christmas,” the former translator at the U.S. embassy in Kabul said of past Ramadans in the three-story house his family used to share with his parents, siblings and their families.

In his new apartment in Fort Worth, the call to prayer now comes from an app, not a minaret.

The transition has been especially hard for his pregnant wife, who is still learning English. Yet there are traces of the familiar in their new community: Muslim neighbors, mosques for the special Ramadan prayers, known as “taraweeh,” and halal food markets.

Khial Mohammad Sultani, who the day before Ramadan was still living in an extended stay motel on the outskirts of El Paso, Texas, had to ride nearly 80 miles (128 kilometers) round trip into New Mexico in a taxi to go buy and slaughter a lamb for Ramadan.

The 37-year-old former soldier, his wife Noor Bibi, and their six children broke the second day’s fast with pieces of that lamb stewed in an aromatic sauce around the one table in their duplex, newly built on a barren foothills lot unlike their house in Gardez, with its apple and pomegranate trees.

Right after iftar, four of the children got ready for their first day of school ever the next morning, another new thrill for their parents who never received a formal education.

But when it comes to faith, Sultani will continue to teach his children at home, as his father did for him.

The three oldest children – a boy, 11, and two girls, 9 and 8, with red headscarves loosely arranged over their long braids – pray in turn on a green rug that is among the family’s most treasured possessions.

The family’s Quran came from the military base in New Jersey where they first landed in the United States. But Sultani’s father brought this rug from his pilgrimage at Mecca after another son was killed by the Taliban, a possible fate they escaped, crossing many checkpoints as they fled Afghanistan last summer.

“We are Muslim, and a part of our faith is to thank Allah for everything,” Sultani says in Dari through a volunteer translator. “As appreciation for him, we’re doing this.”