BEIJING (AP) — China is, along with North America and Europe, one of the world’s top three air travel markets. It has dramatically improved safety since a string of deadly crashes in the 1990s and 2000s.

The crash Monday of a China Eastern flight comes after years free of major air disasters. The country has not reported a crash of a commercial flight with more than five fatalities since 2010. The ruling Communist Party’s military wing, the People’s Liberation Army, also has suffered fatal crashes, but few details are available.

China Eastern is, along with Air China, China Southern Airlines and HNA Group, one of four major carriers in China, all state-owned. Founded in 1995, the airline is headquartered at Shanghai’s Pudong International Airport. Its fleet of 749 aircraft includes 291 from the Boeing 737 series, according to its mid-2021 interim report. The carrier has 79,913 employees, mostly in China. It carried 44.3 million passengers in the first half of 2021. China Eastern reported a loss of 5.4 billion yuan ($850 million) in the first half of 2021.

Carriers have suffered heavy financial losses as the government tries to eliminate COVID-19 with a “zero tolerance” strategy that bars most foreign visitors from China and has disrupted travel by suspending access temporarily to major cities. Passenger numbers within China exceeded the United States in 2020 for the first time, according to Boeing Co. That was partly because populous China reopened to domestic travel relatively quickly after the initial coronavirus outbreak. Boeing forecasts 5.4% annual traffic growth and says China should account for one-sixth of future added airline capacity.

State media reported all 737-800s in China Eastern’s fleet were ordered grounded. Aviation experts said it is unusual to ground an entire fleet of planes unless there is evidence of a problem with the model. China has more 737-800s than any other country — nearly 1,200 — and if identical planes at other Chinese airlines are grounded, it “could have a significant impact on domestic travel,” said aviation consultant IBA.

An Embraer ERJ 190-100 operated by Henan Airlines and carrying a total of 96 passengers and crew hit the ground short of the runway on Aug. 24, 2010, while landing in the northeastern city of Yichun. The crash killed 44 people after the fuel caught fire, while 52 people survived. Investigators blamed an error by the pilot, who was landing at night and in reduced visibility.

China Eastern’s last fatal crash was in November 2004, when a bombardier CRJ-200 plunged into a frozen lake just after takeoff from the Inner Mongolian city of Baotou, killing 53 people on board and two on the ground. Regulators blamed ice that had collected on the wings.

China is one of the most important markets for Boeing and its European rival Airbus Industries. They want Chinese carriers to drive sales as U.S. and European demand flatten.

The ruling Communist Party wants to compete with them by making its own jetliners and eventually exporting them.

State-owned COMAC, or the Commercial Aircraft Corp. of China, has released a short-range jetliner, the ARJ21, for up to 105 passengers, and the larger but short-range C919 with up to 190 seats. The company says it is working on a long-range, twin-aisle plane, the C929, for as many as 290 passengers.

This version has corrected the plane that crashed in 2010 carried 96 people and 52 of them survived, not that the 44 who died was the total number on board. 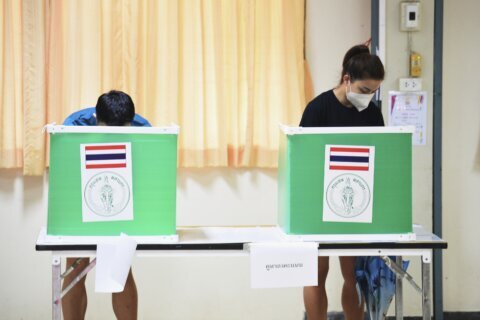 Bangkok votes for governor in 1st election since 2014 coup