AUSTIN, Texas — Texas officials indicated Tuesday that thousands of National Guard members are refusing COVID-19 vaccines in the latest challenge against a Biden administration order that requires all members of the military to get one.

A lawsuit filed by Texas Attorney General Ken Paxton comes a week after a federal judge rejected a similar challenge brought by Oklahoma’s governor, amid growing Republican opposition to the vaccination mandate for Guard members.

Texas has more than 20,000 National Guard members, the largest contingent of any state. About 40% of its Army National Guard are currently refusing to receive the COVID-19 vaccination “for either religious accommodation needs or otherwise,” according to the lawsuit filed in a federal court in East Texas.

It added that more than 200 airmen in the the Texas Guard are also refusing the vaccine.

Other challenges to Defense Secretary Lloyd Austin’s decision to make vaccinations mandatory for all members of the military are playing out elsewhere. On Monday, another federal judge in Texas granted a preliminary injunction stopping the Navy from acting against 35 sailors for refusing on religious grounds to comply with the order.

— How will pandemic end? Omicron clouds forecasts for endgame

— Pentagon chief Austin says he has tested positive for COVID

The Oakland Unified School District said Tuesday that more than 900 students and staff tested positive before the start of school Monday and were currently staying at home as they recovered. About half of the cases were detected by testing at school sites that operated during the holidays and the other half used rapid at-home tests that were distributed to students before and during the break.

“We are pleased to see this testing regimen work the way we hoped it would, keeping sick people at home,” Oakland’s Superintendent Kyla Johnson-Trammell said in a statement.

Sacramento City Unified reported that 500 students and staff were currently quarantining after testing positive for COVID-19 during the winter break. The district said it received about 38,000 test kits in December from the California Department of Public Health, many of which were distributed to students and staff before the winter break. Testing was not mandatory, but school officials asked families who used tests to upload results through the district’s website. Nearly 20,000 results were reported, of which 500 were positive, the district said in a statement.

Both districts serve about 50,000 students each.

Gov. Gavin Newsom had pledged to get rapid tests to all 6 million public school children in California and staff at the state’s 10,000 public schools before classrooms reopened from the winter holiday. Millions of rapid tests did go out before and during the winter break but millions more did not, partly due to delays by winter storms across the country, state health officials said in a statement. More are being delivered this week.

LA PAZ, Mexico — COVID-19 infections are rising across Mexico, especially in two states home to major tourism destinations on the Caribbean Sea and Pacific Ocean that were busy during the holiday season.

According to data from the federal government, Quintana Roo, where tourists flock to Cancun, Tulum and other spots along the Mayan Riviera, and Baja California Sur, which draws beachgoers to the twin Pacific resorts that make up Los Cabos, are both experiencing some of their highest infection totals since the start of the pandemic.

President Andrés Manuel López Obrador said Tuesday that despite the new variant being very contagious, the country was not seeing rising hospitalizations.

Mexico has vaccinated 88% of adults and has started giving a third shot to the elderly as well as health care workers. Teachers will begin receiving the booster in the coming days.

INDIANAPOLIS — The Indiana Department of Health say it has limited who is eligible for rapid COVID-19 tests at state-run sites due to high demand and a surge of cases amid the spread of the omicron variant.

Under new state guidance, rapid antigen tests at state and local health department testing sites will only available to those 18 or younger, regardless of symptoms, or those who are 50 and older, but symptomatic.

The department said the change is necessary “due to the national shortage of rapid antigen tests.”

Health officials said the new protocols will ensure students can stay in school and so residents who are most likely to need a monoclonal antibody can get it within the prescribed window.

DETROIT — Students in the Detroit school district will resume classes at home with laptops, at least through Jan. 14.

The district said Tuesday that online learning is necessary until the city’s COVID-19 infection rates decrease.

The holiday break for more than 40,000 students in the Detroit district will end Thursday.

Michigan’s case numbers have caused many schools to delay the start of January classes or switch to online learning. About 37% of eligible Detroit residents are fully vaccinated against COVID-19, far below the statewide figure.

Detroit-based Henry Ford Health System is “bracing for one of the bleakest months” of the pandemic, said Dr. Dennis Cunningham, director of infection control, citing the likely spread of COVID-19 during holiday gatherings.

Michigan reported an average of 12,200 new daily cases from last Thursday through Monday.

“This pandemic is not slowing down and we are still surging,” Cunningham told reporters Tuesday.

MISSION, Kan. — Kansas health officials warned of a “dangerous moment” as one school district reimposed masks and another eased up on them during a meeting so contentious that the audience was removed.

In the Manhattan-Ogden district, the school board voted Monday to reinstate a districtwide mask mandate, changing a policy that had been in place since Nov. 1 that made masks optional for high schoolers. The board will revisit the decision early next month.

Meanwhile, the board for the 27,000-student Shawnee Mission school district narrowly voted to allow a mask-optional policy to take effect for middle- and high-schoolers when classes resume Wednesday. The crowd interrupted so frequently that the board president twice shut the meeting down before kicking out the audience.

Superintendent Michelle Hubbard described the contentiousness of the meeting in a briefing Tuesday as “disappointing, to say the least” and noted that the board has been under tremendous pressure.

Hubbard said the district started the academic year 250 employees short and has struggled to find enough bus drivers, food service workers and substitute teachers. She said the situation is expected to get worse as omicron takes hold.

OMAHA, Neb. — The meat processing industry, which was hit hard by the spread of COVID-19 early in the pandemic, has weathered the recent surge in virus cases across the country without cutting production.

The latest numbers from the U.S. Department of Agriculture show beef and pork production running close to last year’s levels. And a spokeswoman for the North American Meat Institute said the trade group isn’t aware of any significant production problems across the industry.

At the height of the outbreaks in the spring of 2020, U.S. meatpacking production fell to about 60% of normal as several major plants were forced to temporarily close for deep cleaning and safety upgrades or operated at slower speeds because so many workers became ill or had to quarantine. In October, a congressional report said at least 59,000 meatpacking workers at the five largest companies became ill with the virus and at least 269 workers died.

The major meat processors say their efforts to get workers vaccinated, combined with the safety measures they took after the initial outbreaks, have helped limit the spread of COVID-19 in their plants. Tyson Foods remains the only major company to require all of its workers to get vaccinated while the other giant firms have strongly encouraged the shots and offered bonuses to workers who get them.

The Centers for Disease Control and Prevention posted its newest estimates Tuesday. The CDC uses genomic surveillance data to make projections about which versions of the COVID-19 viruses are causing the most new infections.

The latest estimates suggest a dramatic swing — in just one month — in which version of the coronavirus is most abundant. Beginning in late June, the delta variant was the main version causing U.S. infections. The CDC said more than 99.5% of coronaviruses were delta as recently as the end of November.

The CDC’s estimates are based on coronavirus specimens collected each week through university and commercial laboratories and state and local health departments. Scientists analyze their genetic sequences to determine which versions of the COVID-19 viruses are most abundant.

However, those specimens represent just a small fraction of what’s out there. More than 2.2 million cases were reported in the last week in the U.S. The CDC has been revising estimates for past weeks as it gets more data.

SAN FRANCISCO — In San Francisco, the average seven-day number of new reported infections has climbed steeply to 829, which is more than double that of last winter’s peak of 373 cases a day.

But the mayor of the city, which has had among the strictest public health protections against the virus and lowest infection and death numbers in the country, was upbeat Tuesday about the city’s ability to weather the current omicron-driven surge, saying San Francisco had sufficient hospital beds.

Still, London Breed urged residents to get vaccinated or boosted if they have not done so and to limit time in crowded, indoor spaces. She noted that staffing remains an issue given the speed with which the variant spreads. Currently, there are about 400 workers in police, fire and transportation who need to quarantine due to exposure and many more who can’t work due to other COVID-related complications, such as child care.

ANKARA, Turkey — The number of confirmed daily COVID-19 cases in Turkey has exceeded 50,000 for the first time since mid-April, according to Health Ministry data.

Health Minister Fahrettin Koca said on Twitter that Istanbul, where the omicron variant was spreading rapidly, accounted for more than half of the cases reported on Tuesday.

Turkey is urging people to continue to wear masks and to practice social distancing, but is so far not considering introducing restrictions.

Around 83% of the adult population has received two doses of COVID-19 vaccines and 20 million people have received a booster shot. More than 82,000 people have died of the virus.

The French government is straining to avoid a new economically damaging lockdown, and is instead trying to rush a vaccine pass bill through parliament in hopes that it is enough to protect hospitals.

But with Europe’s highest number of confirmed daily virus cases, after weeks of record-breaking figures, France is in an increasingly challenging position. France’s average daily case load has more than doubled in a week, with an overall current infection rate of more than 1,671 people out of 100,000 over the past week.

More than 20,000 people are hospitalized with the virus in France, a number that has been rising steadily for weeks but not as sharply as the infection rates.

COVID-19 patients fill more than 72% of France’s ICU beds, and a once-renowned health care system is again showing signs of strain. Most virus patients in ICUs are not vaccinated, though 77% of the population has had at least two doses.

The findings echo previous studies and are in a Centers for Disease Control and Prevention report on 46,000 pregnant women, including 10,000 who received at least one vaccine dose while pregnant.

Premature birth rates — about 7 per 100 births — were comparable in both groups, as were rates for small babies, 8 per 100 births.

The data, from December 2020 through late July, suggest there’s no increased risk for women vaccinated early in pregnancy although the authors note that most women included got shots during the second and third trimesters. 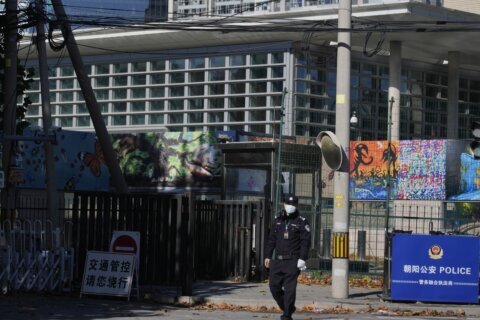 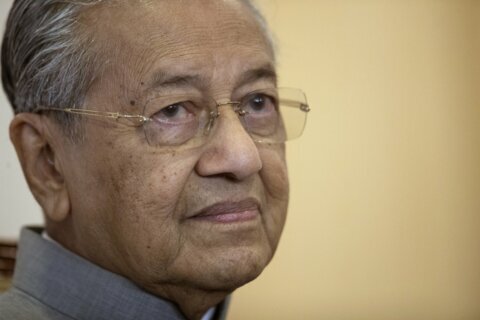