BEIJING (AP) — Renowned Chinese filmmaker Zhang Yimou is promising a simpler opening ceremony for next month’s Beijing Winter Games with a bold and unprecedented way of lighting the Olympic flame.

Zhang, who directed an awe-inspiring opening ceremony for the Summer Olympics in Beijing in 2008, is returning in the same role for the 2022 Games, Chinese state media reported late Friday.

He told the official Xinhua News Agency that his team has come up with a bold idea for the lighting of the flame and the design of the cauldron that is in line with environmental protection and low-carbon emissions.

“I think it’s totally innovative and people will be surprised,” he was quoted by Xinhua as saying.

The Feb. 4 ceremony will have 3,000 performers, a sharp drop from 15,000 in 2008, and last less than 100 minutes because of the cold weather and the COVID-19 pandemic, Xinhua said. It will be held at the “Bird’s Nest” National Stadium, the same wavy, latticed structure used for the 2008 Games.

Zhang told Xinhua that the theme of the ceremony will be different, saying that times have changed and the world needs a new vision in the wake of the pandemic.

“In 2008, the Olympics was a brilliant stage and chance for our country to show ourselves,” he said. “It’s different now. China’s status in the world, the image of the Chinese, and the rise of our national status, everything is totally different now.”

Zhang, who is about 70 years old, directed three films nominated for Best Foreign Language Film at the Academy Awards including “Ju Dou” in 1990, “Raise the Red Lantern” in 1991 and “Hero” in 2003. 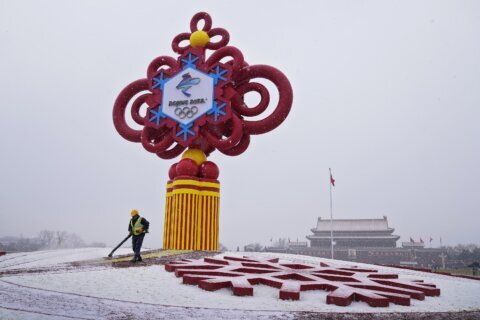