Make room on the podium for countries other than the Netherlands at the speedskating oval in Beijing. The Dutch typically…
Listen now to WTOP News WTOP.com | Alexa | Google Home | WTOP App | 103.5 FM

Make room on the podium for countries other than the Netherlands at the speedskating oval in Beijing.

The Dutch typically dominate in their national sport — winning seven golds and 16 medals overall four years ago — but this time the medals figure to be more evenly spread around. Host China, Japan, Canada, the Russian Olympic Committee, the United States and even Italy are in the mix.

The men’s 1,000 meters seems likely to belong to the Dutch, with favorites Thomas Krol and defending champion Kjeld Nuis vying for gold.

But without foreign fans allowed in the venues, the clapping and singing orange-clad Dutch fans will be missing. So will the sport’s Dutch pep band, Kleintje Pils, which has a tradition of creating a party atmosphere at the Olympic oval.

Japan has medal contenders on the men’s and women’s side, including sprinters Wataru Morishige and Tatsuya Shinhama and defending women’s 500 champion Nao Kodaira and three-time medalist Miho Takagi.

The bumping, drafting and strategy of the mass start returns after making its debut four years ago. Up to 24 skaters race 16 laps, with intermediate sprints thrown in. Skaters from the same countries sometimes work together to thwart the competition.

Speedskating begins Feb. 5 with the women’s 3,000 meters at the Ice Ribbon. It’s the only newly built arena in the Olympic Park located on the former archery and field hockey fields used in the 2008 games. Formally known as the National Speed Skating Oval, the exterior features 22 ribbon-like light strands flowing around it. After the games, it will open to the general public.

The most successful U.S. Winter Olympic sport has won just one medal since 2010. But the Americans have a chance to claim a handful in Beijing. Erin Jackson is the favorite to win the 500 meters and Brittany Bowe is a similar threat in the 1,000. She could also make the podium in the 1,500. No American woman has won an individual medal since 2002. On the men’s side, Joey Mantia is the gold-medal favorite in the 1,500 and his veteran presence guides the U.S. as a favorite in the team pursuit. Jackson, Bowe and Mantia are former inline skaters from Ocala, Florida. Jackson slipped at the U.S. trials and failed to make the team in the 500, but Bowe gave up her Olympic berth in the event so Jackson could compete in her second Olympics.

Keep an eye on Jordan Stolz. The skater from Wisconsin is the youngest U.S. Olympic speedskater, joining Eric Heiden and Emery Lehman, who also were 17 at their first games. Stolz won the 500 and 1,000 at the trials to earn his spot. Four-time Olympic medalist Shani Davis coached Stolz when he was 14. “He’s given me a lot of advice just to stay relaxed and focus on the technique,” Stolz said. “Everything I’ve done wrong he’s done before.”

At 49, Claudia Pechstein of Germany will be the oldest woman to compete at a Winter Olympics and the second athlete — and only woman — to compete in eight. She qualified in the mass start. Her career includes nine Olympic medals and a two-year doping ban, which she continues to fight in court. Pechstein will tie Japanese ski jumper Noriaki Kasai for participating in the most Winter Games.

Sven Kramer of the Netherlands skates in his fifth and final games. The 35-year-old is a nine-time Olympic medalist and the defending champion in the 5k, the only male speedskater to win the same event three times.

Francesca Lollobrigida of Italy is back for her third Olympics. Her best finish came four years ago, taking seventh in the mass start, where she’s now ranked second in the world. She is the great-niece of 94-year-old actress Gina Lollobrigida, who was an international star in the 1950s and ’60s. 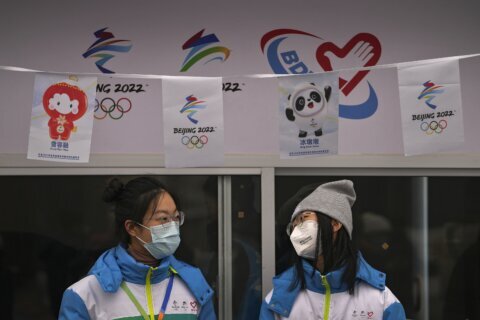