TORONTO — Bars, restaurants, stores and entertainment venues across the Canadian province of Quebec will be required to operate at 50% capacity because of the omicron variant of the coronavirus.

Churches and other faith venues will also must keep at half capacity and worshippers will have to show proof of vaccination. Parties at work are banned along with dancing and singing karaoke inside bars, clubs and restaurants.

— Vaccine skeptics in Eastern Europe having change of heart

— US sports leagues cope with COVID-19 outbreaks amid variants

CHARLESTON, W.Va. — West Virginia health officials say the state’s first case of the omicron variant of the coronavirus has been reported in an unvaccinated resident in Marion County.

The state Department of Health and Human Resources said Thursday it would provide no further information to protect the patient’s confidentiality.

Active cases of the coronavirus statewide have nearly doubled in the past three weeks to more than 8,700. The number of people hospitalized statewide for the virus also has been increasing this month and was at 623 Thursday.

There have been 5,142 virus-related deaths in the state since the start of the pandemic.

CONCORD, N.H. — New Hampshire’s governor has announced another “booster blitz” for Jan. 8, aiming to give out about 10,000 coronavirus vaccine shots. The first one was held Dec. 11.

Gov. Chris Sununu also said Thursday that New Hampshire plans to increase the number of walk-in sites for vaccine shots from four to 10.

Sununu adds that residents will again be allowed to order free, rapid cirus test kits that can be administered at home through the “Say Yes to the Test” campaign.

The state partnered with the federal government to deliver 800,000 tests last month. They ran out of supplies in a day.

KANSAS CITY, Mo. — Kansas has confirmed its first case of the omicron variant, raising fresh concerns as hospitals already were seeing a rise in COVID-19 patients.

The Kansas Department of Health and Environment said in a news release Thursday that the infected person is a vaccinated adult in Franklin County in the northeast part of the state. The person had not received a booster.

The announcement comes as the state’s seven-day rolling average of daily new coronavirus cases has risen over the past two weeks from 1,340.29 on Nov. 30 to 1,594.43 on Tuesday, according to data from Johns Hopkins University. Deaths also rose over that period to 18.4 per day from 5.14.

OMAHA, Neb.: The current surge in virus cases in Nebraska is putting stress on the state’s health care system.

Health officials said Thursday that they are already concerned about hospital capacity, and the spread of the contagious new omicron variant of the virus could make the situation worse. Nebraska confirmed six cases of the omicron variant earlier this month, and state epidemiologist Dr. Matthew Donahue said one new possible case was being investigated Thursday.

Infectious disease expert Dr. Angela Hewlett said hospitals may soon have to ration care to patients by imposing what doctors call crisis standards of care because doctors and nurses are spread so thin.

JOHANNESBURG – Tourism officials in South Africa have denounced new travel restrictions imposed by France because of the surge in omicron variant infections, saying the country feels discriminated against.

Steve Motale, a spokesman for South Africa’s Department of Tourism, said the French government restrictions appear to be aimed at discouraging people from traveling from France to South Africa, since they will face a long and costly quarantine after their return.

“It is unfortunate that once again South Africa seems to be discriminated against with no scientific basis,” Motale told the AP Thursday. Mandatory quarantine and additional resources for PCR tests make South Africa an unattractive travel destination, he said.

DETROIT — Michigan is in a “crisis” due to COVID-19, according to Bob Riney, chief operating officer at Henry Ford Health System in Detroit.

Henry Ford hospitals in southeastern Michigan had about 500 COVID-19 patients Wednesday, 80% of them unvaccinated.

“There’s no way to sugarcoat it,” Riney said. “On any given day, our emergency departments are either at capacity or close to it, and often times serving as inpatient units because we don’t have beds available in our standard inpatient units or ICUs.”

JOHANNESBURG — Amid fast-rising numbers of new COVID-19 infections, South African officials are urging people to get vaccinated before traveling for the holidays and attending festive gatherings.

South Africa’s daily new confirmed cases climbed to more than 26,900 on Wednesday and 24,700 on Thursday, the highest yet in the new wave driven by the omicron variant — and reaching the peak of an earlier surge in June and July caused by delta.

ORLANDO, Fla. — Wastewater samples show that the new omicron variant is now the dominant strain of the coronavirus in the Florida county that is home to America’s largest theme park resorts, officials said this week.

Even though the county has almost no confirmed cases involving omicron, a sampling this week showed the variant represented almost 100% of the coronavirus strains in the wastewater facility samples, Orange County Utilities spokesperson Sarah Lux said in an email.

U.K. officials have said the omicron variant of the coronavirus is spreading at an “absolutely phenomenal pace,” with case numbers doubling every two to three days.

The U.K. Health Security Agency said another 1,691 omicron cases have been identified in the country, bringing the total to 11,708, though scientists warn the number is likely to be much higher.

LONDON — England’s chief medical officer says it’s possible that daily hospital admissions from COVID-19 this winter will surpass the previous peak numbers, though he cautioned that “huge uncertainties” remain about the omicron variant.

In testimony before the House of Commons Health and Social Care Committee, Professor Chris Whitty said he expects the highly transmissible omicron variant to drive a rapid increase in infections, which could push hospitalizations above the daily record of 4,583 recorded on Jan. 12.

“We’re talking about huge uncertainties, so I don’t want this to be seen as saying this will happen; I’m just saying there’s a range of possibilities,” Whitty said. “You could have a higher number than that going into hospital on a single day. That is entirely possible. It may be less than that, but it’s certainly possible.”

BERLIN — Germany is scrambling to procure more vaccines to fuel what the new health minister on Thursday called a “very offensive” and fast booster strategy that would leave the country better prepared for the onslaught of the new omicron variant.

Germany on Wednesday administered nearly 1.5 million shots, its highest one-day total so far. As its vaccination campaign has revved back up, an average of some 988,000 people per day have been vaccinated over the past week.

The proportion of Germany’s population of 83 million that has been fully vaccinated now stands at 70% — below the official minimum target of 75%. And 27.6% also have received a booster shot, a figure that is rising quickly.

Health Minister Karl Lauterbach said that “we will try with a very offensive, fast booster strategy to keep the omicron variant as small as possible to avoid overloading the health system and possibly society as a whole.”

PARIS — Wealthy countries will have a surplus of nearly 1.4 billion doses of coronavirus vaccine by March 2022, according to predictions by the analysis firm Airfinity.

It wasn’t clear how much of the estimated surplus would be absorbed if all the countries decided to give booster shots to protect their populations against the omicron variant.

Airfinity prepared the forecast for the International Federation of Pharmaceutical Manufacturers & Associations, which denied Thursday that there was a lack of vaccines for the developing world.

The Geneva-based industry group said the problem was a combination of hoarding by wealthy nations and an inability to carry out vaccinations in poorer countries.

The head of vaccine alliance Gavi, which is leading a U.N.-backed push to get COVID-19 vaccines to developing countries, said this week he’s seen early signs of rich countries withholding donations due to fears about omicron. He warned any new hoarding could lead to “Inequity 2.0.”

Of the roughly 10 billion doses that have been delivered worldwide, the vast majority have gone to rich countries. COVAX has delivered just over 720 million.

ST. PAUL, Minn. — A coronavirus pandemic wave caused by the fast-spreading delta variant has quickened the death toll in Minnesota, where more than 10,000 have died of COVID-19.

Even as the death toll climbed, Minnesota has the 38th lowest rate of COVID-19 mortality among states since the start of the pandemic.

MADRID — Health workers in Spain’s Balearic Islands will need to show a certificate proving they are vaccinated against the coronavirus or provide three negative COVID-19 tests per week if they don’t want to lose their jobs or salary.

The Balearic Islands’ High Court on Thursday greenlighted the new regulation by the regional government of the Mediterranean archipelago — a popular tourist destination that includes Mallorca and Ibiza.

Forcing the unvaccinated to take periodical tests amounted to limiting their fundamental rights, but the measure was necessary because health workers are legally obliged to prevent illnesses, the judges said in their decision.

Spaniards have displayed strong vaccination acceptance, leading to nearly 90% of residents aged 12 or older being double-vaccinated.

This week, the country started rolling out vaccine shots for 3.3 million children aged between 5 and 11.

LONDON — England’s chief medical officer says the U.K. government may have to consider a tougher response to the wave of COVID-19 sweeping the country if vaccines prove less effective than anticipated against the new omicron variant.

In testimony to a parliamentary committee Thursday, Professor Chris Whitty said scientists won’t fully understand how well vaccines work against omicron until they’ve conducted clinical studies on patients infected with the variant. Data from those studies aren’t expected until the last week of December at the earliest.

The government this week rolled out an accelerated vaccine program that aims to offer everyone over the age of 18 a booster shot by the end of the year.

It has also implemented new rules ordering masks to be worn in most indoor settings in England and requiring proof of vaccination or a negative COVID-19 test to enter nightclubs and large events.

BRUSSELS — European Union leaders have agreed that administering booster shots is “urgent” and “crucial” to tackle the surge of coronavirus infections across the continent and the emergence of the new omicron variant.

With the festive season looming, the bloc’s leaders also stressed Thursday the importance of coordinated action to avoid a confusing cacophony of rules in the 27 member states, and ensure that COVID-19 certificates continue to guarantee unrestricted travel.

In their summit’s conclusions, leaders gathered in Brussels insisted on the need for a harmonized approach to avoid limitations to free movement between member countries or hamper travel into the region. 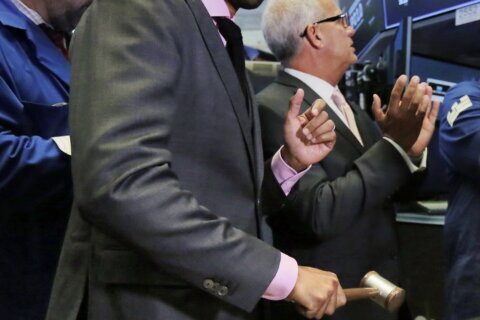 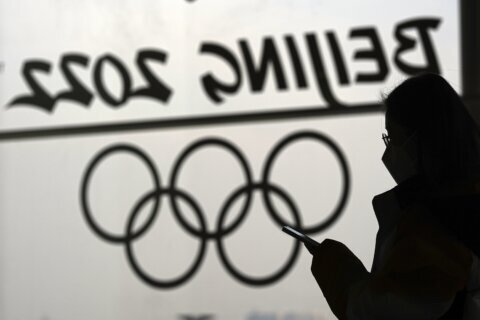