TOKYO (AP) — Asian shares were mixed Thursday, after a worrisome report on U.S. inflation that slammed into the bond market and knocked stocks lower on Wall Street.

A recent regulatory crackdown in China has weighed on technology issues, but some stocks are recovering as some investors start to feel the selloff may have been overdone.

“Sentiments may be expected to remain capped by the negative lead in Wall Street overnight, with market participants taking some risks off the market while awaiting reassurances on monetary policy stance,” said Yeap Jun Rong, market strategist at IG in Singapore.

In the U.S., prices for beef, electricity and other items that consumers paid in October surged from year-ago levels at the fastest overall pace since 1990, raising expectations that the Federal Reserve will have to hike short-term interest rates more quickly off their record low. That sent Treasury yields to their biggest gains in months.

The two-year Treasury yield tends to move with expectations for Fed action, and it leaped to 0.51% from 0.41% late Tuesday, a significant move.

Longer-term Treasury yields also rose, with the 10-year yield up to 1.55% early Thursday from 1.43% late Wednesday.

Rising yields tend to be a drag on stocks, particularly those seen as the most expensive or whose expectations for big profit growth is furthest in the future. Drops for several high-growth tech stocks weighed on Wall Street, as did a slide in energy stocks following a decline in the price of crude oil.

Pushed by the inflation report, investors are now pricing in a 66.5% chance that the Fed will raise rates by the end of June. A day earlier, that probability was at 50.9%.

The Fed has been keeping overnight rates at a record low of nearly zero since March 2020 to resuscitate markets and the economy from the pandemic. It has already begun to pare back on bond purchases it makes every month to keep longer-term rates low.

Other central banks have mostly kept rates low, though some including New Zealand and Indonesia are already acting to tighten policy.

In the stock market, higher yields tend to favor stocks that look cheap, or at least cheaper than their peers. These are often called “value” stocks to distinguish them from stocks of high-growth companies.

“It’s a fight between growth and value, and neither one is really getting the upper hand lately,” said Tom Martin, senior portfolio manager with Globalt Investments. “You’re going to have a decent market until year end and at some point, you’ll see folks really starting to try to position themselves for what they think 2022 could look like.”

A 3.3% drop in the price of U.S. oil also helped to drag energy stocks to the biggest loss among the 11 sectors that make up the S&P 500.

Tesla regained some of its lost ground from the prior two days after its CEO, Elon Musk, said that he would sell 10% of his stake in the company. It rose 4.3%, though it remains down 12.6% for the week.

Rivian Automotive, an electric truck maker backed by Amazon and Ford, glided 29.1% higher in its first day of trading.

DoorDash rose 11.6% after reporting stronger-than-expected revenue for its latest quarter and announcing that it is buying Finnish delivery service Wolt Enterprises, expanding its reach into Europe and other markets.

In energy trading, benchmark U.S. crude added 18 cents to $81.52 a barrel in electronic trading on the New York Mercantile Exchange. Brent crude, the international standard rose 20 cents to $82.84 a barrel. 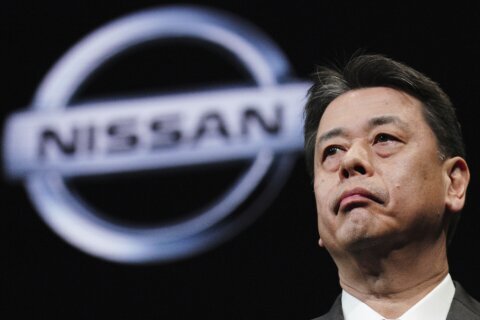