TOKYO (AP) — Shares were mostly lower in Asia on Friday, with Chinese markets weighed down by concerns over property developers.

Benchmarks fell in Shanghai, Hong Kong, Tokyo and Seoul but rose in Sydney and Taipei.

Jitters over troubles in the property sector flared after Kaisa Group, a Chinese developer, announced that Hong Kong-traded shares in its companies were suspended after it failed make payments on wealth products it had guaranteed.

Tightened controls on borrowing by highly leveraged real estate companies have been rattling markets after one of the biggest, Evergrande Group, failed to make payments on some of its debt.

On Thursday, the benchmark S&P 500 rose 0.4% to 4,680.06, extending its winning streak to a sixth day. The index has notched a succession of record-high closes, often on days when the market got off to a downbeat start.

Despite the mixed outcome, the market’s latest milestones underscore how traders remain in a buying mood, encouraged by solid company earnings and by the Federal Reserve’s decision, at least for now, to only slowly begin dialing back policies aimed at spurring U.S. economic growth when it was in the throes of the pandemic recession.

On Wednesday, the Fed said it will begin reducing its $120 billion in monthly bond purchases in the coming weeks by $15 billion a month. The central bank could decide to raise its short-term interest rate, which affects many consumer and business loans, from near zero. Many market watchers concluded that the Fed was moving cautiously in dialing back its support, which is good news for Wall Street.

Moderna sank 17.9% after cutting its forecast for how many vaccine deliveries it expects to make this year. Merck rose 2.1% after British authorities approved its antiviral pill.

Investors received an encouraging update on the employment market’s recovery. The Labor Department reported on Thursday that the number of Americans applying for unemployment benefits fell to another pandemic low last week, another sign the job market is healing after last year’s coronavirus recession. The agency will release its more detailed jobs report for October on Friday.

Benchmark U.S. crude prices picked up 74 cents to $79.55 per barrel in electronic trading on the New York Mercantile Exchange after OPEC and allied oil-producing countries decided to stick with their plan for cautious monthly increases in oil production even as prices surge and the global economy is thirsty for fuel.

The OPEC+ alliance, made up of OPEC members led by the Saudis and non-members led by Russia, rebuffed pressure from U.S. President Joe Biden to pump significantly more oil and lower gasoline prices for U.S. drivers.

Brent crude, the standard for international pricing, rose 62 cents to $81.17 per barrel. 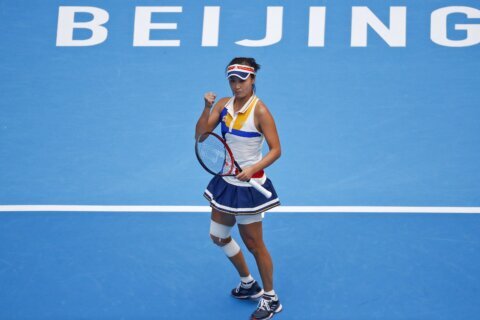