From her home in Illinois, Asma Yawari has built a relationship with her younger cousin in Afghanistan that’s made the…
Listen now to WTOP News WTOP.com | Alexa | Google Home | WTOP App | 103.5 FM

From her home in Illinois, Asma Yawari has built a relationship with her younger cousin in Afghanistan that’s made the geographic distance between the two teenagers’ worlds seem, well, not quite so distant.

They never met but have bonded over phone calls and messages — swapping family photos and language lessons, sharing hair routines and future dreams. But after the Taliban’s return to power, the cousins worry that the space between their worlds may grow in new ways. Already, some shared experiences, like going to school or dressing up, are fading, replaced by the fear that the cousin, and others like her in Afghanistan, may be left behind.

As a wary world watches to see the Taliban’s policies for women, many older girls in Afghanistan already face disrupted dreams, worried for their future, afraid of missing out on big career goals as well as little freedoms and hobbies that helped connect them to far-flung families. And perhaps none are more worried for them than the faraway women who could have been them – the sisters, the cousins, the friends.

The cousin, 13-year-old Bahara, tells Asma she’s upset that boys in her age range have been called back to school, but not girls above the sixth grade. And even if she’s allowed to return, she questions what dreams of hers may no longer have a place under the Taliban.

Her hope of one day becoming a fashion designer? “I’m just going to give up on that,” she says. “It’s very sad for me.”

Asma, who has helped organize protests in Chicago in support of Afghans scrambling to leave the country after the Taliban takeover, worries over the safety of her family in Afghanistan and the future of her female cousins.

“I always think that could have been me,” she says.

The status of Afghan women, at times used to help garner support for the U.S. war after the 9/11 attacks, has once again taken center stage after the recent rise of the Taliban who face international pressure to ensure women’s rights.

During their previous rule between 1996 and 2001, the group severely restricted women in the public sphere, largely confining them to their homes. That track record looms large even as they promise more rights and freedoms this time.

Throughout decades, Afghanistan has been used as grounds for competing powers to play out their proxy wars, and the status of Afghan women is often at the heart of it, says Nura Sediqe, lecturer at the Princeton School of Public and International Affairs at Princeton University.

Changes over the last two decades brought opportunity for the women in Sediqe’s family in Herat province “but then fatalities continued in more rural parts of Afghanistan, so I felt this guilt.”

Some girls and women worked to seize the opportunity of going to school and getting a job; others faced social and economic burdens holding them back, she says.

In bigger cities, like Kabul, women may have more visibility and rights than in the many rural areas of the vast country.

Girls’ education has been a battlefield with uneven progress.

Even before the recent Taliban takeover, multiple barriers — including cultural norms, familial disapproval, security fears, financial pressures, the long distance to some schools and shortages of female teachers — have kept significantly more girls than boys out of school, especially when the girls reach adolescence, according to a 2019 UNICEF report.

Still, UNICEF Deputy Executive Director Omar Abdi told reporters that the number of children enrolled in schools increased from one million in 2001, when the Taliban were ousted from power, to almost 10 million, including 4 million girls. Despite this progress, 4.2 million children are out of school, including 2.6 million girls, he said.

“The education gains of the past two decades must be strengthened and not rolled back,” said Abdi, who added he urged the Taliban to let all girls resume learning.

Speaking in mid October, he said girls were allowed to attend secondary school in only five of Afghanistan’s provinces. Taliban’s education minister, Abdi said, told him they were working on “a framework which they will announce soon” that will allow all girls to go to secondary schools.

The Taliban have sought to portray themselves as more moderate than when they imposed their harsh interpretation of Islamic law during their earlier rule, but many Afghans are skeptical.

The Taliban is “taking their personal, unique interpretation of Islamic law and fusing it with their cultural understanding of women’s rights and women’s access to the public sphere,” says Ali A. Olomi, an assistant professor of Islamic and Middle East history at Penn State University, Abington, stressing that Islam strongly encourages education.

Masouma Tajik worries her younger sisters may not have access to the same opportunities that have allowed her to become a data analyst in Kabul.

The 22-year-old, career-minded Tajik graduated from the American University of Afghanistan, where she studied on a scholarship.

She recalls feeling scared shortly before the Taliban seized Kabul. “The first reason that I was afraid was my right to live as a woman,” she says. “I put so much time and effort on my career.”

After the Taliban takeover, Tajik left Afghanistan for Eastern Europe. She’s been applying for scholarships or refugee programs in different countries.

Her sisters stayed behind in Herat with the rest of the family.

One of her sisters’ answers became shorter when they talked: No, she doesn’t go to school (their youngest sister does). The sister, who used to tell Tajik that she wanted to join the army, didn’t complain but her voice betrayed her sadness, Tajik says. More recently, that sister started sharing that she has been going out, including to the park, and studying English at home.

Tajik has no idea how to help; her own life is in limbo.

“I’m just like giving hope for them,” Tajik says. “I have nothing, no plan in my hands for them. She understands this.”

Nazia, 30, is also missing a younger sister who is in Afghanistan. The two were separated two years ago, when Nazia moved to America and Hena remained in Kabul.

Hena is growing hopeless about what the future holds.

At times, Nazia, who didn’t want her last name used to protect the identity of relatives in Afghanistan, tries to cheer her up; at others, she joins her in crying.

Since she was a child, Hena has dreamed of becoming a doctor.

“Everything has been taken away from us,” she says, speaking on Zoom as Nazia translates. She helps her mom with chores at home and, sometimes, reads her textbooks, unsure whether or when she will be able to use them in a classroom again.

And Nazia feels helpless: “I can’t do anything for them.”

In Afghanistan, Bahara says she had been counting the days since boys beyond the sixth grade have been allowed back to school, but not the girls.

Before, time would fly by as she juggled going to her school and doing her homework with taking outside courses in English and her favorite hobby — sewing.

She scoured Instagram for fashion design inspiration; her family felt it would be inappropriate for her to post photos of herself, but she could browse. Her mother gave her a sewing machine and she made dresses for herself and her sisters.

Now, her world has shrunk. A close friend with whom she had planned a fashion design project left the country. The courses she used to take are no longer meeting. She tries to keep a low profile, wearing a loose, long black gown when she goes out and a tightly wrapped black headscarf that frames her face; she deleted from her phone cherished photos of herself wearing dresses she made.

A sister says she doesn’t want to return to school even if allowed back, worried about potential Taliban harassment, Bahara says; but not her.

“I miss my teachers, my books, my friends,” she says. “I wake up every day and when I see the clock, I think that that was the time that I should be in school.”

Bahara’s family is among the many who are hoping to leave the country for multiple reasons.

Talking or texting with her cousin Asma provides some relief.

Bahara holds onto the good memories, like her birthday party, shortly before Kabul fell to the Taliban. She didn’t have anything to wear. “In one night, I tailored a beautiful dress.”

In her new dress, surrounded by childhood girlfriends, she laughed, played games and blew out the candles.

“I think that was the last day for me that I was happy,” she says. “After that … there is no day to spend without worries.”

Meanwhile, Asma recently attended her school’s homecoming, but hesitated before posting photos online of herself, dolled up in a sparkling baby blue dress and posing with friends. She didn’t want her cousin or other family to think she was flaunting her freedom.

“If I do go hang out with my friends, I feel guilty,” she says. “I just feel guilty, like, talking about it.” 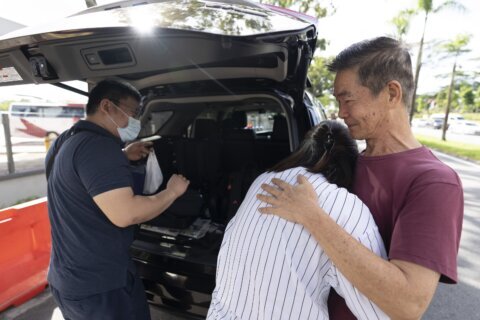