The United States and China are stepping up their war of words over Taiwan in a long-simmering dispute that has significant implications for the power dynamic in the Indo-Pacific and beyond.
Listen now to WTOP News WTOP.com | Alexa | Google Home | WTOP App | 103.5 FM

WASHINGTON (AP) — The United States and China are stepping up their war of words over Taiwan in a long-simmering dispute that has significant implications for the power dynamic in the Indo-Pacific and beyond.

Amid a surge in Chinese military activity near the island that China regards as a renegade province and has vowed to reclaim by force if necessary, Washington and Beijing have launched new campaigns for global support for their respective positions, each using the stern and lofty language of sovereignty and international precedent. And neither is backing down.

While the disagreement over Taiwan isn’t new and has long vexed relations between the countries, recent developments suggest the two are coming closer to confrontation. Last week, President Joe Biden set off alarm bells in Beijing by saying the U.S. has a firm commitment to help Taiwan defend itself in the event of a Chinese attack.

China protested and the Biden administration sought to play down the comments. White House, State Department and Pentagon officials all said the president did not mean to imply any changes in the U.S. “one-China policy,” which recognizes Beijing but allows informal relations and defense ties with Taipei.

The officials took pains to say that America’s commitment to Taiwan remains steadfast but continues to be guided by a policy of “strategic ambiguity” over military-related specifics that falls short of a treaty-enshrined mutual defense pact. Since then, however, the administration has upped the ante on the diplomatic front.

Secretary of State Antony Blinken on Tuesday publicly urged other members of the United Nations to reject China’s assertion of absolute sovereignty over Taiwan and join the U.S. in supporting Taipei’s independent participation in international organizations related to transportation, health, climate change, culture and education.

“As the international community faces an unprecedented number of complex and global issues, it is critical for all stakeholders to help address these problems,” Blinken said in a statement. “This includes the 24 million people who live in Taiwan. Taiwan’s meaningful participation in the UN system is not a political issue, but a pragmatic one.”

“Taiwan’s exclusion undermines the important work of the UN and its related bodies, all of which stand to benefit greatly from its contributions,” Blinken said. “That is why we encourage all UN Member States to join us in supporting Taiwan’s robust, meaningful participation throughout the UN system and in the international community.”

State Department spokesman Ned Price declined to elaborate on what the administration would define as “meaningful participation.”

Blinken’s statement came just five days after Biden’s remarks about Taiwan’s defense and only two days after the State Department announced that senior U.S. and Taiwanese officials met virtually to discuss expanding Taiwan’s participation in UN and other international groupings.

In that Oct. 22 meeting, administration officials “reiterated the U.S. commitment to Taiwan’s meaningful participation at the World Health Organization and UN Framework Convention on Climate Change and discussed ways to highlight Taiwan’s ability to contribute to efforts on a wide range of issues,” the State Department said.

Apart from complaining about Biden’s initial comments, China reacted angrily to that discussion, slamming the administration for making “irresponsible statements” that encourage Taiwanese independence and demanding a halt to U.S. “official contacts” with the island’s government.

“Taiwan’s participation in activities of the international organizations must be handled in accordance with the one-China principle,” foreign ministry spokesman Wang Wenbin said. “Taiwan’s attempts to expand its so-called ‘international space’ with foreign support are in nature seeking to expand the space for ‘Taiwan independence’ and secession. It will surely end in failure.”

The back-and-forth is playing out against a backdrop of increasing belligerence by both sides toward the other, even as they profess to have common interests on issues ranging from trade to climate to North Korea. Relations have plunged to new lows since nosediving under the Trump administration, which adopted a confrontational approach on trade, visas, diplomatic representation and educational exchanges.

While both former President Donald Trump and President Joe Biden have been firm in their opposition to Chinese activities in Tibet, Hong Kong, China’s western Xinjiang region and the South China Sea, the Taiwan issue pre-dates most of those irritants.

China has recently upped its threat to bring Taiwan under its control by force if necessary by flying warplanes near the island and rehearsing beach landings.

China and Taiwan split during a civil war in 1949. The U.S. cut formal diplomatic relations with Taipei in 1979 in order to recognize Beijing. The U.S. does not openly contest China’s claim to Taiwan, but is committed by law to ensure the island can defend itself and to treat all threats toward it as matters of grave concern.

Under President Xi Jinping, who is also Communist Party leader and head of the armed forces, China has been stepping up military, diplomatic and economic pressure on Taiwan. Over its National Day weekend at the beginning of the month, China sent a record 149 military aircraft southwest of Taiwan in strike group formations, prompting Taiwan to scramble aircraft and activate its air defense missile systems.

China has also recently held beach landing exercises on its side of the roughly 160-kilometer-wide (100-mile-wide) Taiwan Strait, which, like the aircraft incursions, it described as a warning to Tsai Ing-wen’s administration.

The U.S. has reinforced its support for Taiwan with military sales. 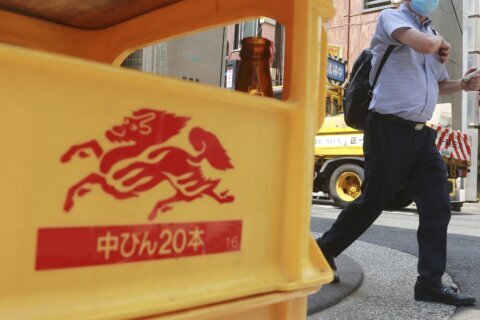