UNITED NATIONS (AP) — North Korea has never been more isolated from the international community as a result of its drastic steps to prevent COVID-19, and the ruptured global ties are having “a dramatic impact on the human rights of the people inside the country,” the U.N.’s independent investigator on the reclusive northeast Asian nation said Friday.

Tomás Ojea Quintana told the General Assembly’s human rights committee and an earlier news conference that North Koreans are facing food shortages and collapses in their livelihoods, and the most vulnerable children and elderly people are at risk of starvation. He said he is also “really, really concerned” about the extent of hunger in political prison camps.

The Democratic People’s Republic of Korea — the North’s official name — closed its borders to prevent the pandemic, which Ojea Quintana said would have “a devastating impact” on the people’s right to health because the DPRK’s health infrastructure suffers from underinvestment and a critical shortage of supplies caused by underlying human rights issues.

“The draconian steps the government of the DPRK has taken to prevent COVID-19 from entering reportedly include a policy of shooting individuals who attempt to enter or leave the country,” he said.

In his final report to the General Assembly after six years as the U.N. special investigator on human rights in the DPRK, Ojea Quintana added that “increased restrictions on freedom of movement and the shutting of national borders has choked market activity that has become essential for people’s access to basic necessities, including food.”

He said North Korean leader Kim Jong Un has recognized the “grim” food situation and is investing in efforts to prevent starvation in the country.

Nonetheless, as a result of the border closures, he said, “the lifesaving humanitarian work of the United Nations and other international actors has also ground to a halt, with no United Nations international staff currently in the country” and diplomats continuing to leave.

“The people of the DPRK should not have to choose between the fear of hunger and the fear of COVID-19,” Ojea Quintana said.

He said the pandemic has demonstrated that the only way to tackle a virus that doesn’t respect international borders is through international cooperation.

“However, the dark irony is that the absence of international personnel can buttress those within the country seeking permanent isolation,” he said.

The DPRK rejected an offer of vaccine from the World Health Organization’s COVAX program, an ambitious project to buy and deliver coronavirus vaccines for the world’s poorest people, Ojea Quintana said, “and there is a discussion about whether the international community should offer North Korea a full-scale vaccination of the population.”

It’s clear the DPRK fears an outbreak of COVID-19 in the country, he said, “and unless all the population is vaccinated it could be the case that borders may continue to be closed.”

Ojea Quintana said there are also some ideas of opening special zones to do trade with China in the border area while protecting the population from COVID-19.

He said trade with China has given North Koreans the opportunity to survive and make a living.

In his report to the General Assembly, the U.N. investigator said he recommended that in light of the pandemic, the Security Council committee monitoring sanctions against the DPRK over its nuclear program “should re-evaluate the sanctions regime under these circumstances, and when necessary to ease those sanctions.”

While humanitarian aid to the DPRK is exempt from sanctions, Ojea Quintana said sanctions have had unintended consequences on ordinary people.

As one example, he said, U.N. sanctions against the export of textiles and seafood — industries where women are the predominant workers — have resulted in women who are family bread-winners losing their jobs.

Ojea Quintana said he recognized the paradox of deteriorating social and economic rights in the DPRK while the government continues to test missiles, “probably diverting resources that should be allocated in those areas.”

U.S. State Department spokesman Ned Price said in response to Ojea Quintana’s report that “the simple truth is that the DPRK regime itself is responsible for the humanitarian situation in the country.”

He said sanctions remain in place, but the United States is involved in efforts to provide humanitarian aid to the neediest North Koreans. 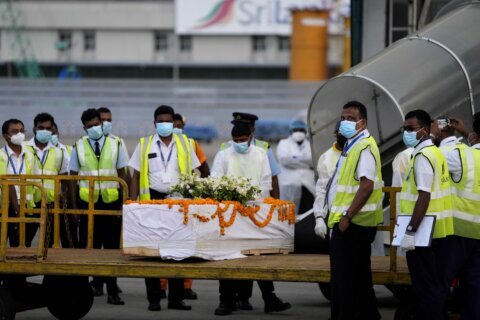