North Korea hit back at U.S. criticism over its test of a submarine-launched ballistic missile this week, saying it was rightfully exercising its rights for self-defense and that the weapon doesn’t specifically target the United States.
Listen now to WTOP News WTOP.com | Alexa | Google Home | WTOP App | 103.5 FM

SEOUL, South Korea (AP) — North Korea hit back at U.S. criticism over its test of a submarine-launched ballistic missile this week, saying it was rightfully exercising its rights for self-defense and that the weapon doesn’t specifically target the United States.

The comments by an unidentified spokesperson of the North’s Foreign Ministry on Thursday came as the U.N. Security Council was set to hold an emergency closed-door meeting over the launch at the request of the United States and the United Kingdom.

Tuesday’s launch of a new ballistic missile from a submarine was the North’s first test of such weaponry in two years and the most significant demonstration of its military might since President Joe Biden took office.

Washington condemned the launch, which underscored how the North continues to expand its military capabilities amid a freeze in nuclear diplomacy, and called for Pyongyang to “engage in sustained and substantive dialogue.”

In comments published by Pyongyang’s official Korean Central News Agency, the North Korean spokesperson said its recent test posed no immediate threat to neighboring countries and that there was no need for Washington to agonize over a weapon that doesn’t specifically target the United States.

The spokesperson said Pyongyang is “truly concerned” over what it sees as an “abnormal” reaction by the United States over a rightful exercise of its rights to defense and described Washington’s efforts to set up the U.N. Security Council meeting as a “provocative move.”

“When doing the recent test-firing, we did not have the U.S. in mind nor aimed at it, but it is the work which had already been planned purely for the defense of the country,” the spokesperson said.

The spokesperson noted that the United States already possesses submarine-launched ballistic missile systems and said it was exposing its double standards by criticizing the North for pursuing the same weaponry. That only raises the North’s suspicions about the sincerity of the Biden administration’s statements that it harbors no hostility toward the North, the spokesperson said.

Ending a months-long lull in September, North Korea has been ramping up its weapons tests while making conditional peace offers to Seoul, reviving a pattern of pressuring South Korea to try to get what it wants from the United States.

Nuclear negotiations between Washington and Pyongyang have stalled for more than two years over disagreements in exchanging the release of crippling U.S.-led sanctions against North Korea and the North’s denuclearization steps.

Since his fallout with the Trump administration, North Korean leader Kim Jong Un has vowed to strengthen his nuclear deterrent in face of what he described as U.S. pressure and threats.

His government has so far rejected the Biden administration’s open-ended offer to resume talks, saying that Washington must abandon its “hostile policy,” a term North Korea mainly refers to sanctions and U.S.-South Korea joint military exercises.

North Korea has been pushing hard for years to acquire the ability to fire nuclear-armed missiles from submarines. The submarine missiles are the next key piece in an arsenal that includes a variety of weapons, including ones with the potential range to reach American soil.

Biden’s special envoy for North Korea, Sung Kim, is scheduled to meet with U.S. allies in Seoul over the weekend to discuss prospects of reviving talks with North Korea. 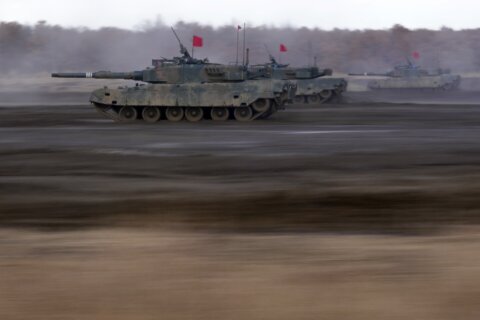