SEOUL, South Korea (AP) — As North Korea goes back to its pattern of pressuring South Korea to get what it wants from the United States, the powerful sister of leader Kim Jong Un has emerged as the face of its campaign of mixing weapons demonstrations and peace offers.

If long-stalled negotiations resume, U.S. and South Korean officials will likely find themselves dealing with Kim Yo Jong, whose promotion to a key government post this week formalized her status as her brother’s top foreign policy official.

Amid a freeze in nuclear diplomacy between Pyongyang and Washington, Kim Yo Jong shocked South Korea in June last year when she ordered the destruction of an empty, South Korean-built liaison office inside North Korea. Weeks later, she said North Korea would never reengage with Washington unless it takes “irreversible steps” to abandon its hostile policy — mainly referring to economic sanctions against the North and U.S.-South Korea joint military drills.

The North has maintained its position until now, while rejecting the Biden administration’s offer to resume talks without preconditions.

This week, she was named a member of the State Affairs Commission, a high-level decision-making body led by her brother.

“Kim Yo Jong’s promotion likely reflects her brother’s assessment that she is effectively performing her role as international spokesperson for the regime,” said Leif-Eric Easley, a professor at Seoul’s Ewha University.

Believed to be in her early 30s, she suffered brief setbacks in January when she lost her position as an alternative member of the ruling Workers’ Party’s powerful Politburo and was demoted to “vice department director” of the party from her previous title of “first vice department director.” Experts speculated Kim Jong Un held her responsible for policy failures or he worried about her too rapid rise.

Kim Yo Jong’s entrance to the commission, an executive branch office that her brother created in 2016 after spending years consolidating his power, could further solidify her political standing, which South Korea’s spy agency described as “North Korea’s No. 2.”

“Her inclusion in the State Affairs Commission will lend further official weight to her statements as she will now be speaking as a foreign policy official formally put in charge to deal with Washington and Seoul,” said Hong Min, an analyst at Seoul’s Korea Institute for National Unification.

In a shakeup announced Thursday, First Vice Foreign Minister Choe Sun Hui, a veteran diplomat who has been deeply involved in the nuclear diplomacy with the U.S., was excluded from the commission. That shows Kim Yo Jong has her brother’s full support in assuming a more decisive role in managing relations with Seoul and Washington, Hong said.

She could also be a special envoy to Washington, playing a role similar to her brother’s top intelligence official who in 2018 helped set up a summit with then-President Donald Trump, the analyst said.

In 2018, she became the first member of the Kim dynasty to travel to South Korea after the 1950-53 Korean War, attending the opening ceremony of the Winter Olympics and meeting with South Korean President Moon Jae-in to convey her brother’s desire for the two to meet.

Analysts say North Korea is reviving its familiar playbook of combining missile tests and peace overtures to win outside concessions from the Biden administration, which has shown no willingness to ease sanctions unless Pyongyang makes progress on denuclearization.

Starting Sept. 11, North Korea has tested a new cruise missile that could potentially carry nuclear warheads, launched a ballistic missile from a train as well as a hypersonic missile still being developed. On Friday, the North said it tested a new anti-aircraft missile, which some experts say was in response to South Korea’s acquisition of advanced U.S. fighter jets.

While offering talks, including an inter-Korean summit and the reconstruction of the destroyed liaison office, Kim Yo Jong said South Korea must first abandon “double-dealing standards” and “hostile polices.” Some observers say she wants South Korea to persuade Washington to relax the sanctions. She also wants South Korea to stop criticizing the North’s weapons development as part of efforts to get an international recognition as a nuclear power.

North Korea has maintained a suspension on the testing of nuclear bombs and long-range missiles targeting the American homeland for more than three years, indicating it wants to keep its diplomatic options with Washington alive. 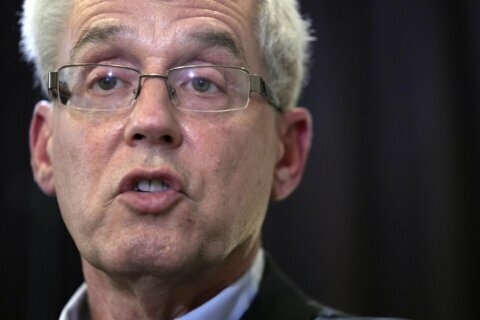