43 countries criticize China at UN for repression of Uyghurs

UNITED NATIONS (AP) — More than 40 mainly Western countries criticized China at a U.N. meeting on Thursday for the reported torture and repression of Uyghurs and other religious and ethnic minorities in Xinjiang, keeping a spotlight on the region where foreign governments and researchers say an estimated 1 million people or more have been confined in camps.

Cuba followed immediately with a statement on behalf of 62 countries saying what happens in Xinjiang is China’s internal affair, and dismissing all allegations as based on “political motivation” and “disinformation.”

China’s U.N. Ambassador Zhang Jun spoke soon after, denouncing “the groundless accusations” and unfounded “lies” and accusing the United States and a few other unnamed signatories of the statement of poisoning the atmosphere of cooperation and “using human rights as a pretext for political maneuvering to provoke confrontation.” He strongly defended the development of Xinjiang, saying the lives of its people are getting better by the day and “your plot to obstruct China’s development is doomed to failure.”

The rival statements spotlight tensions between China and the West over human rights. Those tensions have escalated especially between the United States and China, and include other issues including responsibility for the COVID-19 pandemic, trade, and Beijing’s actions in the South China Sea.

The 43 countries that signed on to the statement criticizing China, which was read by France’s U.N. Ambassador Nicolas De Riviere at a meeting of the General Assembly’s human rights committee, expressed particular concern at “credible-based reports” of the “re-education camps” in Xinjiang.

It was the third time in three years that the U.S. and mainly European nations used the human rights committee meeting to go after China on its repression of the Uyghurs.

“We have seen an increasing number of reports of widespread and systematic human rights violations,” the 43 countries said in their statement, “including reports documenting torture or cruel, inhuman and degrading treatment or punishment, forced sterilization, sexual and gender-based violence, and forced separation of children.”

“There are severe restrictions on freedom of religion or belief and the freedoms of movement, association and expression as well as on Uyghur culture,” they said. “Widespread surveillance disproportionately continues to target Uyghurs and members of other minorities.”

China’s Zhang said Bachelet has “a standing invitation” to visit and “consultations are still going on.”

He stressed that the visit should be “a friendly one” and should not start with “presumed guilt.”

“The barriers are not on the Chinese side,” he said. “If they want to see a visit, they should change their course and they should give up their politicization of this issue and to remove the barriers.”

The Associated Press reported this month following two visits to Xinjiang that four years after Beijing launched the brutal crackdown that swept up to a million or more Uyghurs and other mostly Muslim minorities into detention camps and prisons, China’s control of Xinjiang has entered a new era.

Chinese authorities have scaled back many of the most draconian and visible aspects of the region’s high-tech police state, including razor wire that once ringed public buildings, AP reported. 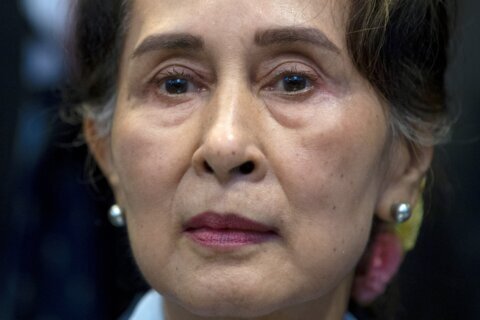 China cleared to play in men’s hockey at Beijing Olympics