The Latest: Chinese city shuts down over new outbreak worry

BEIJING — Officials in the northeast China city of Harbin say national level health officials have been sent to the city to deal with what may be a coronavirus outbreak.

The city of 9.5 million people reported three infection cases Wednesday, a day after discovering a first case of community transmission.

After the initial finding, authorities started mass testing and closed schools. The city also ordered businesses like mahjong parlors, cinemas and gyms to shut. City authorities say residents must display a negative virus test to be able to leave for only essential travel. Otherwise, people are being told to stay home.

China has been able to keep the virus from transmitting widely within its borders through a costly and strict strategy that relies on lockdowns and mass testing.

— China keeps virus at bay, at high cost, ahead of Olympics

HONOLULU — A man who helped organize a Hawaii group that opposes coronavirus vaccines and pandemic restrictions says he now has regrets after contracting COVID-19.

Chris Wikoff told Hawaii News Now this week that he helped start the Aloha Freedom Coalition last October. He says he believed government shutdowns and other restrictions were threatening liberties and harming businesses.

But then he and his wife contracted COVID-19, the disease that is sometimes caused by the virus. Wikoff says he thought he was going to die and he still has trouble breathing.

He is now considering getting vaccinated because his family and doctors recommend it.

Wikoff says he no longer wants to be associated with the Aloha Freedom Coalition. He is warning others in the group not to gather.

The state is currently the only one experiencing “substantial” coronavirus transmission, the second-highest level on the CDC’s color-coded map. So is Puerto Rico. In all other U.S. states, virus transmission is rated as “high.”

State health experts say relatively high vaccination rates in California ahead of the arrival of the delta variant of the coronavirus made a difference. They say additional measures, such as masking, also helped stem the surge.

HONOLULU — Hawaii health care providers are receiving half the number of monoclonal antibody treatments for COVID-19 that they requested amid a shortage of the drugs.

The Honolulu Star-Advertiser reports the federal government has capped Hawaii’s weekly allocation at 680 treatments. The state will have to see whether it can get more supply in the coming weeks.

There has been a spike in demand for the drugs in states where surging hospitalizations among the unvaccinated have overwhelmed hospitals.

The treatments have been shown to reduce death and hospitalization if given early. The drugs are laboratory-made versions of virus-blocking antibodies that help fight infections.

CHEYENNE, Wyo. — Wyoming’s governor has activated the Wyoming National Guard to provide temporary assistance to hospitals that are dealing with a surge of patients with COVID-19.

The Guard members will help with cleanup, food service, coronavirus screening, management of personal protective equipment and other support tasks.

Guard members will serve 14- to 30-day rotations, with the potential to extend through the end of the year.

On Tuesday, 190 people were hospitalized in Wyoming with COVID-19, the sometimes deadly disease that can be caused by the coronavirus. That is down from a recent high of 223 on Sept. 8.

The Winston-Salem Journal reports that Novant Health said Tuesday that 1.4% of its overall workforce, or 375 employees, are not being allowed to work.

Novant announced its mandatory vaccination policy July 22, saying then that it would require full compliance by Sept. 15.

In a news release, Novant Health says the affected workers will have five days to comply with the vaccine mandate. If they don’t get the shot before the deadline, they will be fired.

NEW YORK — A new study of Texas prison inmates provides more evidence that coronavirus can spread even in groups where most people are vaccinated.

A COVID-19 outbreak at a federal prison in July and August infected 172 male inmates in two prison housing units, according to a Centers for Disease Control and Prevention report released Tuesday.

About 80% of the inmates in the units had been vaccinated. More than 90% of the unvaccinated inmates wound up being infected, as did 70% of the fully vaccinated prisoners.

Severe illness, however, was more common among the unvaccinated. The hospitalization rate was almost 10 times higher for them compared with those who got the shots.

It echoes research into a July outbreak in Provincetown, Massachusetts, where several hundred people were infected — about three-quarters of whom were fully vaccinated.

Such reports have prompted a renewed push by health officials for even vaccinated people to wear masks and take other precautions. They believe the delta variant, a version of coronavirus that spreads more easily, and possibly waning immunity may be playing a role.

The authors did not identify the prison, but media reports in July detailed a similar-sized outbreak at the federal prison in Texarkana.

OKLAHOMA CITY — Fans of the NBA’s Oklahoma City Thunder will be required to provide proof of a COVID-19 vaccination or a negative coronavirus test to attend games in person, the team announced Tuesday.

“As we continue to face serious health challenges from COVID-19, we must remain committed to protecting the health and safety of our community,” Thunder Chairman Clay Bennett said.

The policy will be in effect for the first 12 games of the preseason and continuing into the start of the regular season.

The number of hospitalizations has declined from a three-day average of nearly 1,600 on Sept. 1 to 1,327 on Tuesday, according to the health department, which announced a virtual career day on Sept. 29 in an effort to hire 70 nurses statewide.

SEATTLE — Seattle Mayor Jenny Durkan said Tuesday the city’s eviction moratoriums will remain in place through Jan. 15, 2022, rather than expiring at the end of September.

The Seattle Times reports Durkan extended the moratoriums with an executive order. She cited the spread of COVID-19’s delta variant and an ongoing effort to distribute rent assistance to tenants who are behind on their payments.

As many as 60,000 Seattle-area residents are in households with rental debt, according to a survey last month.

Seattle’s moratoriums on most residential evictions and some commercial evictions have been extended six times since they were established in March 2020.

The city’s moratoriums apply to residential, nonprofit and small-business tenants, with small businesses defined as those with 50 or fewer employees.

Most evictions are prohibited for those tenants, including evictions for nonpayment of rent, though tenants remain legally obligated to pay rent and can accumulate

COLUMBUS, Ohio — Gov. Mike DeWine on Tuesday painted a picture of a very different pandemic than the one Ohio saw in the fall of last year at the peak.

The data now shows younger patients being hospitalized and put on ventilators in nearly every corner of the state. From September 5 through September 11. data shows 230 Ohioans 39 years of age and younger were admitted to the hospital.

“This is the highest number of admissions for COVID in this age group during the entire pandemic, even higher than during the winter surge levels when no one was vaccinated,” DeWine told reporters during a press briefing.

The overwhelming majority, around 97%, of hospitalization are among patients who have not been vaccinated. Preliminary data also shows the death rate among the unvaccinated, younger patients is also hitting record highs.

As of Tuesday, more than 62% of Ohioans 12 years and older have received at least one dose of the COVID-19 vaccine. But that rate, according to DeWine and medical professionals, is not high enough to defeat the delta surge as misinformation about the vaccine and vaccine hesitancy continues to rise.

SAN FRANCISCO — San Francisco is requiring all workers at San Francisco International Airport to get vaccinated against COVID-19. Employees who are exempt must undergo weekly testing.

The mandate announced Tuesday applies to roughly 46,000 on-site personnel, including employees of contractors and retail tenants.

Mayor London Breed’s office said the mandate is the first for a U.S. airport and goes into effect immediately.

Some airlines have already announced vaccination mandates for employees.

San Francisco also requires its municipal workers to be inoculated.

LONDON — Bishops of the Church of England have joined calls for world leaders to fulfill promises made to reduce global vaccine inequality.

The bishops voted unanimously Tuesday to endorse a statement made by two Church of England bodies demanding an emergency meeting of the G7, the club of wealthy democracies including Canada, the US and the UK, to commit to fulfilling vaccine equity promises.

G7 leaders promised in June to donate over one billion vaccine doses to lower-income countries. Only 15% of this promised figure has so far been administered.

World leaders currently attending the UN General Assembly in New York are expected to decide Wednesday on whether to call an emergency G7 meeting to address the issue.

Vaccination coverage in Africa remains at 5%, while 80% of the world’s 5.5 billion vaccine doses were administered in high and upper-middle-income countries.

“Rich nations are still on track to amass an excess of one billion vaccines by the end of the year,” the statement said. “Rich nations must not hoard the surpluses amassed.”

BEAVER DAM, Wis. — A Beaver Dam Unified School Board member has resigned, citing safety concerns over his support for mandating masks for students in the district’s schools.

Tony Klatt has twice voted in favor of the mask mandate for Beaver Dam school and says he still feels strongly that it was the right decision based on “facts at hand.”

Klatt, who has been on the board since April 2019, posted on his Facebook page last week that decisions made because COVID-19 have definitely been challenging, but the decisions were not made lightly and were based on feedback and information.

About his resignation, Klatt wrote that “when there is talk of protesting my house and someone later pulls in front and takes a picture of my address while my daughter is home alone, she does not feel safe.”

He said his family doesn’t feel safe when a car sits idling in front of his house late at night, the State Journal reported.

Little announced the additional money on Tuesday, saying the funds will help ease the burden on hospitals and other health care providers. The number of people hospitalized with coronavirus has been steadily increasing, with a record of at least 717 patients reported statewide last week.

With a record number of COVID-19 patients in Idaho’s intensive care units, the state recently entered a “crisis standards of care” designation that allows hospitals to begin health care rationing as needed.

Nearly all new cases, hospitalizations and deaths have been among unvaccinated residents, the governor’s office says. Idaho’s vaccination rate remains one of lowest in the nation, with only about half of the eligible residents fully vaccinated. 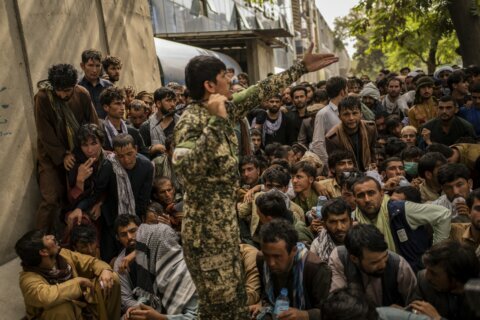 The economy on the brink, Taliban rely on former technocrats