Wall street closed out a choppy week of trading Friday with a mixed finish for the major stock indexes, though the S&P 500 managed its first weekly gain in three weeks.

The benchmark index rose 0.1% after spending much of the day wavering between small gains and losses. The Dow Jones Industrial Average also eked out a 0.1% gain, while the Nasdaq composite and the Russell 2000 index of small-company stocks fell.

Slightly more stocks in the S&P 500 rose than fell, with communication services companies and banks driving much of the increase. Health care and real estate stocks posted some of the biggest losses. The index ended with a 0.5% gain for the week.

The modest showing followed a two-day rally that helped erase a slump earlier in the week. Investors have been facing similar choppiness throughout September as they try to gauge how the economy will continue its recovery.

Markets have had a rough September and investors could be in for more choppiness as they work through a mix of concerns, including COVID-19 and its lingering impact on the economy, along with a slow recovery for the employment market.

Traders did receive some clarity from the Federal Reserve this week. After its two-day policy meeting concluded Wednesday, the central bank said it will likely begin tapering the pace of its monthly bond purchases soon, but not before November, if the economy keeps improving. The Fed and other central banks have been buying bonds throughout the pandemic to help keep long-term interest rates low.

Bond yields have been headed higher the last couple of days following the Fed’s announcement. The yield on the 10-year Treasury rose to 1.46% Friday from 1.41% the day before. The yield, which influences interest rates on mortgages and other consumer loans, was at 1.31% late Monday.

“It could simply be that we had yields come down Monday and Tuesday in a flight to safety that is now being unwound,” Stovall said. “At the same time, bond investors have been given the clue, if you will, by the Fed, that tapering is right around the corner.”

Nike was the latest company to warn investors about supply chain problems hurting revenue. Its stock slumped 6.3% for the biggest drop in the S&P 500. A wide range of industries face supply chain issues and that has investors worried about rising costs for businesses and consumers. Analysts have warned that the upcoming round of corporate earnings could be crimped because of those issues.

Worries over troubled Chinese real estate developer Evergrande are also weighing on sentiment. Some Chinese banks on Friday disclosed what they are owed by Evergrande, seeking to dispel fears of financial turmoil as it struggles under $310 billion in debt. Evergrande has said it negotiated details of an interest payment due Thursday to banks and other bondholders in China but gave no details. The company has yet to say whether it will make an $83.5 million payment that was due Thursday on a bond abroad.

Markets in Europe fell and markets in Asia were mostly lower, though Japan’s Nikkei 225 rose 2.1%.

Cryptocurrencies fell after China’s central bank declared all transactions involving virtual currencies illegal as it stepped up a campaign to block use of unofficial digital money. Bitcoin fell 4.8% to $42,525.48, according to Coindesk. Chipmaker Nvidia, which makes processors needed in crypto-mining, fell 1.8%. 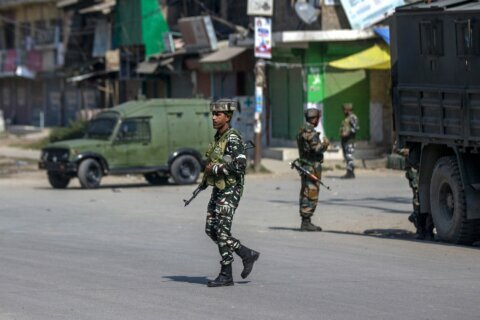 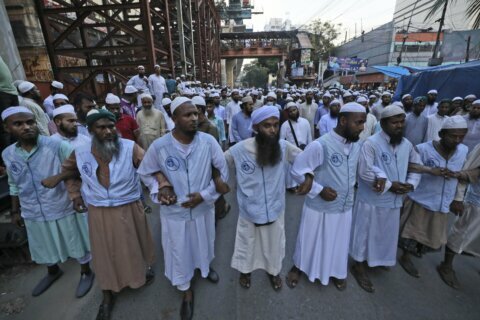